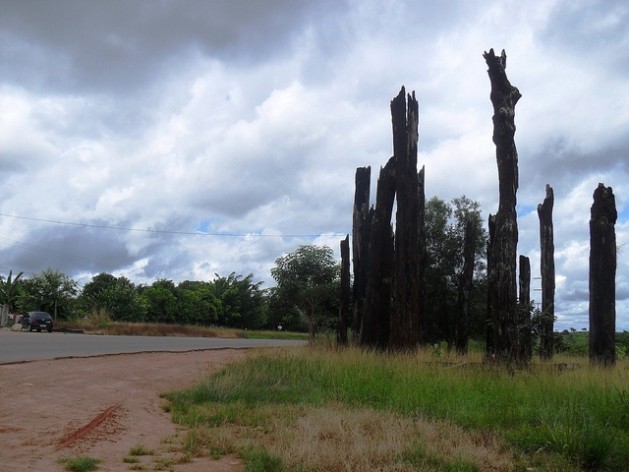 Route PA-150 joined the city of Marabá and the town of Parauapebas, in the southeast of the Amazonian state of Pará, the location of some of the country’s largest mining and ranching projects.

On that day in 1996, at a spot known as the “S” curve on route PA-150 in Eldorado dos Carajás municipality, 800 kilometres from the state capital Belém, 150 police officers opened fire on some 1,000 demonstrators belonging to the Landless Rural Workers Movement (MST) who were blocking the road.

Nineteen people were killed and 70 were wounded. The demonstrators were on their way to Belém to demand the expropriation of the Macaxeira estate in Curionópolis, close to Eldorado, already under occupation by 1,500 families, and the distribution of its land under the land reform laws.

The tragedy placed land reform on the political agenda of this South American country, and Apr. 17 was named International Day of Peasant Struggle.

The settlement was created nearly two years after the massacre, when the National Institute for Colonisation and Land Reform (INCRA) declared the Macaxeira estate unproductive, a necessary condition for expropriation according to the land reform laws.

Some 700 previously landless families are now settled on 37,000 hectares of the estate which the MST activists occupied in 1996. Today they are struggling to survive, without sources of employment or support to make their plots of land productive.

Ivagno Brito, the son of peasants, was 13 years old when he witnessed the massacre. Today he is 30, and dedicated to the MST cause.

“People were desperate, it was sheer madness. Imagine the scene, a whole bunch of people in the crossfire. What affected me most was seeing women and children taking cover in a small chapel that no longer exists,” said Brito, pointing out the exact spot of the massacre on the “S” curve.

“I can’t forget it. I lost my head. I couldn’t find my father and I began to run…Later on I found myself in the bushes,” he told IPS.

Maria Zelzuita, 48, was also there. “They wanted us to clear the road but we were on foot. So the police decided to open fire to clear it. What I can’t forget was the people screaming and the children crying for their mothers,” she said.

“There were already people dead on the asphalt. I took four little children by the hand to rescue them. I ran off the road towards the bushes, and we also carried a boy who had been shot.”

Zelzuita has a plot of 25 hectares of land where she grows rice, cassava, maize and pumpkins.

But experience has shown that it is not enough to distribute land without providing the instruments and knowledge to develop sustainable agriculture.

Zelzuita works in partnership with the people in the settlement. She earns a living as an assistant cook at the local school, and she is also a student and a single mother of three. At home she has piped water and electricity.

“I am happy to be a settler; I have somewhere to live and raise my children. Before I did not have this, and I can’t imagine myself in a city. But there is no employment here, and many people have to go to the cities to find work,” she told IPS.

In the face of these difficulties, many INCRA settlers have sold their lots and left. The sale of plots in the land reform settlements is a frequent occurrence in Pará.

Forty-nine-year-old “Dona” Rosa Costa Miranda has no plans to leave the rural area, but she was overwhelmed by the effort it took to cultivate a vegetable garden in such poor soil, so she decided to rent her land for grazing cattle.

“Today I have a plot of land and a house. I produce hardly anything because I am on my own, but I rent it out. Life in the settlement is hard because there is no work. Some people owe money to the bank and have no way of making payments,” she told IPS.

Dona Rosa was born in Maranhão, in the arid Northeast, the poorest part of Brazil. At the age of 16 she came to Pará with her husband, a farmer. She took part in the occupation of the Macaxeira estate, and on the day of the massacre she was one of the women who hid in the small chapel.

Recently, Dona Rosa got funds to plant “cupuaçu”, an Amazonian fruit. But a slash-and-burn fire lit by her neighbours – a common practice to clean and prepare the land for cultivation – spread out of control and burned her fruit trees.

In spite of the difficulties, “this is better than living on the outskirts of cities or in the favelas (shanty towns). Having a plot of land nowadays means security. I don’t plan to move. City streets are very dangerous,” she said.

Expropriating unproductive portions of estates and redistributing the land is a slow process that can take up to a decade.

The creation of the 17 de Abril settlement was achieved “two years after the massacre because of the blood that was spilt. People in some encampments have been waiting for 12 years and land reform has still not arrived for them,” Dona Rosa said.

The Amazon region is no longer what it was when she first arrived from the Northeast. To reach Assentamento 17 de Abril, you drive through small villages and urban areas that have sprung up along the side of the road, like Sororó, Eldorado dos Carajás and Curionópolis, places where there is heavy traffic of trucks loaded with minerals.

The former route PA-150, now paved federal highway BR-155, passes close by the industrial district of Marabá which has 12 steelmaking plants and large ranching properties, all of them in the middle of Amazonia.

The view from Marabá is a landscape of pasture, without a single tree. “It’s changing a lot, that’s why we’re dying of drought. In a few years’ time there won’t be any rain, because there aren’t any trees,” Dona Rosa complained.