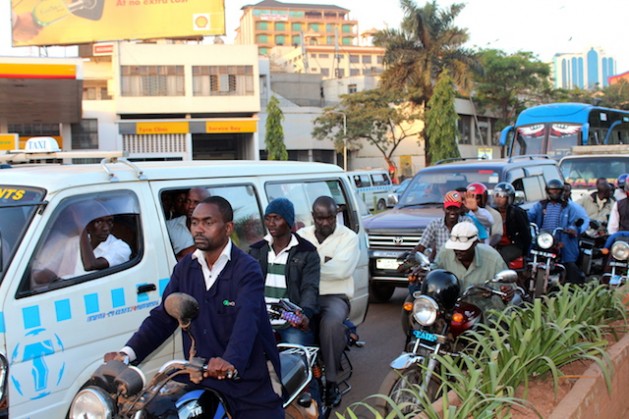 Uganda’s inadequate road infrastructure has been blamed from the increased traffic congestion in the country, especially in the capital, Kampala. Credit: Amy Fallon/IPS

And the unbelievable: “No jam.” But as long as Kampala motorists and pedestrians are talking traffic, the eight Ugandan creators of new app called RoadConexion, are happy. For the time being, anyway.

“A problem we have here in Uganda is the roads, the infrastructure is terrible,” Lynn Asiimwe, the lead developer tells IPS.

“This is mainly the effect of bad governance and corruption. The effects are traffic jams, incomplete roads, and potholes everywhere.”

The 25-year-old, who is pursuing a master’s degree in inclusive innovation at the Graduate School of Business in the University of Cape Town, South Africa, works as a software developer with Access Mobile, a mobile technology company.

Asiimwe and her team worked on the app for free “out of passion”. And she hopes that the app, which won the Tech4Governance hackathon, a competition run by a local technology innovation hub called Hive Colab, will make leaders face up to these problems.

In 2010, President Yoweri Museveni promised to launch an investigation into corrupt road builders.

And in 2011 local newspaper, The Independent, stated that according to the Auditor General, money for maintaing road infrastructure was not well spent and that there were “alarming disparities in costs” as well as “shoddy standards, poor and late delivery by numerous contractors.”

But first RoadConexion needs to get people chatting.

The app lets users submit and receive real-time traffic reports on road repairs, accidents and traffic jams on almost any Kampala road featured on Google maps via the internet. Motorists and pedestrians can log into the site using Twitter and Facebook.

“We’re trying to get users engaged in the beginning,” says Asiimwe.

“If people realise that the traffic’s really bad they might start a conversation on their own and this conversation will hold these leaders accountable.

According to local newspaper, the Monitor, there were 16,765 reported road accidents in Uganda in 2012, leaving thousands dead and hundreds maimed.

Asiimwe believes that corruption has led to “under-qualified companies taking on road works which leads to [sub-standard] work being done.”

“These roads tend to degrade in a few months leading to potholes and other forms of degradation. This degradation can’t handle the level of traffic, which results in traffic jams.”

Asiimwe adds: “These companies doing [sub-standard] road work need to be held accountable and we are trying to achieve that with RoadConexion.”

One bad example is a patch of road near Makerere University in central Kampala, where work was supposed to be completed by an international contractor by October last year but is yet to even commence.

“They already have the big banner up there saying who the contractor is, what they’re doing, how long the work is supposed to be for,” Asiimwe says.

“But when we got in touch they said ‘oh, we got into a few difficulties, funding didn’t come through on time’.

“The road is really dusty, the potholes are still there, but no one is letting the users know what’s going on.”

Currently RoadConexion receives between 50 to 100 views daily through computers and mobile phones, with most users checking in before the morning rush.

“Most people want to view, but few want to submit,” says Asiimwe.

“I’m realising that in Uganda we’re used to consuming, we’re not used to this mentality of sourcing,” Asiimwe says.

The development of RoadConexion follows the 2012 launch of Ma3Route, an app for Kenyan users. The mobile, web and SMS platform crowd-sources transport data and provides Nairobi road users with information on traffic, directions and driving reports.

“My desire to build a tool to help commuters in developing countries was further strengthened after I bought my first car once I got my first job and witnessed first-hand all the hours drivers waste in sometimes avoidable traffic due to lack of information,” creator Laban Okune tells IPS.

Okune, who grew up in Butere, a town in Kenya’s Western Province and went to Nairobi to study computer engineering, resolved to build a “triple threat tool” addressing traffic, directions, and reckless driving challenges faced by commuters in developing countries.

“The final straw was the road carnage witnessed in Kenya. Public transport vehicles traverse the roads, stuffed with people, swerve and overlap recklessly, causing them to roll off the road and spill passengers onto the ground.

“We lose so many lives.”

At least 2,000 in the space of nine months alone, according to one newspaper report.

Ma3Route users can receive directions and alerts on specific roads, report bad driving and even search number plates before they board a bus to check a driver’s track record.

Okune hopes to expand to other parts of Kenya. Ma3Route also has its sights set on Kampala and Dar es Salaam in Tanzania.

Fexlix Odongkara, director of the Automobile Association of Uganda, believes that traffic apps could be a good alternative to traffic reports on the morning and evening radio stations.

“Traffic jams in Uganda are getting worse. I’ve lived in this city for more than 30 years and every year it gets worse,” he tells IPS.

“The roads are not expanding in relation to the [increased number of] cars and the people. Apart from the small matatus and the bodabodas, there’s no public transport. Families bring all the cars into town.”

He said the only shortcoming of apps like RoadConexion will be that many people don’t have access to the internet at home or even in their offices. And if they do, some may not want to report traffic conditions because they may have already reported accidents to the police and are treated like suspects.

The World Bank has forecast traffic-related deaths will increase by 80 percent by 2020.

Odongkara says the biggest problem when it comes to Uganda’s roads is that too many people don’t know how to drive properly.