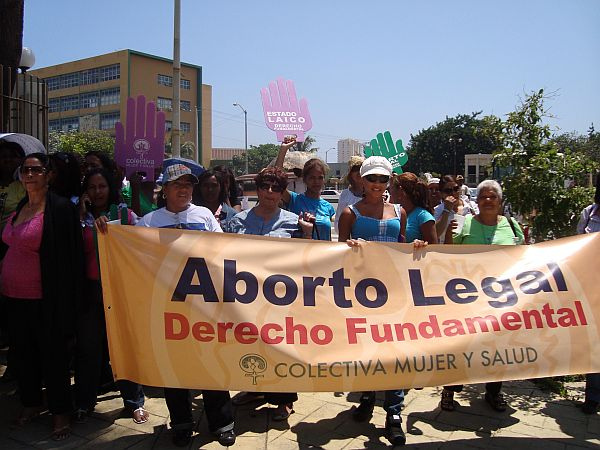 WASHINGTON, Mar 26 2014 (IPS) - Lawmakers and civil society leaders from over 30 countries are calling for universal access to safe, legal abortion.

The declaration, released in Washington on Wednesday, comes in the context of a 20-year review by the United Nations of the 1994 International Conference on Population and Development (ICPD) in Cairo. That landmark conference called for safe access to abortions in countries where the procedure was legal, while Wednesday’s declaration calls for the decriminalisation of abortion in all countries.

The declaration also anticipates the post-2015 development agenda. Advocates are calling to expand the discussion on women’s health to include abortion rights when determining the next round of global development goals, following the expiration of the Millenium Development Goals (MDGs).

“True gender equality cannot be achieved without access to safe, legal abortion,” it says. “In the last two decades, roughly 1 million women and girls have died and more than 100 million have suffered injuries – many of them lifelong – due to complications from unsafe abortion.”

Advocates are now planning to formally offer these recommendations at a 20-year anniversary summit of the original ICPD. That event will take place in Addis Ababa next month.

“Looking ahead to ICPD+20 and the review of the Millennium Development Goals, the one goal they would not take was reproductive and sexual health for all,” Nafis Sadik, the special advisor to the executive director of UNAIDS and the former executive director of the United Nations Population Fund, told IPS.

“Regarding the problem of U.S. policy – it’s not just the financial support, but the moral leadership,” Sadik says. “It makes a big difference if the U.S. becomes restrictive in areas of support, if they restrict funding for any NGO that provides abortion.”

The Airlie Declaration was composed following a two-day conference near Washington. It was written by representatives from over 30 countries, including health ministers, members of parliament, and medical leaders as well as advocates from the United Nations lawmakers and civil society.

“Our goal is to bring this message forward and build a broader coalition,” Elizabeth Maguire, the president of Ipas, an international NGO dedicated to ending preventable deaths and disabilities from unsafe abortions, told IPS. “Every participant is committed to pursuing action.”

One such participant is John Paul Bagala, president of the Federation of African Medical Students’ Associations. Bagala works in a hospital in northern Uganda that treated 480 women from cases of unsafe abortions in 2011-12 and another 500 in 2012-13.

According to Bagala, providing access to safe abortion is cost-effective. Treating injuries resulting from an illegal abortion in Uganda can cost more than 100 dollars, he says, while the cost of a safe abortion would be less than 10 dollars.

“As a medical student in Africa, we are taking a stand to disseminate the declaration in our respective institutions,” Bagala told IPS.

“To drive [out] stigma from our health workers when they are still in the training system, to ensure that the women, when they come for service, get the best service they need in terms of safety and quality. We are driving towards integrating the aspects of this declaration in terms of reproductive health rights into the curriculum of training health workers in Africa.”

Deuba recounted the story of a young girl in Nepal who was jailed for 12 years after she was raped and unsuccessfully attempted an illegal abortion. The girl’s story gained international attention, and Nepal eventually decriminalised abortion in 2002.

She says Nepal’s success comes not just in the growth of medical services but in the country’s changing cultural attitudes toward abortion.

“What we know now is that law changes social attitudes,” Deuba said.

“I work at the community level and workers tell me there is no more stigma, that abortion is seen as part of women’s rights, that women are more vocal about abortion … it’s seen as part of the continuum of care. Now women don’t have to die anymore and there is a feeling of confidence and security among women.”