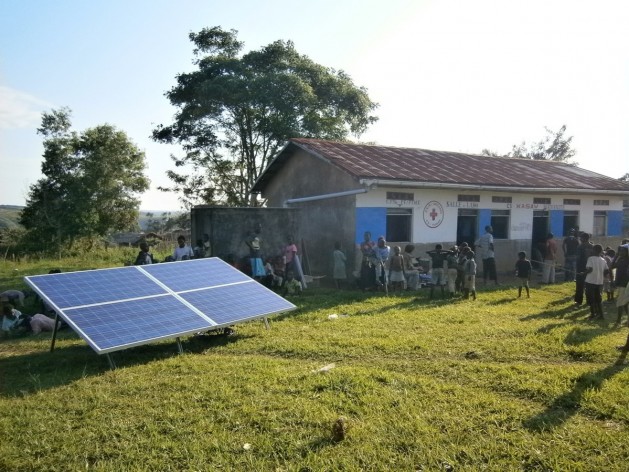 PARIS, Mar 18 2014 (IPS) - Hervé Gouyet knows firsthand the difference electricity can make in the lives of both isolated rural communities and those who have just suffered a natural disaster.

“Energy is now seen as an indispensable element to achieving all the other development objectives."

Gouyet is the president of the French non-governmental organisation Electriciens sans Frontières (Electricians Without Borders), whose self-imposed mission is to provide electricity to the world’s poor via renewable energy systems.

Working with a thousand volunteers, the group has installed solar panels in villages around the world, from Nepal to Peru. Its members stress that energy plays a key role in development, even if this was not included in the United Nations Millennium Development Goals (MDGs) – the internationally agreed objectives that should come to fruition in 2015.

“At first, energy was not seen as a direct goal, but that viewpoint has changed over the years, especially with the concerns about climate change,” said Gouyet, who also works as an electrical engineer for French utility giant EDF (the state-owned company contributes financial support through a foundation, along with other donors).

“Energy is now seen as an indispensable element to achieving all the other development objectives,” Gouyet told IPS. These include eradicating extreme poverty and hunger, achieving universal primary education, improving maternal health and ensuring environmental sustainability.

At a conference in Paris, international experts stressed the role of renewable energy as a “remedy to economic crises” and as a means to “advance society”. Organised by the France-based Syndicat des énergies renouvelables (renewable energies union), the meeting was heavy on technical terms, with “megawatts” and “gigawatts” being tossed around.

For Electriciens sans Frontières, which was present at the conference, the stated goals are quite prosaic, however: providing electricity so that individuals can lead better lives, including after catastrophes.

“Access to energy offers a widespread solution to economic, environmental and human development problems,” the NGO says. “By lighting school classrooms and hospital operating rooms and by providing access to clean water, electricity contributes to improving the living conditions of the poor.”

In Haiti, the organisation has installed 600 street lamps in the camps where thousands still live after the 2010 earthquake. During the day, solar panels capture the sun’s energy, which is then stored in batteries and subsequently used during the night to power the street lamps.

The lighting affords some security to women and girls in an environment where sexual assault is an ever-present risk. Two hundred additional street lamps will be put up this year, at the request of local officials.

Electriciens sans Frontières is also helping to provide electricity to schools, again through photovoltaic systems, working with the World Bank and other institutions to restore Haiti’s educational system. The group was already present in the country before the earthquake and was able to respond quickly, Gouyet said.

The focus on renewable energy to improve the lives of people living in poverty is clearly a goal for many governments who have signed onto the U.N. Secretary-General’s Sustainable Energy for All initiative. But heightened global cooperation is needed, said Adnan Amin, director general of the four-year-old International Renewable Energy Agency (IRENA).

“If we continue with the current system, we will not achieve energy access and we will not achieve sustainability,” he said at the Paris conference. “We need to find sustainable ways of providing energy to those people in the world who do not have access to modern energy services.”

According to U.N. figures, 1.3 billion people remain without access to electricity, mostly in developing countries; and natural disasters can exacerbate the already bad conditions.

In the Philippines, following the devastation of Typhoon Haiyan/Yolanda in November, Electriciens sans Frontières has cooperated with other NGOs such as Doctors Without Borders to provide electricity to medical centres and also to makeshift schools. Because of the scale of the destruction, they’ve used both generator sets and solar-powered lamps.

The first team of volunteers installed lighting in the healthcare tents set up around the Guiuan hospital, which was destroyed by the typhoon. They also wired the operating and delivery rooms, and the maternity ward welcomed its first four babies that same evening, volunteers told IPS.

Four months after the disaster, “a growing sense of recovery is notable in the reopening of health centres, clean water flowing again through community taps, children back to learning in temporary schools,” according UNICEF, the U.N. Children’s Fund.

Still, it will be a long road to full recovery as the typhoon hit several of the country’s poorest areas, where even before the disaster “some 40 per cent of children were living in poverty,” said Abdul Alim, UNICEF’s acting representative in the Philippines.

In a report released this week, UNICEF outlines the work it and NGOs have done in providing 930,000 people with access to safe water and in delivering hygiene supplies to more than 231,000 children across schools and “child-friendly spaces”.

Meanwhile, Filipino officials joined Electriciens sans Frontières in Paris last week to discuss the impact of the measures taken so far. “I think re-installing electricity is one of the most important things after a calamity because it’s that which allows all the other work to be done,” said Rapunzel Acop, the Philippines’ vice-consul to France.