Brazil will experience major shifts on the energy front in the next two decades, largely due to the exploitation of its vast deepwater oil reserves, says the latest International Energy Agency report. 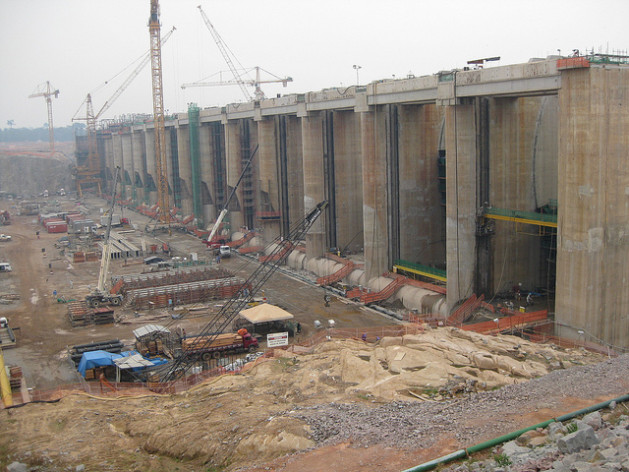 The mega hydropower dams under construction in Brazil, like the Santo Antônio dam, are just one aspect of the energy revolution that the country will undergo in the next few decades. Credit: Mario Osava/IPS

WARSAW, Nov 15 2013 (IPS) - Energy consumption and production are undergoing fundamental shifts but the world is still on course to a 3.6 degree C hotter climate according a report released during the U.N. climate talks in Warsaw.

Brazil will play a major role in quenching the developing world’s growing thirst for oil, says the International Energy Agency’s (IEA) 2013 edition of the World Energy Outlook. This edition of the report looks to the year 2035 and projects that the biggest future consumers of oil and gas will be India and countries in Southeast Asia and the Middle East.

While low-carbon energy sources – renewables and nuclear – will meet around 40 percent of the growth in global energy demand, carbon emissions will still be 20 percent higher in 2035 from the energy sector. And that’s assuming countries achieve all of their current 2020 reduction targets. Countries like Canada will not.

Emissions need to peak and decline by 2020 to have a good chance of keeping global temperature rise to less than 2.0 degrees C according to the U.N. Environment Programme (UNEP) Emissions Gap Report 2013, released Nov 5.

“If we stay on the current path, we will not come close to the internationally agreed goal of limiting the rise in global temperatures to two degrees C,” IEA Executive Director Maria van der Hoeven said in a statement published Nov. 12 at the 19th session of the Conference of the Parties (COP 19) to the U.N. Framework Convention on Climate Change (UNFCCC), which will run through Nov. 22 in Warsaw.

Fossil fuel subsidies, which amounted to 544 billion dollars globally in 2012 alone, are the biggest barrier to staying below two degrees. These government subsidies keep the cost of fossil fuels artificially low, undermining the benefits of improving efficiency and installing renewable energy sources, the IEA report notes.

“In Bolivia diesel, gasoline and natural gas are heavily subsidised, so it is almost impossible to work with renewable energy sources,” said Dirk Hoffmann, director of the Instituto Boliviano de la Montaña in La Paz, Bolivia.

The IEA report has a special section devoted to Brazil saying it will become a global energy superpower. Offshore oil deposits will lead to a tripling of oil production by 2035, making Brazil the world’s sixth largest producer. Natural gas production will increase five-fold by 2030, more than enough to meet Brazil’s needs, it says.

Energy consumption in Brazil will skyrocket 80 percent with the average electricity consumption doubling with a vastly larger middle class. Investments of 90 billion dollars a year and improved energy efficiency will be needed to achieve all this, the report concludes.

Remarkably Brazil will still be a low-carbon country. It is currently the world leader, with 42 percent of its energy from renewable sources – mainly hydropower, biomass and biofuels. In future, due to environmental considerations Brazil will be less reliant on big hydro projects and will shift to onshore wind and electricity from biofuels, the report says.

Brazil’s Ten-Year Energy Expansion Plan that ends in 2020 prioritises hydropower, wind power and biomass. These measures are expected to reduce projected emissions by 234 million tons of CO2 by 2020, a spokesperson for the Brazilian government told Tierramérica.

“Wind, thermal biomass and small hydroelectric plants together will double from eight percent to 16 percent,” she said.

Latin America could be powered by 100 percent renewable energy, a number of studies have shown, including the 2012 Global Energy Assessment, the most exhaustive integrated energy assessment ever done. By 2050 at least 60 percent, and up to 100 percent, of Latin America’s energy needs could be met by renewables, it found.

However, if large hydro is excluded, less than 10 percent of energy in South America is from renewables.

While nearly every country has said it wants to have more clean sources, subsidies for fossil fuels distort the market, according to the report Renewable Electricity Generation in South America. Written by experts in Germany, Chile, Brazil and Bolivia, it says these subsidies are far larger than existing incentives or tax benefits designed to encourage renewables.

Another barrier is getting investments in renewables, especially from outside the country. Better regulations and incentives to respond to changing market conditions are needed, the report says.

Greening South America’s energy mix would accelerate with the expected 2015 climate treaty requiring developing nations to reduce emissions. However domestic considerations, including the rising costs and impacts of fossil fuels, ought to increase interest in expanding the green energy sector, the report concludes.