WASHINGTON, Mar 7 2014 (IPS) - The U.S. government is in the final stages of weighing approval for an overhaul of regulations governing the country’s poultry industry that would see processing speeds increase substantially even while responsibility for oversight would be largely given over to plant employees. 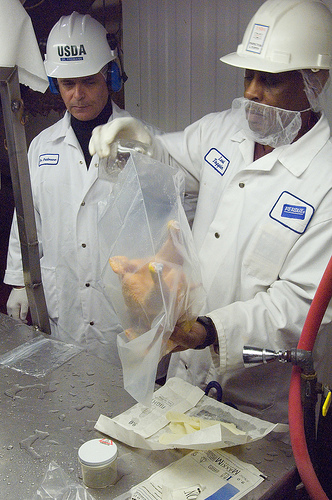 The plan, which was originally floated by the U.S. Department of Agriculture (USDA) two years ago, is currently slated to be finalised by regulators next month. Yet opposition has been heating up from lawmakers as well as labour, public health and consumer advocacy groups.

On Thursday, over 100 such groups and businesses delivered a letter, along with nearly 220,000 petitions, to President Barack Obama, asking that the proposal be withdrawn.

“The proposed rule puts company employees in the role of protecting consumer safety, but does not require them to receive any training before performing duties normally performed by government inspectors,” the letter states.

“And lack of training is not the only impact this rule will have on workers. Increased [production] speeds will put worker safety in jeopardy … This proposed rule would let the fox guard the hen house, at the expense of worker safety and consumer protection.”

The proposed rule would see top chicken-processing speeds increased from the current 140 per minute to as high as 175. The rule would also decrease the number of federal inspectors assigned to processing plants by 75 percent, leaving the slack to be picked up by company employees.

The poultry industry has reportedly been pushing for these changes for decades. In return, the government would require that processors bathe each chicken carcass in chlorine and other chemicals, aimed at killing any pathogens that remain on the bird.

Last week, Bennie G. Thompson, a member of Congress, warned that the USDA is “unnecessarily endangering the lives of millions of Americans”.

Federal pilot projects have been testing the new approach since the late 1990s. Yet critics warn that the results have been far less clear-cut than either the government or the industry has suggested.

“We did a snapshot analysis of how many defects employees were missing at these pilot plants, and found there was no consistency,” Tony Corbo, a senior lobbyist Food & Water Watch, an advocacy group, told IPS.

“In one turkey plant, for instance, there was a 99 percent error rate for one inspection category. We became concerned that the USDA was moving forward too fast with this change.”

“The industry says there’s no safety problem, but they’re in denial." -- Tom Fritzsche

The USDA “has not thoroughly evaluated the performance of each of the pilot projects over time,” the Government Accountability Office (GAO) warned in a report published in August, the second time it had come out with such findings.

“GAO identified weaknesses including that training of plant personnel assuming sorting responsibilities on the slaughter line is not required or standardized and that faster line speeds allowed under the pilot projects raise concerns about food safety and worker safety.”

In response to the report, the poultry industry noted that the USDA had already updated its analyses in support of the new rule, and that the sector’s safety record is not linked to processing speeds.

“Over the past 14 years of this pilot program there has been no evidence to substantiate the assertion that increased line speeds will increase injuries,” Ashley Peterson, a vice-president with the National Chicken Council (NCC), a trade group, said in a statement.

(The NCC has published responses to criticisms of the proposed regulatory changes here.)

For the moment, the Obama administration appears set on pushing through the new rule, characterising it as a cost-cutting measure.

Under the president’s new budget proposal, released earlier this week, the USDA’s inspections funding would be cut by nearly 10 million dollars, despite the fact that no rule has yet been finalised. Earlier, the federal savings have been estimated even higher – some 90 million dollars over three years.

For major poultry companies, meanwhile, speeding up processing speeds would save more than 250 million dollars a year.

“This proposal has us very concerned, as there are already pending requests with the regulators to require a reduction in these work speeds,” Tom Fritzsche, a staff attorney with the Southern Poverty Law Center, a watchdog group, told IPS.

“The health consequences for workers are already very severe, and the concern is that those injury rates are going to go way up. We’re joining other groups in asking whether the same hazards would be so prevalent if the poultry workforce were not made up mostly of women of colour.”

Last year, Fritzsche authored a study on poultry workers in the state of Alabama, three-fourths of whom said they had experienced injury or illness due to their work. Three-quarters also said that the speed of the processing line made their job more dangerous, in addition to broader allegations of egregious safeguards.

Workers “describe what one called a climate of fear within these plants,” the report states. “[E]mployees are fired for work-related injuries or even for seeking medical treatment from someone other than the company nurse or doctor … they describe being discouraged from reporting work-related injuries.”

The report calls poultry workers “among the most vulnerable” in the United States.

“The industry says there’s no safety problem, but they’re in denial. There is a huge and well-documented undercounting in employer-reported data,” Fritzsche says.

“Workers are repeating the exact same motion between 22,000 and 100,000 times per shift, and can develop some permanent disabilities from these repetitive motions. One study out of South Carolina found that 42 percent of workers had carpal tunnel syndrome – that’s astronomically high, and far higher than the industry ever likes to quote.”