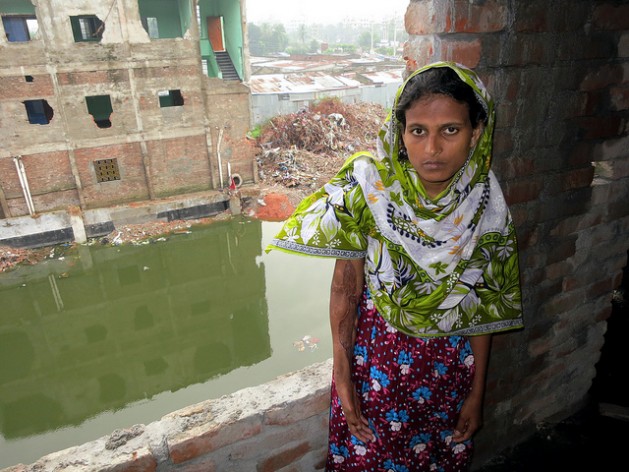 Hasina, one of the 2,438 Rana Plaza workers that came out alive, by the remains of the factory on Sep. 25, 2013. Credit: Robert Stefanicki/IPS

WASHINGTON, Apr 24 2014 (IPS) - A coalition of 134 institutional investors are calling for global corporations to institute new transparency policies throughout their supply chains and to step up assistance to survivors and families still suffering a year after a major fire led to the collapse of a garments factory in Bangladesh, despite repeated warnings from workers.

The investors hail from a dozen countries and collectively manage more than four trillion dollars in assets. They are also pledging to strengthen their own pressure on international brands, urging them to facilitate a permanent strengthening of the voice of subcontracted garments workers in Bangladesh and beyond.

Apparel brands and retailers need to “use the full measure of their influence to respect and protect the human rights of workers throughout their global supply chains, and to provide remedies when those rights have been violated,” the investors stated in an open letter released Thursday, the one-year anniversary of the Rana Plaza factory fire that killed more than 1,130 people.

The collapse, which took place on the outskirts of Dhaka, was one of the worst industrial disasters in modern history. Yet the new letter and related activity are highlighting the potentially potent influence that responsible investors can exert in pushing global brands to adopt policies that could influence labour standards and transparency approaches across the globe.

“Investors have a responsibility to be active owners of the companies that they hold in their portfolios,” David Schilling, senior programme director at the Interfaith Centre on Corporate Responsibility (ICCR), a U.S. coalition that organised Thursday’s letter.

“It’s important for our members and other institutional investors to make sure that we’re using our responsibility to respect human rights as institutions, to encourage not just palliative but systemic changes.”

The Rana Plaza collapse, alongside a string of previous disasters in the country’s garments sector, has focused a unique global spotlight on Bangladesh over the past year. Schilling and others say the result is a nascent model that could have ramifications for worker safety and rights far beyond Bangladeshi borders.

“There aren’t many other places in the world where labour and companies are working to really solve some of these systemic problems, and the approach being used there is being looked at as an emerging model for supply chain accountability elsewhere,” Schilling says. 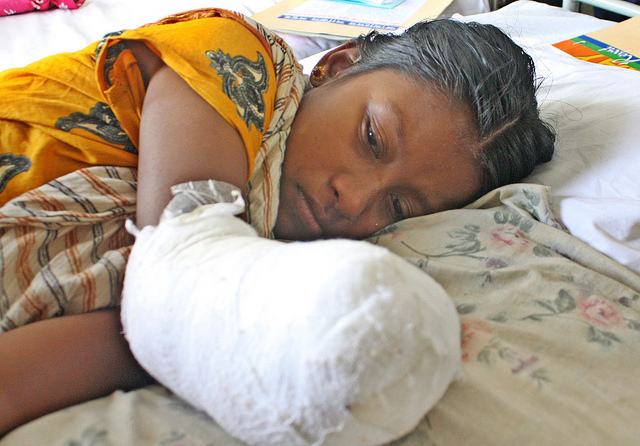 Twenty-five-year-old Razia, pictured here in the hospital on May 4, 2013, survived the collapse, but was permanently maimed. Credit: Naimul Haq/IPS

Bangladesh’s garments sector is among the largest in the world, and constitutes a critical part of the country’s economy and development. Over the past decade, it has attracted many of the most well-known apparel manufacturers, drawn to a particularly low-cost sourcing option.

Given the visibility of these brands, following the Rana Plaza collapse these multinational companies came under intense pressure to collectively institute stricter safety and labour guidelines in their subcontracted factories.

What emerged were two separate initiatives. The first was a fire and safety standards accord that received wide backing in particular from European manufacturers, currently covering around 160 companies and inspecting some 1,600 factories in Bangladesh.

The accord has also received significant support from labour advocates, in particular for being legally binding and for prominently incorporating collaboration by labour unions and civil society. The accord has now begun releasing its first reports, and the government has already closed down 10 factories on those recommendations.

Yet several prominent U.S. and Canadian manufacturers expressed concern over the accord, particularly regarding how legal disputes would be resolved. Around two-dozen North American companies subsequently created a voluntary alliance, responsible for oversight of nearly 700 factories.

Despite their differences, these two initiatives have since started to work towards harmonising their work, facilitated by the United Nations. Yet concerns have arisen over whether the Bangladeshi government has the political will necessary to force through important changes, particularly around institutionalising workers’ voice and further raising the minimum wage.

“Rana Plaza has been a landmark event in the history of corporate responsibility, particularly in the garment sector but also beyond,” Bennett Freeman, senior vice-president for sustainability research and policy at Calvert Investments, a responsible asset management company, told IPS.

“What it tells us is two things: one, that corporate responsibility on its own is insufficient without government responsibility. And two: the factory monitoring and inspection system that has been used for over two decades has really come under fundamental challenge.

Calvert is a founding member of the Interfaith Centre on Corporate Responsibility, and Freeman was one of the signatories of the new letter from institutional investors. He says that additional transparency of supply chains is of critical importance.

In the months after the Rana Plaza disaster, Freeman and his researchers began to look into how many companies disclose the countries where they source their products. He says the results were “astonishingly” low.

So, in July Calvert began to urge companies to engage in greater disclosure. Those that refused have faced shareholder resolutions on the issue.

“Tragic events like Rana Plaza, which may have potential reputational and legal damage, are prompting investors to take an even closer look at where countries are sourcing,” Michael Lombardo, Freeman’s colleague and a senior sustainability analyst at Calvert, told IPS. “Companies must take steps to be more transparent regarding country-level sourcing disclosure.”

A “commitment to transparency at all stages” constitutes a key recommendation in the new ICCR letter. Other such forward-looking structural changes include full remediation once factories are inspected and the creation of new health and safety committees including both workers and management.

Yet the investors and others are also highlighting the still-urgent need for assistance for victims and families of those who were killed in the Rana Plaza collapse.

A 40-million-dollar trust fund for survivors and families has been set up under the auspices of the United Nations, and initial payments went to families earlier this week. Yet as of Wednesday just a third of this money had actually been pledged, according to the International Labour Organisation.

“Donating to the trust fund is not a question of who was in Rana Plaza at what time,” ICCR’s Schilling says.

“This is an equal responsibility for the whole industry. If you are an apparel company who has worked in Bangladesh, the fact is that you have benefited from this system.”