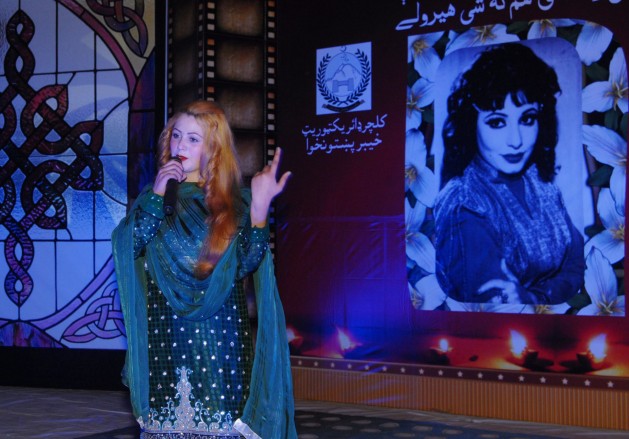 After brief and scattered successes, entertainment has gone back into hiding following bomb attacks by the Taliban. Credit: Ashfaq Yusufzai/IPS.

PESHAWAR, Pakistan, Apr 13 2014 (IPS) - Mushfiq Wali, a 22-year-old shoemaker in northern Pakistan, loves watching films in the local Pashto language. But he says the Taliban are a killjoy: their bomb attacks have led to the closure of movie theatres, again. “They don’t spare anything that brings happiness.”

The extent of freedom to listen to music and to go to the cinema has become a barometer of the influence of the Taliban, and of just normal living. Music and cinema have been emerging as the language of a challenge to the Taliban, as surely as the Taliban have attacked music.

The extent of freedom to listen to music and to go to the cinema has become a barometer for the influence of the Taliban.

“The past five years have been very difficult for musicians because of Taliban militants. Now we are heaving a sigh of relief as acts of terror have gone down,” singer Gul Pana told IPS earlier this year. But the Taliban have hit back.

On Feb. 11, Taliban militants hurled two grenades at Shama Cinema in Peshawar, the capital of Khyber Pakhtunkhwa province in the north of Pakistan, killing 15 people. The attack came soon after five people were killed at the Picture House cinema hall in another terror attack on Feb. 2.

“Such incidents are very depressing for people who seek a few moments of leisure after a hard day’s work,” Wali said. “We have no internet, TV or other entertainment facilities at home, so we would go to cinema halls for some happiness.”

Opposition to movies, music and dance has always been a part of the Taliban agenda. They killed Wazir Khan Afridi, a veteran singer who recorded 50 albums, on Feb. 26. Afridi had been kidnapped three times before, but was freed on those occasions on condition he quit singing.

“The Taliban have set fire to over 500 CD and music shops in Khyber Pakhtunkhwa to frighten people and force them to wind up businesses that are against their brand of Islam,” Ghulam Nabi, who seeks to promote culture in the region, told IPS.

The Taliban have many bases in the Federally Administered Tribal Areas (FATA) in the north bordering Khyber Pakhtunkhwa. They have been targeting music shops and musicians, and believe that music is un-Islamic.

In January 2009, militants had slit the throat of dancer Shabana Begum in Swat, one of the districts of Khyber Pakhtunkhwa, and hung her body from an electricity pole. The incident forced other artistes to stay at home or leave the city. Thousands of dancers and musicians fled Swat from 2007 to 2009 when the area was under Taliban rule.

Peshawar used to have 21 cinema houses, each with a capacity of around 200, before the advent of militancy. The city is now left with just 11 movie theatres. Cinema halls are also being closed down in neighbouring Mardan district.

Jehangir Jani, 54, a well-known Pashto film actor, is perturbed. “It is highly condemnable that the Taliban are depriving people of entertainment. I am sure the insurgents will not be able to shut down cinema houses for very long as people cannot live without movies,” he told IPS.

Jani, who is a household name in Pashtun areas, has had to go to Afghanistan many times to film. “In Afghanistan, films are being produced for CDs. Pashtuns have traditionally been film buffs.”

Films in the Pashto language, widely spoken in Afghanistan, are popular in some Pakistani areas as well. “They are watched by people from FATA as well as Afghanistan,” said cine-goer Zahirzada Khan.

Cinema houses are a cheap source of entertainment, he said. “The closure of cinema halls after back-to-back bombings is very upsetting.”

Kashif Shah, manager of a Peshawar cinema hall, said hall owners received letters earlier this year asking them to stop the “shameful trade” of screening movies. “The Taliban warned that they would make an example of us,” Shah said. His hall is now shut.

Shah said the Taliban’s campaign would end up isolating them. “Even their well-wishers have turned against them.”

But the terror threat persists. Police say they don’t have enough personnel to guard cinema halls, and have directed cinema theatres to make their own security arrangements.

“We have told movie hall owners to install cameras and metal detectors at the gates,” senior superintendent of police Najibullah Khan told IPS. “We don’t have enough personnel, but we are ready to train private security guards to prevent such incidents.”

The police have arrested 15-year-old Hasan Khan, who was paid 80 dollars by the Taliban to hurl grenades at the Shama Cinema.

For the time being, Peshawar is going without films.

Jehanzeb Ali, a 35-year-old mechanic from Mardan, told IPS that he used to watch a film every Sunday. “We used to visit Peshawar, watch films and eat out. Now I haven’t seen a movie for a month.”

The cultural challenge to the Taliban had made tentative but isolated advances in recent years. “In the last few years, I have sung more than a dozen songs against the Taliban,” award-wining singer Khyal Muhammad told IPS in 2011. “I got threatening messages on the mobile phone,” he said. “But I will continue to sing because it gives me strength.”

For some time after 2010 it did appear that music and cinema were on a winning track – despite repeated attacks on musicians and music stores. Cinema houses that were closed down began to reopen.

But all along, those in the business have struggled to keep music playing and the show going. “The endless series of bomb attacks on CD and music shops has become the order of the day, but we are undeterred,” Sher Dil Khan, president of the CD and Music Shops Association in Khyber Pakhtunkhwa in the north of Pakistan, told IPS in 2011. “We will continue to produce new dramas and songs.”

The big encouragement came with the elections in 2013 when cricketer turned politician Imran Khan’s Tehreek-e-Insaaf party won the election in Khyber Pakhtunkhwa. After the resumption of open sales of music, and the occasional theatre performance, music returned in full swing – in many if not all areas. Now, silence has advanced again.