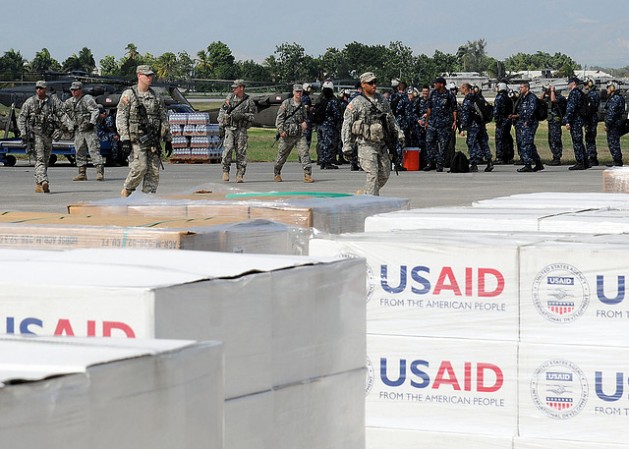 WASHINGTON, Apr 28 2014 (IPS) - Lawmakers here may roll back recent landmark reforms to how the United States provides international food aid, despite warnings that doing so would reduce assistance for some two million people worldwide.

At issue is a longstanding requirement that a portion of that food aid be transported globally on U.S. ships with U.S. crews, a policy aimed at bolstering jobs but which has long been criticised as inefficient in terms of both money and speed of response. For decades 75 percent of aid needed to be moved on U.S.-flagged ships, but in 2012 the U.S. Congress dropped this number to 50 percent, part of a major reform package that humanitarian groups and others lauded.

“They’re trying to argue that you can get the best of both worlds, when the truth is this change will literally cost two million people food on the table at night." -- Eric Munoz

Yet a one-line provision in an otherwise unrelated bill passed by the House of Representatives earlier this month would set this figure again at 75 percent. The Senate is expected to start work in coming weeks on a similar bill, and opposition to the provision is now starting to coalesce among lawmakers, humanitarian groups and the administration of President Barack Obama.

“This absolutely goes against everything Congress and the administration have been trying to do, in terms of being more efficient with government funding,” Ryan Quinn, a senior policy analyst with Bread for the World, an anti-hunger group here, told IPS.

“We’re always talking about the budget crisis and using our money more wisely, but here’s a provision that would specifically raise the cost of food aid by 75 million dollars annually. That money would be taken directly out of U.S. food aid programmes – and millions of vulnerable people would be forced to pay the bill.”

The provision comes in otherwise routine legislation to fund the U.S. Coast Guard. Yet Quinn says the food aid directive, known as Section 318, was slipped into the broader bill with little discussion and no consultations with experts working on international assistance.

Now that the proposal has come to light, however, it has started to receive strong pushback from multiple corners.

“When 842 million people around the world go hungry every day, making every food aid dollar count is both a responsible use of taxpayer money and a moral imperative,” Allan Jury, senior policy advisor at World Food Program USA, a group that supports the U.N. agency and opposes Section 318, told IPS in a statement.

“U.S. food aid saves millions of lives each year. Therefore, we urge Congress to reject any actions that increase transportation costs for food aid and prevent hungry people around the world from receiving U.S. food assistance.”

The Obama administration, which had supported stronger reforms to U.S. food aid than ultimately became law in 2012, has likewise been adamant in its opposition to the new proposal. The Department of Homeland Security has written a letter to the Senate “strongly” opposing Section 318, warning that it would have “grave effects on United States humanitarian assistance programs”.

Rajiv Shah, the head of USAID, the federal agency in charge of most of the country’s foreign assistance, has likewise urged lawmakers to dump Section 318. In the past, the agency has pointed to research finding that previous U.S. food aid policies increased the time required to respond to a humanitarian crisis by up to 14 weeks, compared to simply purchasing supplies locally.

The current debate is particularly important given that the United States is one of the world’s most important contributors of food aid, doling out some two billion dollars in assistance during the past fiscal year. Yet it’s also the only major donor country to continue to mandate transport requirements for that aid.

Lobbyists in favour of Section 318 have not been particularly public about their support, though it is clear the shipping industry and certain labour groups have pushed for the change. In addition, Duncan Hunter, the Republican lawmaker who pushed the provision, has suggested that his primary concern has to do with “military readiness” – ensuring that a sound fleet of private seagoing vessels is available in time of need.

Yet advocates who have urged food aid reform for years say the House’s approval of the bill doesn’t mean lawmakers necessarily support Section 318. Some say the quietness with which action was taken on the provision could have confused some in the House over the impact of the shipping change – a situation they’re hoping to prevent as the issue moves to the Senate.

“I think [lawmakers] are confusing a desire to support U.S.-flagged vessels with a programme that is fundamentally about assistance and reaching people in need,” Eric Munoz, a senior policy advisor with Oxfam America, a humanitarian group, told IPS.

“They’re trying to argue that you can get the best of both worlds, when the truth is this change will literally cost two million people food on the table at night – and at what benefit is not clear. We are now highlighting for members of Congress that this is not just an administrative change but one that will hamper our ability to reach people in places where this assistance is desperately needed.”

Further, the impact of the new change would likely be even more significant than in the past. Previously the federal government specifically tried to offset transport costs by reimbursing USAID and other federal agencies for the higher price of using U.S.-flagged ships.

Yet budget-related wrangling over the past year has ended these reimbursements entirely, amounting to some 731 million dollars over the next decade. This means that higher financial outlays incurred due to U.S. labour costs and regulations will be borne solely by the food programmes – and their intended recipients.

In its recent letter, the Department of Homeland Security warned that the combined effects of the new provision and the reimbursements ending “reduces that number of people – again mostly those in crises – who can be fed annually by 4 million.”

There is no public schedule yet for when the Senate may start work on its own Coast Guard reauthorisation bill, or whether a provision similar to Section 318 would be included. It’s likely, however, that the Senate will take up the issue in June.