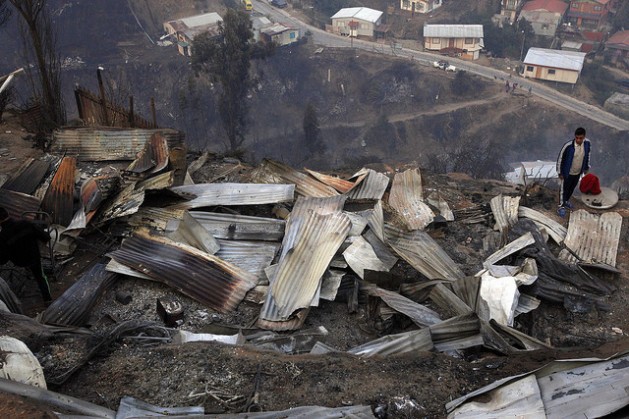 The bleak landscape left behind on La Cruz hill, one of the hardest-hit by the blaze that started on Saturday Apr. 12 in the Chilean city of Valparaíso. Credit: Pablo Unzueta/IPS

VALPARAÍSO, Chile , Apr 15 2014 (IPS) - The blaze that tore through the Chilean port city of Valparaíso revealed the dark side of one of the most important tourist destinations in this South American country, which hides in its hills high levels of poverty and inequality.

The fire that broke out Saturday Apr. 12 and was still smouldering two days later claimed at least 12 lives, completely destroyed 2,000 homes, and forced the evacuation of 10,000 people.

The flames covered at least six of the 42 hills that surround this city of 250,000 people, which is built in the form of a natural amphitheatre facing the Pacific ocean.

Jorge Llanos, 60, lived on the Cerro El Litre, one of the hills lining the city. Early Saturday he set out for his job at the market at Quilpué, near central Valparaíso, where he has a vegetable stand.

“I was coming back home on the bus when I saw the inferno. I got off and from the street I looked up at the hill: ‘My house!’ I shouted. When I got there, it was too late,” he told IPS.

Since the night of the fire, Llanos has been staying at a school that is operating as a shelter.

On Monday, he climbed the hill to look at his house. “There’s nothing there…I lost everything,” he said, sobbing.

Valparaíso, 140 km northwest of Santiago, is built on a bay surrounded by hills and mountains where most of the city’s inhabitants are concentrated. It is this South American country’s second-largest port.

The hills, which start to rise just one kilometre from the coast, are densely populated with brightly coloured wooden houses. In 2003, the United Nations Educational, Scientific and Cultural Organisation (UNESCO) declared the city a World Heritage Site.

Valparaíso is also a cultural centre in Chile. Nobel Literature laureate Pablo Neruda (1904-1973) built one of his three houses there, and it is the site of the National Council of Culture and the Arts.

It has also been the seat of Congress since the return to democracy after the 1973-1990 dictatorship, when the old legislature in Santiago was replaced by the new building in Valparaíso, to decentralise the branches of government.

But 22 percent of the city’s population lives below the poverty line, compared to a national average of 14 percent.

Valparaíso is also one of the areas in Chile with the largest number of families living in slums.

According to the Fundación Un Techo Para Chile (A Roof for Chile Foundation), Valparaíso is the city with the most slums in Chile, and the region of Valparaíso is home to one-third of all families living in shantytowns.

“The enormous blaze that has affected this city has brought to light the terrible vulnerability of the families living in slums, who were hit the hardest,” the director of Un Techo Para Chile – Valparaíso, Alejandro Muñoz, told IPS.

The fire, which spread from forested areas at the top of the hills down into poor neighbourhoods of mainly wooden houses, “completely destroyed four slums,” he said.

This was the worst fire ever in a Chilean city in terms of the area affected – some 900 hectares – but not with respect to the number of victims.

Muñoz pointed out that Valparaíso is a World Heritage Site, and Viña del Mar, a nearby coastal resort, is known as the “garden city”. But “a harsh and sometimes difficult to understand reality hides behind the hills of both cities – that of slum-dwelling families,” he said.

Lorena Carraja and her 80-year-old parents have been staying since Saturday at an improvised shelter set up on a tennis court. In the cold, bleak camp, she described the moment when the flames reached her home.

“It was a veritable inferno; we were completely surrounded by fire which in one second spread from one side to the other, with strong winds that carried the flames from hill to hill. It was horrible, terrifying, I had never seen anything so huge in my whole life, I wouldn’t wish it on anyone,” she told IPS.

But in the end, Carraja, 50, didn’t lose her home, although she did lose many of her belongings. “It doesn’t matter, everything can be replaced; thank God we’re alive,” she said.

Then she sighed and described, with a catch in her voice, how she heard “people screaming, children crying, while people were fainting.”

Cities in Chile were built with little urban planning, experts say. And families seeking a chance at a better life have flocked to the outer edges of large cities like Valparaíso.

But “the central and local governments have not taken an interest in the arrival of marginal populations to the cities, and there hasn’t been systematic concern in this country for the people who come to the cities,” Leonardo Piña, an anthropologist at the Alberto Hurtado University, told IPS.

“Valparaíso is no exception,” he said.

Piña added that the houses on the hills around the city “were built one on top of the other, and while it is exotic and seen as extraordinarily beautiful, to the point that it was named a World Heritage Site, that hasn’t meant that the concern has gone any farther than just giving it that label.

“The disaster has shown how bad the neglect is,” the anthropologist said.

The UNESCO declaration drew heavy flows of investment to Valparaíso from the Inter-American Development Bank, and the implementation of an ambitious Programme for Urban Recovery and Development generated high expectations among the people in this port city.

However, the 73 million dollars invested in the programme between 2006 and 2012 failed to make a dent in the poverty and marginalisation.

Piña said the main thing missing were policies that would effectively bring basic services to the poor, in order to make it possible for them to have a decent standard of living.

Experts agree that what is needed now is relief for the victims of the tragedy.

But later what will be required is political will to reduce the poverty in the “crazy port,” as Neruda referred to the city in his poem “Ode to Valparaíso”, written in the watchtower of La Sebastiana, his house built like a ship. The city, he wrote, would soon forget its tears, to “return to building up your houses, painting your doors green, your windows yellow.”