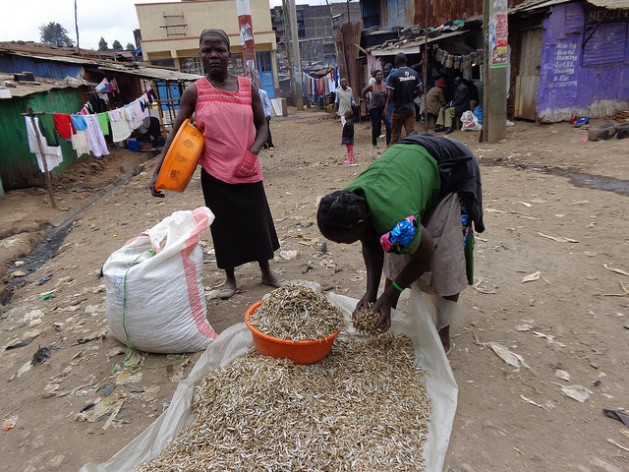 Residents of Nairobi's Mathare slum, one of the largest in Kenya. Credit: Miriam Gathigah/IPS

Yet as the two Washington-based institutions gather here this week for semi-annual meetings, anti-poverty campaigners are calling on the bank and IMF to translate such rhetoric into practice.

“Fewer than 100 people control as much of the world’s wealth as the poorest 3.5 billion combined.” -- World Bank President Jim Yong Kim

“World Bank President Jim Kim and IMF Managing Director Christine Lagarde have been vocal about the dangers of skyrocketing inequality, but there is still a long way to go,” Max Lawson, the head of policy and advocacy for Oxfam GB, a humanitarian and advocacy group, told IPS.

“There’s no trade-off between growth and inequality,” concurred his colleague, Nicolas Mombrial, of Oxfam America. “There will be no inclusive growth if economic inequality remains out of control.”

Oxfam and other groups are now calling on the World Bank and IMF to take concrete action to address issues associated with wealth inequality worldwide. IMF policies in particular have been criticised in the past for particularly negative impacts on poor and marginalised communities.

“We are pleased to see the IMF recognise that drastic fiscal consolidation policies have been a drag on growth, something that unions have been saying since the inappropriate shift to austerity made in 2010,” Sharan Burrow, general secretary of the International Trade Union Confederation (ITUC), said Thursday.

“The IMF’s undermining of labour standards and collective bargaining institutions in several European countries, for example, has already had important impacts on income distribution that are likely to intensify in the future. We urgently call for a review and major changes in the Fund’s labour market policies.”

Oxfam’s Lawson lists at least three areas that he would like to see receive serious consideration by the IMF and the World Bank.

“First of all, it is necessary to develop a more adequate measurement of income inequality,” he says. “This needs to look at not only the income of the bottom 40 percent of the world’s income earners are measured but also the income flows of the world’s top 10 percent.”

Lawson suggested that the IMF, given its constant and influential interaction with the world’s governments, would be particularly well placed to advance a stronger measurement of inequality.

“Secondly, it is necessary to reform taxation schemes,” Lawson continued. “It is not fair that a billionaire pays a lower percentage in tax than a bus driver. And thirdly, it is essential to provide access to universal health care and education.”

Oxfam is also calling on governments to address inequality by focusing more robustly on tax dodging and related financial secrecy. Along with others, the group is calling for a global goal to end extreme inequality as part of the discussion around the post-2015 international development goals.

“We cannot hope to win the fight against poverty without tackling inequality,” Oxfam says. “Widening inequality is creating a vicious circle where wealth and power are increasingly concentrated in the hands of a few, leaving the rest of us to fight over crumbs from the top table.”

Inequality has become a particularly prominent topic in international policy discussions over the past two years. In part this is because, in the aftermath of the global economic downturn of 2008, the rich have bounced back much more quickly than the poor – thus widening the inequality gap.

A recent list of global billionaires published by Forbes underscored the scope of the problem. According to that data, just 67 people have as much wealth as the poorest 3.5 billion people.

“Fewer than 100 people control as much of the world’s wealth as the poorest 3.5 billion combined,” World Bank Group President Jim Yong Kim said Thursday at the start of the World Bank-IMF Spring Meetings. At similar meetings last year, Kim announced a new bank goal of eliminating extreme poverty by 2030.

Yet on Thursday he warned that economic growth is not enough to reach that goal.

“Even if all countries grow at the same rates as over the past 20 years, and if the income distribution remains unchanged, world poverty will only fall by 10 percent by 2030, from 17.7 percent in 2010,” he said.

“We need a laser-like focus on making growth more inclusive and targeting more programmes to assist the poor directly if we’re going to end extreme poverty.”

Kim’s warning is underscored in a press release published on Thursday by the bank.

“Rising inequality of income can dampen the impact of growth on poverty,” the paper says.

“In countries where inequality was falling, the decline in poverty for a given growth rate was greater. Even if there is no change in inequality, the ‘poverty-reducing power’ of economic growth is less in coun­tries that are initially more unequal.”

The paper emphasises that the governments and donors can’t aim only to lift people out of extreme poverty, but also have to ensure that people aren’t “stuck just above the extreme poverty line due to a lack of opportunities that might impede progress toward better livelihoods.”

“Persistent inequality, where the rich are continuously advantaged and the rest struggle to catch up, makes people frustrated with the system,” Carol Graham, a scholar at the Brookings Institution, a Washington think tank, told IPS.

“Such inequality pre-programmes the public perception downward. And even in countries where there is a progress with regard to inequality, and social frustration impacts political instability.”

In a blog post, Carol Graham and another researcher tie recent protests in Chile, Brazil, Russia, Turkey, Venezuela, Ukraine and even the Arab Spring to widening income differential or inequality.

“The protesters are not a nothing-to-lose risk taker, but middle-aged, middle income, and more educated than average people who are unhappy about an unfair advantage of the rich and a lack of opportunities for the poor,” they write, calling the “prototypical” protestors “frustrated achievers”.

“Extreme inequality is particularly dangerous in countries in political and economic transition,” they note.