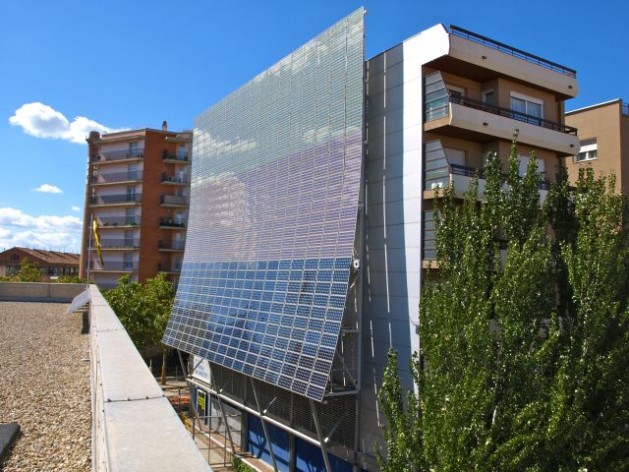 Solar panels on one of the buildings of the Museum of Science and Technology of Catalonia. Credit: Chixoy CC BY-SA 3.0

MÁLAGA, Spain , May 6 2014 (IPS) - Until recently it was inconceivable for small groups of organised citizens in fully electrified industrialised countries like Spain to generate their own power from clean sources of energy, challenging the prevailing energy model.

But now anyone who wants to become an “agent of change” can be a co-owner of community projects that promote renewable energy, such as the Huerta Solar Amigos de la Tierra, a 20-kW solar energy plant in the municipality of Sisante in southeast Spain.

Friends of the Earth Spain and the non-profit company Ecooo are behind the creation of the plant.

“We have to change the 20th century paradigm, where energy equals fossil fuels, and citizens are seen as mere consumers,” Héctor de Prado, head of energy and climate in Friends of the Earth Spain, told Tierramérica.

“The most ecological and economical kilowatt is the one that isn’t consumed.” -- Ecooo spokesman José Vicente Barcia

Ecooo, which forms part of the Platform for a new energy model, made up of over 300 organisations, also installs and maintains solar panels for private individuals and carries out energy audits to analyse consumption.

“Installed capacity is higher than what is needed, to the profit of the energy corporations,” said Barcia. “What is needed is a culture of energy savings, because the most ecological and economical kilowatt is the one that isn’t consumed.”

Another possibility for energy consumers who want to support clean energy collectives is to switch from a traditional power utility to one of several “green” cooperatives operating in Spain, such as Zencer in the southern region of Andalusía, Som Energia in Catalonia in the east, or GoiEner and Nosa Enerxia in Galicia in the northwest.

“We want to make consumers participants in managing the energy they consume,” architect Francisco Javier Porras, founder and president of Zencer, told Tierramérica.

Zencer has been supplying electricity generated by renewable sources at a national level since January 2013.

The cooperatives can purchase electricity from the traditional utilities, but they guarantee that all of the energy they sell comes from clean sources, by granting renewable energy certificates to producers of clean energy.

According to Porras, between 30 and 40 percent of the energy produced in Spain now comes from renewable sources.

In his office in Fuengirola in the southern region of Málaga, Porras said consumers “are reluctant to accept changes in terms of energy supply” even though their electricity bills have soared in recent years.

The cost of electricity for the members of the cooperatives is no higher than what consumers pay for power from the big corporations like Iberdrola, Gas Natural Fenosa, Endesa, HC and E.On, and it can even be lower, while users have the satisfaction of knowing they are helping to support clean energy, say advocates of the cooperatives.

In this southern European country, where unemployment stands at 25 percent and the cost of electricity continues to climb, there is a new phenomenon: energy poverty.

The number of people who are finding it hard to pay their electricity bills grew by two million from 2010 to 2012 in this country of more than 47 million people, according to a report by the Association of Environmental Sciences (ACA).

The study found that the proportion of households affected by energy poverty has risen to more than 10 percent – or more than four million people.

José Luis López, who led the study, believes that collective energy management initiatives can have “a certain influence” on reducing energy poverty when they are able to bring down the costs of the members’ energy bills, although he said “there is no immediate short-term effect.”

Promoting renewable, independent energy production also reduces dependence on fossil fuels, thus bringing about a reduction in the millions of euros in fixed costs for the state coffers, López added.

Friends of the Earth Spain complains that the government is standing in the way of the progress of renewable energy in this country, whose enormous potential is not being harnessed, it says, while other European Union countries see green energy as a way to combat emissions of greenhouse gases.

“The government has some nerve to do what it is doing,” said Marc Roselló of Som Energia, referring to the government’s energy policies, which privilege large corporations that use fossil fuels.

In July, the centre-right government introduced an energy reform, and in December it approved an amendment to the electricity sector law, which was opposed by the hundreds of members of the Platform and 14 opposition parties.

Roselló told Tierramérica that in late 2010, a year after the energy market was liberalised, Som Energia transferred to Spain the solid experience of companies like Ecopower in Belgium or Enercoop in France.

“We don’t only sell energy; we also produce energy through our own projects,” he said. The cooperative’s bills provide the more than 14,000 members with details on the origin of the electricity it distributes. In 2013, for example, the energy distributed by the cooperative came from solar, wind and biogas plants.

Zencer’s Porras also sees “the big objective” for the 600-member cooperative, which is accredited to distribute energy throughout Spain, as producing energy through small-scale electricity generation projects using its own funds.

Although a few years ago social participation in the energy system was not possible, thousands of people from all walks of life – investors concerned about the environment, ecologists and others – are now taking part or investing in clean energy projects, like Viure de l’aire, a community wind energy project in Catalonia.

“Each green kWh that you add to the energy grid is one kWh less from burnt fossil fuels,” said Héctor de Prado.