WASHINGTON , May 20 2014 (IPS) - Delegates to this week’s annual meeting of the World Health Assembly (WHA) in Geneva should agree on an ambitious agenda to sharply cut the rate of newborn deaths and stillbirths over the next two decades, according to maternal and infant health experts.

Reducing the rates of newborn deaths and stillbirths has lagged significantly behind the remarkable progress achieved in cutting mortality among children between the ages of one month and five years, according to a new study in the “Every Newborn” Series published by the British medical publication, ‘The Lancet”.

Thanks in major part to the U.N.’s Millennium Development Goals (MDGs), reductions in mortality for children 1-59 months and maternal mortality have averaged 3.4 percent and 2.6 percent annually, respectively, in recent years. By contrast, the neo-natal mortality and stillbirth rates fell by only two percent and around one percent per year, respectively. 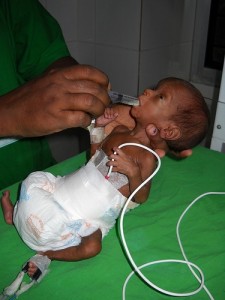 That lag has been caused above all by “disappointing levels of investment in newborn health,” according to the study, which drew on the work of more than 55 experts from 29 institutions in 18 countries.

“So far, investment targeted to newborn health has been miniscule,” noted Joy Lawn of the London School of Hygiene & Tropical Medicine, who led the research on which the study is based along with Zulfiqar Bhutta from the Hospital for Sick Children in Canada and the Aga Khan University in Pakistan.

“Nearly half (44 percent) of all deaths in children under five are in the first month of life, yet only four percent of donor funding to child health even mentions the word newborn,” Lawn told IPS.

Indeed, every year, some 2.9 million infants die within 28 days of their birth, and another 2.6 million die in the last three months of pregnancy or during childbirth, according to U.N. estimates. Nearly half of these deaths occur during labour.

Many of those stillbirths have remained invisible, however, on the global health agenda, because nearly all of them go unreported to health authorities, and data collection on both stillbirths and neo-natal deaths is in any case inadequate. This is particularly true in the most-affected countries which include India, Pakistan, Afghanistan and Bangladesh, as well as Nigeria and a number of other sub-Saharan countries, according to the study. More than 75 percent of newborn deaths occur in South Asia and sub-Saharan Africa.

This week’s meeting of the WHA, the governing body of the World Health Organisation (WHO), will take up the “Every Newborn Action Plan” (ENAP) aimed at encouraging donors and beneficiary countries to accelerate action aimed at addressing the problem.

“The plan is based on a series of measures that are already proving effective in keeping women and children healthy – from preconception and pregnancy through to childhood and adolescence,” according to Dr. Elizabeth Mason, irector of WHO’s Department for Maternal, Newborn, Child and Adolescent Health. “Our goal is to end preventable newborn deaths within a generation.”

Specifically, the plan envisages reducing national neo-natal mortality to fewer than ten deaths per 1,000 live births and stillbirth rates to fewer than ten per 1,000 by 2035, resulting in global averages of seven and eight, respectively, according to the report.

If successful, that would cut current rates of neo-natal mortality and stillbirths by more than half and by as much as 85 percent in the worst-affected nations.

The study identifies proven interventions, including the promotion of breastfeeding; neo-natal resuscitation; so-called kangaroo mother care, which involves holding pre-term infants close to the mother’s skin for warmth and regulating their heartbeat; and providing corticosteroids that prevent infection resulting from cutting the umbilical cord.

The implementation of these interventions by themselves “could get newborn deaths down substantially in the first couple of years,” Melinda Gates, co-chair of the Bill and Melinda Gates Foundation, the world’s largest private source of funding for global health initiatives, told the ‘Wall Street Journal’ in an interview published Monday.

She is scheduled to address the WHA in support of ENAP Tuesday. Along with the U.N. Children’s Fund (UNICEF), WHO, and various bilateral agencies, the Gates Foundation is expected to be a major source of funding for the plan.

Lawn stressed the importance of having trained personnel available during and immediately after birth. “A critical issue is the need for more midwives and nurses with skills to look after women in labour and small and sick newborns,” she told IPS in an email. Each year, one million babies die on the day of their birth, according to the report.

Indeed, the most common barriers to improving survival rates were related to the dearth of trained health workers, according to studies of eight of the worst-affected countries – Afghanistan, Bangladesh, Democratic Republic of Congo, India, Kenya, Nigeria, Pakistan, and Uganda.

The study found that those countries that have achieved the most rapid reductions in maternal and newborn mortality – such as Malawi, Nepal, and Peru – have done so in major part by expanding their health workforce, improving care for small and sick newborns, and implementing new programmes designed to reach the poorest families.

Along with trained personnel, the availability of healthcare facilities is also critical.

“The increasing number of women who are giving birth at healthcare facilities presents the most immediate opportunity for action,” according to Bhutta.

“Our analysis shows that by increasing facility births and closing the quality gap at healthcare facilities by 2020, we could prevent an estimated 113,000 maternal deaths, 531,000 stillbirths, and 1,325 million newborn deaths each year. This should clearly be an immediate priority,” she added.

Lily Kak, the senior advisor for Global Partnerships and Newborn Health at the U.S. Agency for International Development (USAID), praised ENAP, calling its introduction a “historic moment and opportunity” and noting that it is “the first plan to unite the global community around progress toward newborn health outcomes.”

“Although we have seen incredible success in bringing down under-5 deaths, neo-natal mortality rates have declined at a slower pace,” she told IPS in an email. “This is in part because newborn health was not a global priority, investments were minimal, and simple and cost-effective ways of tackling the leading causes of newborn mortality—prematurity, asphyxia and sepsis— are better understood now.”