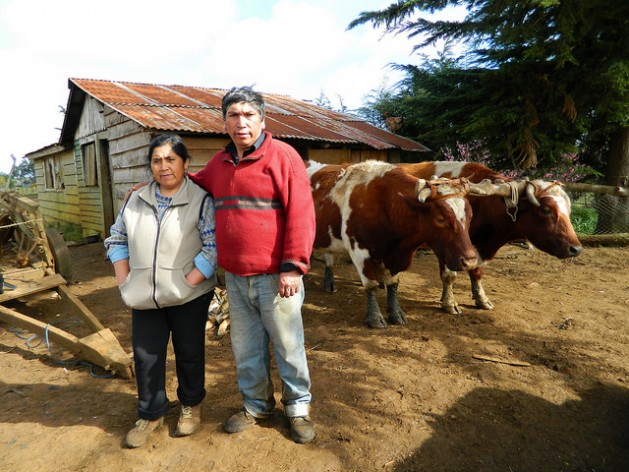 Catalina Marileo and Luis Aillapán, a Mapuche husband and wife in front of their home in Puerto Saavedra, in the central Chilean region of La Araucanía. In 2002 they and other relatives protested against military personnel preparing to build a highway on their land. They were prosecuted and tried under the anti-terrorism law and ultimately acquitted. Credit: Marianela Jarroud/IPS

SANTIAGO, Jun 24 2014 (IPS) - Chile has made a commitment to the international community to improve human rights in the country and erase the lingering shadow of the dictatorship on civil liberties.Making progress on women’s sexual and reproductive rights, reforming the controversial anti-terrorism law, guaranteeing the human rights of indigenous peoples and universal access to education and health are among the promises Chile made to the United Nations in June.

“We see that Chile is constantly taking steps toward the fulfilment of its obligations,” Amerigo Incalcaterra, the regional representative for South America of the U.N. High Commissioner for Human Rights, told IPS.

On Jun. 19 the country underwent its Universal Periodic Review, a mechanism overseen by the U.N. Human Rights Council, for the second time in 2014.

At its appearance before the Council in Geneva, Switzerland, the Chilean government formally accepted 180 of the 185 recommendations made by the 84 member states, and turned down five.

Chile is one of the most conservative countries in Latin America, and is one of just six nations in the world where abortion is banned under any circumstances. Divorce was only approved in 2004, and the lesbian, gay, bisexual, transgender and intersex (LGBTI) community is still fighting for legal recognition of same-sex couples.

Education and health are deeply stratified, generating a spiral of inequality that this country of over 17 million people is clamouring to see reversed.

Native peoples like the Mapuche lack constitutional recognition in Chile and have engaged in confrontation with the authorities and powers-that-be for decades, seeking restitution of ancestral lands that were taken from them.

The Human Rights Council’s recommendations were addressed earlier this year by the rightwing government of President Sebastián Piñera (2010-2014), only weeks before he left office in March.

Piñera accepted 142 recommendations, rejected 13 and “took note of” another 30, which he said he could not commit to fulfilling because they depended on securing congressional approval.

“‘Taking note of’ these recommendations was a new departure in international law because recommendations must be accepted or rejected,” Paula Salvo, principal lawyer for the National Human Rights Institute (INDH) which took part in the session in Geneva, told IPS.

On May 30, the government of socialist President Michelle Bachelet sent a written “correction” to the earlier report, in which she accepted 180 recommendations and rejected five.

Among the five not accepted were two from the Vatican, on the rights of the human person from conception and the protection of traditional family identity, and another on Bolivia’s right to an outlet to the Pacific ocean.

According to Incalcaterra, Bachelet viewed many of the recommendations rejected by her predecessor as a part of her government programme, including the decriminalisation of therapeutic abortions in the case of foetal inviability, danger to the life of the mother and rape.

A bill to allow termination of pregnancy in these cases will be debated in parliament in the second half of this year.

Incalcaterra, whose regional headquarters are in Santiago, said that the U.N. recognises that abortion is “a complex, health-related issue”, while the Human Rights Council asks states to legislate for “at least these three cases” of abortion.

As well as legalising therapeutic abortions, the government promised to reform other laws inherited from the 1973-1990 Augusto Pinochet dictatorship, like the anti-terrorism law, which is enforced virtually exclusively against alleged offences by Mapuche indigenous people in their struggle to reclaim their traditional lands.

This law imposes high penalties, dual trials by civilian and military courts and “faceless” witnesses, among other anomalies. The government promised not to use the law against Mapuche people and to respect their human rights.

Hernando Silva, a researcher for Observatorio Ciudadano (Citizen Observatory), told IPS that his organisation is pleased that the state has accepted these recommendations, and is hoping that “they are implemented once and for all, and not just recognised.”

“It is not the first time that Chile commits itself to legislate about military courts or the anti-terrorism law” without anything happening to bring it about, he said.

“Bachelet herself  promised to stop enforcing the anti-terrorism law against the Mapuche people during her first term (2006-2010), but did not deliver,” he added.

Silva stressed that “this time, she needs to fully live up to her human rights obligations.”

Incalcaterra said that there is no legal compulsion to fulfil the Human Rights Council’s recommendations, but he pointed out that “all work done at the international level is based on good faith.”

“When you undergo this exercise, in dialogue with other states, and you agree to recognise the recommendations as appropriate, obviously you have to go back in four years’ time and report on what you have done,” he said.

The goal of the Universal Periodic Review, he said, is to promote the human rights of all people living in a country.

“We should see it as additional support to help states to establish public policies, improve their legislation where necessary, create institutions if they are lacking, devote resources, collect statistics and analyse them, organise campaigns, etcetera,” he said.

Chile’s fulfilment of its commitments will be reviewed in four years’ time.

The INDH has a role as the state supervisory institution and in its view there are urgent needs, such as the ratification of certain international human rights treaties.

For the many victims of the dictatorship who have not received reparations, the INDH believes a permanent assessment agency should be established for pending cases, and legal and social advice should be made available to torture victims.

INDH lawyer Salvo told IPS that “the government must create a permanent review mechanism for the U.N. recommendations,” because from now on “the challenge is internal.”