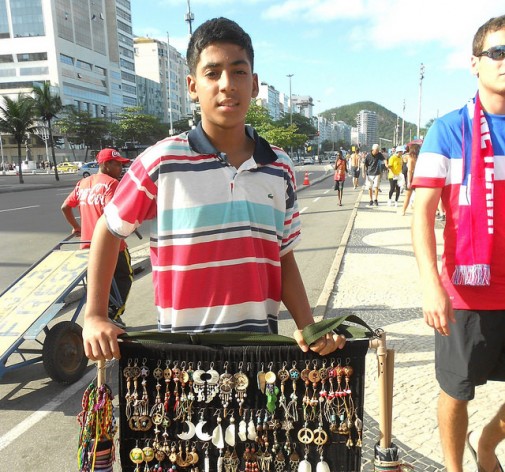 Julio T is a 15-year-old vendor of handcrafted costume jewellery in Copacabana in Rio de Janeiro, near the FIFA Fan Fest. He says sales are good during the World Cup because there are a lot of tourists. Credit: Fabíola Ortiz/IPS

RIO DE JANEIRO, Jun 24 2014 (IPS) - The FIFA World Cup being played in Brazil has sounded a warning for organisations fighting exploitation of children and adolescents, during an event that has attracted 3.7 million tourists to the 12 host cities.

As well as revenue, business and employment opportunities, the football World Cup also increases the risks of labour and sexual exploitation of children under 16, according to social organisations and the United Nations Children’s Fund (UNICEF).

“We do not have statistics to quantify the problem, but factors surrounding the World Cup create more vulnerability to exploitation” among children and adolescents, Flora Werneck, the coordinator of Childhood Brasil, told IPS.

The wave of tourists between Jun. 12 and Jul. 13 in the cities where FIFA (International Association Football Federation) World Cup matches are being played has multiplied temporary demand for services and increased child labour and the vulnerability of children’s rights, Werneck said.

Childhood Brasil has been combating sexual abuse in this Latin American country for the past 15 years.

In Werneck’s view, the fast pace of construction and infrastructure projects for the World Cup created dramatic growth in temporary jobs, migrant workers and family evictions, and the school holidays are now another risk factor.

Children and teenagers may be coerced into illegal activities like selling drugs and child prostitution. “They are more exposed to these and other risks,” Werneck said.

Violations of children’s rights are exacerbated by social factors that increase vulnerability, such as inequality, poverty, lack of access to education, consumerism and the culture of machismo, said Werneck and other experts consulted by IPS.

The sexual exploitation of children related to major sporting events is a problem that has been silenced and neglected by public policies.

A 2013 study carried out by Brunel University, in London, commissioned by Childhood Brasil in association with the Oak Foundation , pointed to factors determining increased numbers of cases of violence against children, due to the existence of “significant risks” to children around major sporting events.

In addition to this year’s World Cup, Rio de Janeiro will host the 2016 Summer Olympic Games.

The lack of data measuring the magnitude of the risks does not mean these do not exist, the study says. “We should not assume that no data = no problem,” it states.

The experts consulted say that there is a profound lack of data related to child exploitation in Brazil. The figures that exist are from the Human Rights Secretariat of the Presidency’s rights abuse hotline “Disque Denúncia Nacional” (Dial 100).

In 2013 the hotline received more than 120,000 denunciations of violations of children’s rights.

“No child should suffer because a football stadium is built, nor should they be victims of exploitation through sex tourism. There are no firm data that can prove that mega events are related to a rise in child abuse,” Alessandro Pinto, the coordinator in Brazil of the Save the Dream campaign, told IPS.

But, he said, “we are here to watch this phenomenon closely in Brazil for the next two years.”

Save the Dream is a joint initiative of the International Centre for Sport Security (ICSS) and the Qatar Olympic Committee.  Pinto said that the campaign will attempt to gather concrete data about the link between mega sporting events and violence against children until the 2016 Olympics.

On Jun. 20 Pinto took part in an event to publicise the preliminary results of the Proteja Brasil (Protect Brazil) campaign against sexual exploitation of children, under the auspices of UNICEF and the Brazilian government in the framework of the World Cup.

One of the strategies to encourage reporting acts of violence against children was the creation of an application that can be downloaded free to smartphones and tablets. The Protect Brazil app is an unprecedented initiative worldwide, said Ideli Salvatti, the minister of the Human Rights Secretariat.

The app aims to make use of the more than 70 million cell phones in Brazil, a country of over 200 million people, to spread reporting of child abuse. It is available in Portuguese, English and Spanish.

Casimira Benge, chief of UNICEF’s child protection programme in Brazil, said that as Brazil is a country of mega events, violence against its 56 million children and adolescents is also on a large scale.

“We learned a lot from the World Cup in South Africa in 2010. Children had no classes because the schools closed during the championship, and so they were left unsupervised. Here in Brazil we are working to provide accompaniment and support for children, even during the school holidays,” Benge told IPS.

Since the launch of the online app on May 18 until Jun. 20, it has been downloaded 60,000 times and 3,800 telephone calls were made to child protection agencies. According to UNICEF, in just one month the campaign reached 40 million people.

Analysis of reports to the Dial 100 hotline found that nearly 50 percent of victims were female, 60 percent were Afro-Brazilian, and victims of violence were mainly aged 8-14, with 65 percent of the aggressors belonging to their immediate family.

Sexual violence ranked in fourth place among the Dial 100 complaints in 2013, at 26 percent. In 2012, when there were over 130,000 reports, one-third of them were related to sexual violence.

In Benge’s view, the best strategy against violence is prevention and enabling reporting of incidents.

Sexual violence is classified in two categories, she said: domestic abuse of a minor, like statutory rape, and sexual exploitation for profit, like prostitution. In 2013 there were 28,552 reports of abuse and 10,664 of sexual exploitation.

Benge said cities in the north and northeast of Brazil, like Manaus and Ceará, deserve special attention because they are more vulnerable.

“There must be vigilance in all 12 host cities, but greater attention must be paid to those with a higher incidence,” she said.

Since the FIFA World Cup began there have been no reports of arrests in the host cities for offences of this nature, but two weeks beforehand the police closed two venues in Rio de Janeiro, allegedly for child sex exploitation.