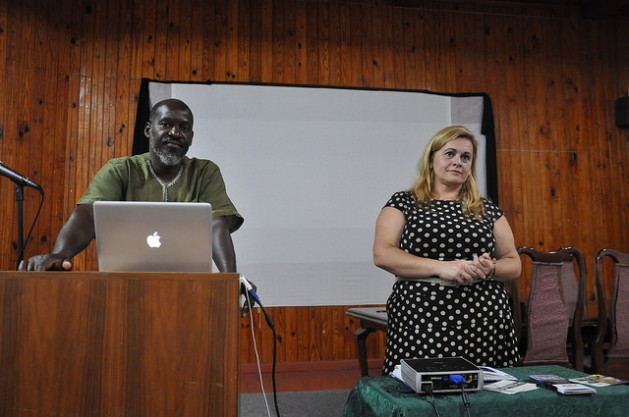 CODRINGTON, Barbuda, Jun 30 2014 (IPS) - The 1,800 residents of the tiny Caribbean island of Barbuda are learning to adapt as climate change proves to be a force to reckon with, disrupting not just the lives of the living but also the resting places of those who died centuries ago.

United States-based archaeologist Dr. Sophia Perdikaris said when Hurricane Georges hit in 1998, it did a lot more than turn the spotlight on the island’s shrinking coastline.

"One of the sure things that will happen as a result of climate change is that one-third wetlands will engulf the one-third lowland...so that will leave us with 21 square miles of usable land." -- John Mussington

“In the early years when I first started coming to Barbuda, it was because hurricane activity had exposed a lot of archaeology and it was an effort to do rescue. A human skeleton from 450 AD was exposed in the area called Seaview,” Perdikaris told IPS.

“In fact, some of the archaeology [including the human skeleton] that we are now housing in the newly formed museum was excavated by Hurricane Georges.”

Perdikaris, a professor of anthropology and archaeology at the City University of New York, Brooklyn College, said some of the findings coming out of Barbuda point to climatic shifts in weather conditions at the same time that the northern part of Europe was experiencing the little Ice Age.

“Similar signatures are coming out of Barbuda that actually have the same stories in Greenland, Iceland and the North Coast of Africa,” she said. “Hence, Barbuda is not just a small island in the Caribbean but actually a major part of bigger weather events in the circum Atlantic.”

Perdikaris said one of the things that Barbudans are faced with today is “a big word, climate change – what does it really mean and how is it affecting people’s lives and what can they do to change it?”

But she noted that the residents are very adaptive.

“We do find solutions with the help of the amazing expertise of the local people because they are the best experts for their local environment,” she said.

“We are trying to gather enough information to see what our challenges are and how we move forward; and then find the funding resources and technology to make that happen.

“We are monitoring erosion in many parts of the island and we also have been testing the wells to see whether the water is safe to drink or whether the salinity has been changing; all of these efforts in order to assess the three aquifers that are under Barbuda,” she added.

Another project being developed on the island is aquaponics, the combination of aquaculture and hydroponics (growing plants without soil), amid a growing realisation that climate change will likely seriously threaten food security in Barbuda.

“There are diminishing resources in the sea. It is problematic to grow crops if you have a drought or if you only have salty water to water them so we have developed an aquaponics facility,” said Perdikaris.

Dr. Perdikaris said climate change has forced the residents of the island with a single village to make changes to their way of life and also to put measures in place to secure their future.

“As glaciers melt because of high temperatures what it’s doing to the rest of us is actually increase the sea level, and by increasing the sea level a number of things are taking place,” she said. “With a low-lying island like Barbuda, one of our main concerns is how much of the island, how fast, will actually be under water.

“As the sea waters are rising, they are not only claiming land but they are actually claiming the coral reefs,” Perdikaris added.

Marine biologist and environmentalist John Mussington said the warning by scientists that the 62-square-mile [161-square-kilometre] island is becoming one of the most vulnerable spots due to the consequences of climate change is not being taken lightly.

“Barbuda is flat; the highest point is just over 100 feet. Now with climate change predictions they are talking about several metres in terms of sea level rise. When you look at the present topography of Barbuda, it is 62 square miles. A third of Barbuda is taken up by lagoons and wetland systems.

“Another third is what we call the lowlands. One of the sure things that will happen as a result of climate change is that one-third wetlands will engulf the one-third lowland to become two-thirds wetlands,” Mussington told IPS.

“So that will leave us with 21 square miles of usable land for sustaining communities. That is the reality we are facing.”

Barbuda’s culture is firmly based in a “living off the land concept” that Mussington said is fast becoming a thing of the past with the advent of climate change.

“We want to sustain the fact that Barbuda has a tradition of its people living off the land and one of the things we are going to face in terms of challenges from climate change is we are not going to be able to do that,” he said.

“If we are going to survive we have to overcome those challenges, hence the direction we are taking in terms of being able to continue to feed ourselves protein wise and vegetable wise.”

The entire population is being educated in aquaponics technology, a method of growing crops and fish together in a re-circulating system.

“We had a dream in 2012 of actually helping the situation in Barbuda by being able to guarantee that we can continue to get our protein source in the form of fish as well as to produce vegetables in spite of what was going to happen and what is happening from climate change,” Mussington said.

“In the aquaponics technology that we are pioneering we now house in our tanks 4500 tilapia.

“We have to find solutions in order to continue living on the island. That is why aquaponics turned out to be one of those things that we are pushing because the end result of the climate change consequences is that our coral reefs are going to suffer, our beaches are going to be shifting and changing,” Mussington added.