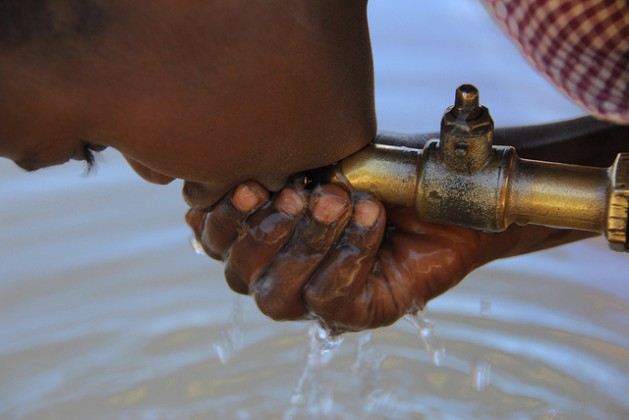 UNITED NATIONS, Jun 19 2014 (IPS) - When the United Nations reaches out to resolve a water or sanitation crisis, it is largely across urban slums and remote villages in Asia, Africa or Latin America and the Caribbean.

But a severe water crisis in the financially bankrupt city of Detroit in the U.S. state of Michigan has prompted several non-governmental organisations and activists to appeal for U.N. intervention in one of the world’s richest countries.

“This is unprecedented,” said Maude Barlow, founder of the Blue Planet Project, a group that advocates water as a human right.

“I visited the city and worked with the Detroit People’s Water Board several weeks ago and came away terribly upset,” she told IPS.

"Water bills are regressive, so low-income households pay a disproportionate amount of their income for water service." -- Mary Grant, researcher at Food & Water Watch
She pointed out that hundreds of thousands of people, mostly African Americans, are having their water ruthlessly turned off.

Families with children, the elderly and the sick, cannot bathe, flush their toilets or cook in their own homes, she added.

“This is the worst violation of the human right to water I have ever seen outside of the worst slums in the poorest countries in failed states of the global South,” said Barlow, a one-time senior advisor on water to a former President of the U.N. General Assembly.

Last March, the Detroit Water and Sewerage Department (DWSD) announced plans to shut off water service for 1,500 to 3,000 customers every week if their water bills were not paid. And on Tuesday, the City Council approved an 8.7-percent water rate increase.

According to a DWSD document, more than 80,000 residential households – in a city of 680,000 people – are in arrears, with thousands of families without water, and thousands more expected to lose access at any moment.

A group of NGOs has submitted a report to Catarina de Albuquerque, the U.N. Special Rapporteur on the Human Right to Safe Drinking Water and Sanitation, urging the United Nations to weigh in on the crisis and help restore water services and stop further cut-offs.

In a joint report released Wednesday, the Detroit People’s Water Board, the Blue Planet Project, the Michigan Welfare Rights Organisation and Food and Water Watch made several recommendations, including an appeal to the state of Michigan and the U.S. government to respect the human right to water and sanitation.

The report also calls on the city of Detroit to abandon its plans for further cut-offs and restore services to households that have suffered water cuts.

But as the crisis in Detroit shows, the situation is more complex and certain communities lack these essential services, she added.

When the U.N. Special Rapporteur on the Right to Water visited the United States last year, Food & Water Watch wrote a report delineating violations of the human right to water and sanitation across the country, primarily in rural, Latino and immigrant, Native American and homeless communities.

Grant said water shutoffs for non-payment are one way these violations are occurring.

In Detroit and other cities, she pointed out, households can lose access to drinking water and wastewater service when they cannot afford to pay their water bills.

The few low-income assistance programmes that exist are inadequate and fail to meet the needs of struggling households, she added.

“Water bills are regressive, so low-income households pay a disproportionate amount of their income for water service. Unfortunately, water rates across the country are increasing.”

She said there are many factors driving this: federal assistance for water infrastructure has been cut back by more than three-quarters since the 1970s, ageing systems are reaching the end of their lifespan, and water quality standards are getting stronger “as we learn more about the health risks of substances that contaminate our water.”

Grant said the shutoffs appear to be an attempt to make the water and sewer system more appealing to potential private investors.

Over the last decade, Detroit residents have seen water rates rise by 119 percent, according to a press release Wednesday.

With unemployment rates at a record high and the poverty rate at about 40 percent, Detroit water bills are unaffordable to a significant portion of the population.

Many of those affected by the shut-offs were given no warning.

“The infirm have been left without water and functioning toilets, children cannot bathe and parents cannot adequately prepare food for their families”, the press release said.

Barlow told IPS Detroit is “the canary in the coal mine.”

Through years of corruption and mismanagement, deep cuts to infrastructure and social security, the city is now bankrupt and unable to care for its people, she noted.

And years of neoliberal policies such as free trade, de-regulation and privatisation have allowed the wealth to be diverted to the suburbs and jobs to move overseas.

“Detroit is our collective future if we do not start re-investing in essential services, education and health care, local communities and sustainable local economic development,” said Barlow.

She said, “What is happening with these cut-offs is a social crime.Here in North America we are creating failed states and punishing the most vulnerable among us with these ruthless polices of savage capitalism.”

She said the city has experienced flight of wealth and business and as a result, the poorest and most vulnerable have had to pick up the tab for essential public services.

“Water rates have gone through the roof and people cannot pay. Let Detroit be our wake-up call. President Barack Obama must step in,” Barlow pleaded.