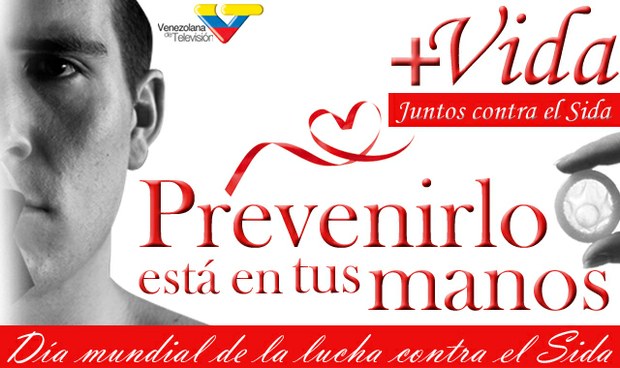 “Preventing It Is in Your Hands…World AIDS Day” – image from one of the government campaigns to prevent AIDS in Venezuela. Credit: Venezolana de Televisión

CARACAS, Jul 30 2014 (IPS) - Venezuela is gearing up to pass a new law to combat discrimination against people living with HIV/AIDS, in a country where the epidemic claims nearly 4,000 lives and infects 11,000 mainly young people every year, including increasing numbers of women.

In the first debate in the single-chamber legislature, where the bill was introduced by ombudswoman Gabriela Ramírez, it received unanimous backing from both the governing majority and the opposition – not a common occurrence in this severely polarised country.

When she presented the “law for the promotion and protection of the right to equality for people with HIV or AIDS and their family members” on Jul. 8, Ramírez said it “gives parliament an opportunity to promote equality and reduce the vulnerability of a segment of the population that has suffered discrimination.”

“HIV-related stigma and discrimination are the main barrier in the fight against this epidemic all around the world,” Alejandra Corao, the Joint United Nations Programme on HIV/AIDS (UNAIDS) official in Venezuela, told IPS.

“The most important thing is that 30 years after the arrival of the epidemic here, the state recognises that discrimination is a serious problem,” Alberto Nieves, director of the non-governmental organisation Citizen Action Against AIDS (ACCSI), told IPS.

“The most important thing is that 30 years after the arrival of the epidemic here, the state recognises that discrimination is a serious problem.” -- Alberto Nieves

Ombudswoman Ramírez pointed out that between 1982 and 2013 there were 31,512 officially documented cases of HIV/AIDS in this country. But Nieves believes the current number of cases is as high as the highest UNAIDS estímate – 160,000 cases.

The bill guarantees HIV-positive people equal conditions in terms of the right to work and hold public office, to education, healthcare, culture and sports, the benefits of social programmes, bank loans, confidentiality about their health status and respect for their prívate lives.

It also states that having AIDS cannot be grounds for the suspension of paternity rights, while establishing that families are responsable for caring for and protecting people living with HIV.

The law guarantees equality for young people, because 40 percent of new cases are in the 15-24 age group. It also does so in the case of women, for whom it orders that special care be provided during pregnancy, birth and the postpartum period, as well as for people with disabilities and prisoners.

The bill establishes penalties, disciplinary measures and fines for those found guilty of discrimination.

The idea is to prevent a repeat of situations such as one faced by a schoolteacher in a city in western Venezuela, who remains anonymous at her request. She was fired after a campaign against her was mounted by parents who discovered that she had gone to the AIDS unit in a hospital to undergo exams.

However, the miliary and the police are exempt from the protective provisions against discrimination.

“We do not agree with that exception,” Estevan Colina, an activist with the Venezuelan Network of Positive People, told IPS. “No one should be excluded and we hope for progress on that point when parliament’s Social Development Commission studies it and it goes to the plenary for the second debate,” which will be article by article.

Nieves is confident that the second reading will overturn the military-police exception. But more important, said the head of ACCSI, “is the positive aspect of the law, starting with the unanimous acceptance of a human rights issue by political groups that are so much at loggerheads in Venezuela’s polarised society.”

The law, which NGOs and activists expect to pass this year, will give a boost to anti-AIDS campaigns. The support will be similar in importance to that given by a July 1998 Supreme Court ruling that ordered public health institutions to provide free antiretrovial treatment to all people living with HIV.

In this country of 30 million a total of 43,000 people currently receive free antiretrovirals, equivalent to 73 percent of those requiring treatment, Corao said. The global average is 37 percent and the Latin American average 45 percent, UNAIDS reports.

Venezuela’s public expenditure on HIV/AIDS amounts to 100 million dollar a year, approximately half of which is spent on medication. But NGOs complain that the government effort is undermined by red tape and organisational problems.

“In some regions trained personnel is sometimes lacking to run the HIV/AIDS programme; coordination and transportation between the capital and the regions is deficient; and the pharmaceutical industry declines to take part in public tenders,” Nieves said.

Shortages of antiretrovirals trigger periodic protests by patients, in a country where “scarcity of medicine can range from 35 to 50 percent,” infectious disease specialist Julio Castro, with the local NGO Doctors for Health, told IPS.

“There is a feminisation of the epidemic, a phenomenon that is not exclusive to Venezuela, because in 2003 one in five HIV-positive people were women, compared to one in three in 2007,” Corao said.

“Women who are increasingly affected are not only sex workers but homemakers, employees and workers, professionals and students. And one of the main problems associated with this is domestic violence,” the UNAIDS representative added.

Another area where the disease is expanding is among adolescents and young people, the age group between 15 and 24 years, “because throughout Latin America there is a perception that the risk has gone down, and kids who did not live through the boom of the epidemic in the 1980s behave as if it were a problem of the past that has already been overcome,” the expert remarked.

In 2013 1.5 million people died of AIDS-related causes worldwide – 35 percent less than the 2.4 million of 2005. But in a report published Jul. 16, UNAIDS stated that of the 35 million people living with HIV around the world, an estimated 19 million are unaware of their HIV-positive status.