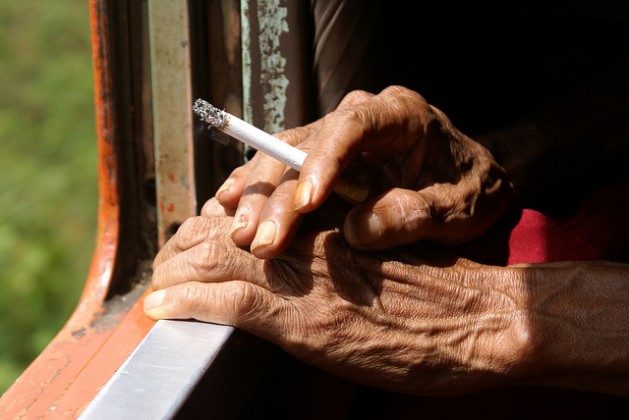 By 2030, 80 percent of deaths from tobacco will be in the poorest countries in Asia, Africa and South America. Credit: Bigstock

For example, maternal mortality, which is addressed in MDG 5, declined 45 percent from 1990 to 2013, while deaths of children under five (MDG 4) dropped from 12.4 million to 6.6 million worldwide from 1990 to 2012, (both statistics from the World Health Organisation).

If trends do not change, by 2030 NCDs will be the leading global cause of disability.

Despite those impressive advances, the world is facing new development challenges. For this reason, the Sustainable Development Goals (SDGs) that will replace the MDGs in 2015 must expand the list of health goals to include non-communicable diseases (NCDs) – the world’s #1 killer.

NCDs account for 60 percent (35 million) of all deaths. They include cancers, cardiovascular and lung disease, and diabetes, but they are not – as many people believe – ‘lifestyle’ diseases afflicting old people in rich countries. The largest burden – 80 percent, or 28 million deaths – occurs in low-middle-income countries (LMICs), making NCDs a major cause of poverty and an urgent development issue.

If trends do not change, by 2030 NCDs will be the leading global cause of disability. In addition, between 2011 and 2031 the diseases would have cost the world economy 30 trillion dollars, the equivalent of 98,400 dollars for every person in the United States.

Tobacco is the leading risk factor for NCDs. One hundred million people died from tobacco-related disease in the 20th century, and unless the global community acts decisively, one billion people will die in the 21st century. By 2030, 80 percent of deaths from tobacco will be in the poorest countries in Asia, Africa and South America.

In 2011, world leaders assembled for the first time at the United Nations to discuss the growing NCDs epidemic. The Political Declaration they issued concluded that the burden of NCDs “undermines social and economic development throughout the world”.

It noted that NCDs strike people in LMICs during their prime working years, and that close to half of all NCD deaths in these countries occur below the age of 70, and nearly 30 percent under age 60. As well, most NCDs deaths are preceded by long periods of ill health.

These illnesses, and early deaths of families’ main income earners, result in loss of productivity, which drags down economic growth and development.

Social determinants, such as education and income, influence people’s vulnerability to NCDs and exposure to risk factors. Individuals of lower education and economic status are increasingly exposed to NCDs risks and are disproportionately affected by them. For example, in countries such as Bangladesh, India and the Philippines, tobacco use is highest among the least educated and poorest segments of the populations.

At the same time, having an NCD may also contribute to social inequalities. The financial burden associated with these diseases increases the risk that families will be unable to send children to school and, under-educated, the risk grows that those children will live in poverty for the rest of their lives.

What can be done? There are four modifiable risk factors for the main NCDs: unhealthy diets, physical inactivity, harmful use of alcohol and tobacco use. While work continues to adopt global tools to tackle the first three factors, there is consensus on how to fight the tobacco epidemic.

In 2003, the world’s governments adopted the WHO Framework Convention on Tobacco Control, the first modern-day public health treaty. It contains a number of measures that Parties commit to implement, including: smoke-free public spaces, pictorial health warnings on packages, price and tax measures to increase the price of tobacco – which discourages consumption – and complete bans on tobacco advertising.

Today the FCTC has 178 Parties, representing nearly 90 percent of the world’s population. In the battle against NCDs, “There is no other ‘best buy’ for the money on offer”, said WHO Director-General Margaret Chan in 2011.

Recognising the potential of global tobacco control, the Political Declaration of the 2011 NCD Summit:

• Urged greater efforts from countries to implement the FCTC;
• Called on countries that are not Parties to the FCTC to accede to the Convention;
• Noted the importance of tobacco taxation as a strategy at the national level;
• Recognised the irreconcilable differences between the tobacco industry and public health policy.

Building on the Declaration, in May 2013 the World Health Assembly endorsed the Global Action Plan for the Prevention and Control of NCDs, 2013-2020. It includes a target for cutting tobacco use: a 30 percent relative reduction in smoking prevalence by the year 2025.

A stand-alone goal, Attain healthy lives for all, has been proposed for the SDGs. Its sub-goals include: “By 2030 reduce substantially morbidity and mortality from non-communicable diseases (NCDs) through prevention and treatment…” and “Strengthen implementation of the Framework Convention on Tobacco Control in all countries who have ratified the Convention and urge countries that have not ratified it to ratify and implement it”.

Including NCDs and the FCTC in the development goals that will be announced by the UN General Assembly in 2015 will also ensure that battling the tobacco epidemic becomes a national priority, and prevent millions of premature deaths.

Laurent Huber is Director of the Framework Convention Alliance.