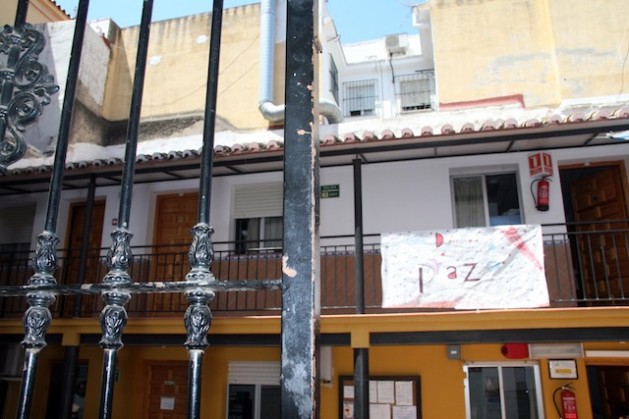 Spanish Refugee Aid Commission centre in the southern city of Malaga. The banner on the second floor balcony reads, “The right to live in peace.” Credit: Inés Benítez/IPS

MALAGA, Spain, Jul 21 2014 (IPS) - Little Samir covers his face with his hands as he plays under the orange tree in the centre of the inner courtyard of the Spanish Refugee Aid Commission (CEAR) centre in the southern city of Malaga. He is four years old and has spent nearly a year in Spain, where he arrived with his parents, fleeing the war in Syria.

Samir (not his real name) and his family, who remain anonymous at their request, were among millions of Syrians who abandoned their homes and way of life to escape the conflict that flared up in March 2011.

Some of those who seek protection in the European Union come to Spain by plane with a visa, but others come through Morocco, crossing the borders into the Spanish enclaves of Ceuta and Melilla in North Africa, with fake documents purchased on the black market.

“The journey from Syria to Spain can take up to three or four months,” Wassim Zabad, who is from Damascus and has lived in Malaga for 11 years, told IPS.

“Why does Spain offer less help to refugees and take longer to process asylum applications than Germany or Sweden? If I had known it, I would have travelled to another country." -- Adi Mohamed, a 33-year-old Syrian
Many people reach Morocco after travelling through Egypt, Libya and Algeria, said Zabad, who owns a travel agency specialising in taking Spanish tourists to Lebanon, Egypt and Syria. Business is bad because of the conflicts in those countries.

In his view, the conditions for refugees “are quite bad” in Spain, which is why “98 percent of Syrians” move on to other countries where they may have relatives or believe there are better facilities and economic assistance, especially France, Germany or Sweden.

Francisco Cansino, the CEAR coordinator for eastern Andalusia, told IPS that the majority of Syrians his organisation helps, coming from the Melilla Centre for the Temporary Stay of Immigrants (CETI), prefer to request asylum in other EU countries, although the standard procedure is for them to seek asylum in the country of entry, and this is what they are told.

The European Commission’s Dublin II Regulation of Feb. 18, 2003 establishes the principle that the first safe country entered by an asylum seeker is responsible for examining the asylum application, and provides for the transfer of an asylum seeker to that EU country.

“They don’t stay. They leave because they think their chances are better in other countries. They ask to leave the same day they arrive. They say they have relatives in Europe,” Cansino said. In his view, Syrian refugees are “suddenly facing an abyss of uncertainty.”

Four Syrians – a couple with two children – have been living at the Malaga CEAR centre for the past few weeks. They receive shelter, food, clothing, a monthly allowance (equivalent to 68 dollars per person), Spanish language classes and job training programmes. CEAR is an independent volunteer-based humanitarian organisation.

So far in 2014, some 200 people from Syria have been cared for in this centre, Cansino said.

“Only a minority of Syrian refugees come to Spain. The majority are displaced within Syria itself or seek safety in neighbouring countries,” David Ortiz, the head of the Red Cross Refugee Reception Centre in Malaga, told IPS.

At this Red Cross centre, one of seven in the country, 13 of the 20 beds are occupied by Syrians and Palestinians who were living in Syria. Among them are two families with children, who have been attending school since they arrived.

A total of 100,000 people have died in the war in Syria, 10,000 of them children. About 2.6 million people have fled to other countries, and 6.5 million are internally displaced, according to the United Nations High Commissioner for Refugees (UNHCR).

“Syrian refugees come to us tremendously traumatised,” said Ortiz. They have to rebuild their lives, learn a new language and find work in a country like Spain, where the unemployment rate is over 25 percent, he said.

A report on the situation of refugees in Spain, presented by CEAR in June, indicates that the country received 4,502 applications for asylum in 2013, compared to 2,588 in 2012, owing to an increase in applications from persons from Mali (1,478) and Syria (725).

According to Eurostat data cited in the CEAR report, in 2013 some 435,000 asylum seekers came to the EU. The largest group came from Syria (50,000) and the applications were mainly directed to Germany, with 109,580 applications, followed by France and Sweden. But only three percent of Syrian refugees have been granted asylum in Europe.

“I hope to find stability here in Spain,” said Adi Mohamed, a 33-year-old Syrian, who had a visa that allowed him to fly to Malaga in April, where he lives with some Syrian friends. He owns a restaurant in Palmira, near Homs, and he is worried about the safety of his parents and the five brothers and sisters he left behind.

Mohamed, who ran a restaurant with fifty employees, asked, “Why does Spain offer less help to refugees and take longer to process asylum applications than Germany or Sweden? If I had known it, I would have travelled to another country,” he said.

The length of stay in the refugee reception centres is six months, renewable for the same period in the “very frequent” case that the asylum application has not yet been determined. Families with children may stay for up to 18 months, Ortiz said.

“Asylum processing times are different in different EU countries, and so are benefits for refugees,” said Ortiz. He complained that the Dublin Regulation was “unfair” to oblige refugees to apply for asylum in the country where they first enter the bloc.

In a report published Jul. 9, Amnesty International (AI) says that while 1.82 billion euros (2.46 billion dollars) of EU funding was allocated to control of its external borders between 2007 and 2013, only 700 million (950 million dollars) was spent on improving the situation for asylum seekers.

The AI report accuses EU migration policies of “putting the lives and rights of refugees and migrants at risk” when they try to cross into the EU, especially through Bulgaria, Greece and Spain, and warns that some 23,000 people have lost their lives trying to get into Europe since 2000.

Several NGOs have denounced inadequate conditions at the Melilla CETI, which houses hundreds of Syrian and sub-Saharan migrants, as well as delays in processing asylum applications, which prevents them from leaving Ceuta or Melilla under Spanish law.

According to the UNHCR report ‘Syrian Refugees in Europe: What Europe Can Do to Ensure Protection and Solidarity’, published Jul. 11, the CETI was housing 2,161 people as of Jun. 12, when its maximum capacity is 480. Among them were 384 Syrian adults and 480 children.