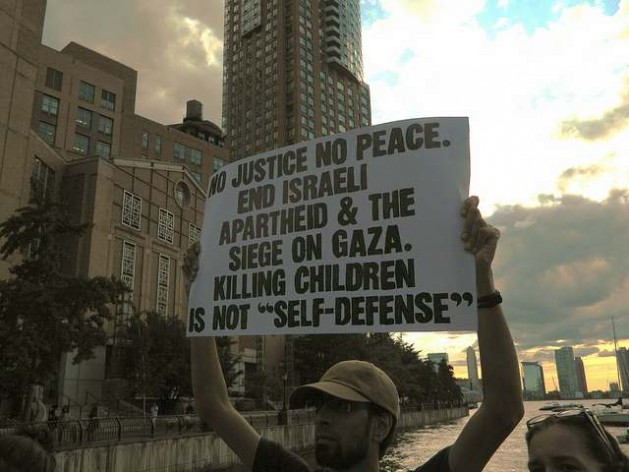 NEW YORK, Jul 27 2014 (IPS) - Thousands of New Yorkers took to the streets in multiple protests this past week against the Israeli offensive in Gaza, which has left at least 1,049 Palestinians dead and over 6,000 injured since Jul. 8.

Among demonstrators’ many demands was that the U.S. government end its massive flow of aid and arms to the Israeli Defense Forces (IDF), one of the world’s most powerful militaries.

The Campaign to End the Israeli Occupation estimates that the United States has shelled out over 100 billion dollars’ worth of military and economic aid since 1949. In 2007, the U.S. government pledged to provide 30 billion dollars worth of weapons to Israel in the decade 2009-2018. This year, according to the FY2015 budget submitted to Congress, the Barack Obama administration set aside three billion dollars for military aid.

The protests also had particular significance for New York City, whose former mayor, Michael Bloomberg, announced in 2011 his support for a 100-million-dollar partnership between Cornell University and Israel’s Institute of Technology (the Technion) that would allow the construction of a state-of-the-art new complex on Roosevelt Island. Thousands of U.S. citizens have called on the government to end military aid to Israel. Credit: Kanya D’Almeida/IPS

An alliance known as New Yorkers Against the Cornell-Technion Partnership (NYACT) says the Technion is “complicit in Israeli’s violation of international law and the rights of Palestinians”, namely its mandate to develop and design weapons and technologies that are used to enforce the occupation of the West Bank and the siege of Gaza.

Among other ‘achievements’, students at Technion were instrumental in creating the remote-controlled Caterpillar D-9 bulldozer, the IDF’s weapon of choice in demolishing Palestinian homes; and its Autonomous Systems Program (TASP) was responsible for developing the so-called ‘stealth drone’, capable of carrying two 1,100-pound ‘smart bombs’ for a distance of up to 2,000 miles.

Highly visible at both protests were members of the organisation known as ‘Neturei Karat International: Jews Against Zionism’, who carried signs proclaiming, “Jews reject the Zionist state of Israel and its atrocities”. A statement prepared by the organisation ‘Jews Against Zionism’ appeals to world leaders to “stop the latest ongoing cruelty and the attack on the people of Gaza.” Credit: Kanya DAlmeida/IPS

Others waved placards claiming “New York Jews Say ‘Not in Our Name’.”

Thursday’s action, which brought out over 2,000 people, was part of the National Day of Action for Gaza, endorsed by over 55 U.S.-based human rights groups. The protest followed on the heels of a demonstration by Jewish Voice for Peace on Jul. 22, which saw the arrest of nine Jewish activists for occupying the office of The Friends of the Israel Defense Forces in Manhattan. The Palestinian call for Boycott, Divestment and Sanctions (BDS) has cost Israel billions of dollars in investments. Credit: Kanya D’Almeida/IPS

One of the co-organisers of the march, Adalah-NY, handed out leaflets urging demonstrators to support the Palestinian call for Boycott, Divestment, and Sanctions against Israel, a non-violent civil society-based campaign modeled on the international boycott movement that was instrumental in dismantling apartheid in South Africa.