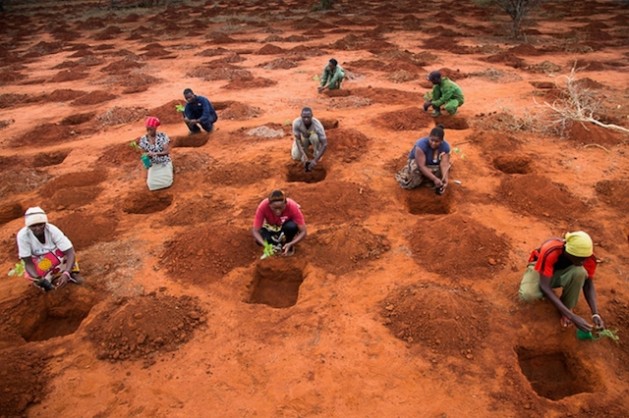 KASIGAU, Kenya, Aug 20 2014 (IPS) - When Mercy Ngaruiya first settled in Kasigau in south eastern Kenya a decade ago, she found a depleted forest that was the result of years of tree felling and bush clearing.

“This region was literally burning. There were no trees on my farm when I moved here, the area was so dry and people were cutting down trees and burning bushes for their livelihood,” Ngaruiya, a community leader in Kasigau, told IPS.

Back then, she says, poverty and unemployment levels were high, there was limited supply of fresh water, and education and health services were poor.

Mike Korchinsky, the president of Wildlife Works, a Reduced Emission from Deforestation and Forest Degradation (REDD+) project development and management company, remembers it all too well.

“When I came here, you could hear the sounds of axes as people constantly cut trees. Cutting down trees is doubly alarming because you have an immediate emission when the carbon that has been stored in the forest for centuries is released into the atmosphere, and then there is nothing to sequester the carbon that is being produced by human activities,” Korchinsky told IPS.

Tucked between Tsavo east and Tsavo west in Voi district, 150 kilometres northwest of Mombasa, Kenya’s coastal city, Kasigau region is slowly rising from the ashes as its green economy flourishes. This region of almost 100,000 people is beginning to grow as the Kasigau Corridor REDD+ project, implemented in 2004 through Wildlife Works, slowly bears fruit.

“Things are changing now since my fellow villagers agreed to embrace environmental conservation. The environment is continuing to improve,” Ngaruiya said.

The open canopy along the Kasigau corridor is now regenerating and the REDD+ project is empowering thousands of residents here to abandon forest destruction and embrace new, sustainable livelihoods. The green and vibrant section of Kasigau forest following conservation efforts and the successful implementation of a REDD+ project. Courtesy: Wildlife Works

Currently, the Kasigau REDD+ project generates over one million dollars annually through the sale of carbon, at about eight dollars per tonne, on the African Carbon Exchange.

One third of the revenue goes towards project development and is reinvested in income-generating green initiatives like manufacturing clothes (which are sold locally and internationally), agroforestry, and artificial charcoal production, among other activities.

A portion of the profit is also distributed directly to the land owners here.

“We no longer need to cut trees now for charcoal, we use biogas and eco-friendly charcoal made from pruned leaves. We cook while conserving trees,” resident Nicoleta Mwende told IPS.

Chief Pascal Kizaka is the administrator of Kasigau location. He told IPS that the REDD+ project has had real and direct solutions for poverty alleviation.

“Besides conservation, part of the profits has enabled construction of 20 modern classrooms in local schools, bursaries for over 1,800 pupils, a health centre and an industry — hence improving our standards of living,” Kizaka said.

The Kasigau project is the first verified REDD+ project in Kenya where communities living in the area are earning money from conserving their natural resources.

Trading in carbon credits is still in a nascent stage in Kenya.

But according to Alfred Gichu, the forestry climate change specialist at Kenya Forest Service, a state corporation that conserves and manages forests, the future of carbon credits trade in Kenya is bright.

There are 16 active, registered carbon credits projects and 26 others are in the process of being registered.

“Of the 26, 19 are energy-based, like the Geothermal Development Company, and seven involve reforestation projects,” Gichu told IPS. The expansive Mau forest in Kenya’s Rift Valley is a key target by the government for the carbon credits trade, he added.

When it comes to forests conservation, Kenya is one of the countries where policies have led to success according to “Deforestation Success Stories 2013” a report by the Tropical Forest and Climate Initiative.

The report cites the Kasigau Corridor REDD+ project as a major success story, noting that by late 2012, revenues generated from the sale of voluntary carbon credits from the project had reached 1.2 million dollars.

According to a UNEP’s 2013 “Emissions Gap” report, promotion of tree planting on farms, schools and other public institutions; prohibiting harvesting of trees in public forests; and awareness creation by both the government and private conservationists are some of the policy measures in Kenya that have boosted forest cover.

But there are also challenges that hinder development of REDD+ projects here.

Moses Kimani, the director of the African Carbon Exchange, cites lack of expertise and finances as some of the major challenges hindering development of carbon credits trade.

During last year’s United Nations climate change conference in Poland, participants agreed on a framework for REDD+ and pledged 280 million dollars in financing.

But environmentalists lament a lack of clear mechanisms to enable these adaptation funds to trickle down and reach local communities.

John Maina, an environmental conservationist, says that Kenyans running these projects were losing out to traders after selling carbon at throwaway prices due to low level of understanding.

“The government, civil society sector and NGOs should work together to strengthen regulations and sensitise Kenyans on carbon projects and how they can access financing,” Maina told IPS.

The writer can be contacted at pkahare@gmail.com