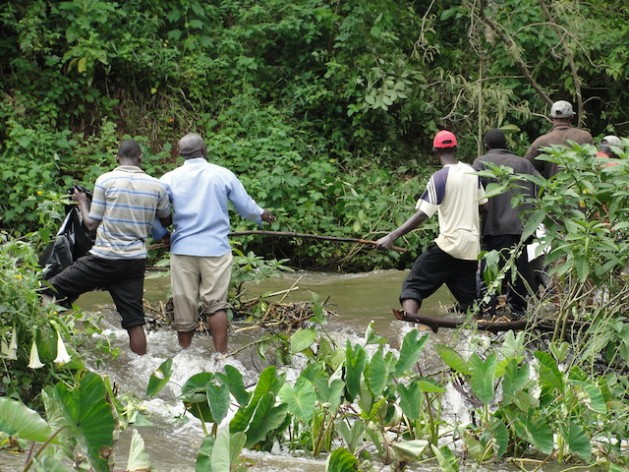 Farmers trying to build a barrier to protect their crops from the Nduyi River in Nyeri County. The river usually bursts its banks after a heavy downpour. Credit: Miriam Gathigah/IPS

“Although every now and then the Nduyi River bank bursts, flooding the farm, the loss is small compared to the good harvest and financial gains during good weather patterns,” Gichangi tells IPS.

But he is just one of a significant number of small-scale farmers who have taken to commercial farming in water catchment areas, according to the Ministry of Environment, Water and Natural Resources.

“The market forces and extreme hunger for a cash economy has been given dominance at the expense of our environmental and natural resource health.” -- Kevin Kinusu, Hivos

In this East African nation, smallholder farmers account for at least 75 percent of the total agricultural output, according to the Ministry of Agriculture, Livestock and Fisheries.

“Due to the scramble for scarce land and because agriculture here is rain-fed, we now have more and more farmers encroaching on water catchment areas,” Nancy Mumbi, a government agricultural researcher in Central Province, tells IPS.

She says this is especially prevalent in the Rift Valley, which is considered the country’s breadbasket, and Central Kenya.

Mumbi says the government is attempting to put a stop to the practice by imposing “fines of up to 600 dollars or imprisonment not exceeding six months or both.”

However, Ken Muchai from the Ministry of Environment, Water and Natural Resources warns “the lack of a national policy on natural resource management is leading to the depletion of our natural wealth.”

“We may not have any lions in the next 20 years, we are losing 100 lions per year to human-animal conflict,” he tells IPS.

He says that the draft Natural Resources Development and Management Policy 2012 will address these issues.

“And many other sectoral policies are already under review to facilitate conservation and management of natural resources.”

But while Kenya may have in place at least 90 pieces of legislation on how to manage its natural resources, experts say the country’s excess of legislation is weak and inadequate to meet the challenge of sustainably managing this.

Kevin Kinusu, the climate and energy advocacy officer at Hivos, the Dutch organisation for development, tells IPS that the weak laws have proved ineffective in the face of the country’s capitalist economy.

“Market forces have overlooked the importance of sustainable management of natural resources. Due to the current craze to develop real estate, wetlands in areas in Nairobi County, parts of Kiambu County and indeed in many other parts of the country have been converted into settlements.”

Kinusu explains that although there are policies like the Wetlands Atlas and the Master Plan for the Conservation and Management of Water Catchment Areas in place “we do not have a comprehensive policy on conservation of wetlands and there are [wetlands] facing severe pressure despite their importance as a water resource for agricultural productivity and in sustaining livelihoods.”

He says the real value of such protected areas has been ignored and “the market forces and extreme hunger for a cash economy has been given dominance at the expense of our environmental and natural resource health.”

Kinusu says that there have been a few success stories in management of natural wealth. This includes the rehabilitation of the Mau Forest ecosystem — the largest of the country’s five water towers. He points out that the country’s forest cover also increased “from a decline of about two percent to nearly six percent.”

Duncan Okowa, programme officer at local NGO Institute for Law and Environmental Governance (ILEG), tells IPS that the Environment Management and Coordination Act 1999 “should have served as the overarching policy.”

The act provides a framework for environmental legislation and for establishing appropriate legal and institutional mechanisms for the management of the environment.

However, he points out that the act itself has been overtaken by other legislation and is now outdated.

“For instance, there are demands in the 2010 Constitution that are not covered by the act. Also, most sectoral laws were enacted after the act had been developed, for instance we have the Water Act 2002, Forest Act 2005 and the Land Act 2012.”

For example, while the 2010 constitution demands that communities be at the heart of natural resource management, many are still left out of the country’s multi-billion dollar mining industry.

“The production-sharing contracts signed between the government and oil companies are often in favour of the companies since they are signed under the archaic Petroleum Act of 1986,” Samuel Kimeu, executive director of Transparency International Kenya, tells IPS.

“Unclear means of awarding mining licences have been used to fleece the public, compromising the terms of the licence against the public interest, thus swindling the public of possible revenue,” he says.

Okowa says that going forward laws must be reviewed to reflect new realities.

“An enabling environment for these laws to be effective must be created where implementing institutions are given both technical and financial support,” Okowa says.