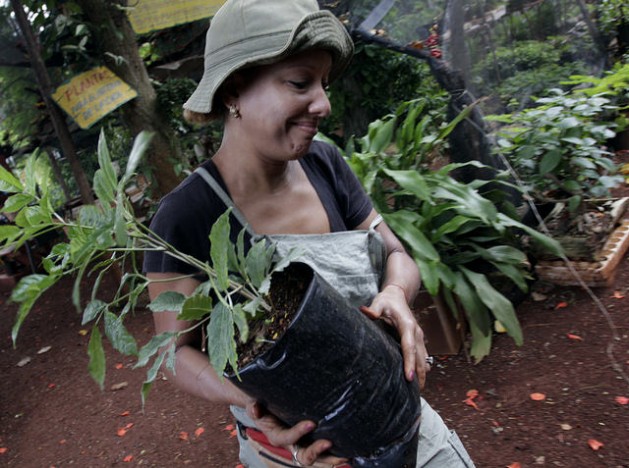 A member of the Vivero Alamar Cooperative carrying ornamental plants at a nursery in a suburb of Havana. Access to employment is a problem for women in rural areas. Credit: Jorge Luis Baños/IPS

HAVANA, Sep 30 2014 (IPS) - Leonor Pedroso’s sewing machine has dressed children in the Cuban town of Florida for 30 years. But it was only a few months ago that the seamstress was able to become formally self-employed.

“My husband, a small farmer, didn’t let me work outside the home,” Pedroso, 63, told IPS. “I could only sew things for neighbours or close friends, for free or really cheap. According to him, jobs weren’t for women.”

She is now one of the beneficiaries of a project funded by international development aid that helps women entrepreneurs with the aim of closing the gender gap, as part of the economic reforms underway in this socialist Caribbean island nation.

Pedroso, whose main activities were running the household and raising the couple’s four children, did not have a stable enough flow of income or the knowledge to capitalise on her skills until she took courses in business plan development and management and gender along with other female entrepreneurs.

“I stood up to my husband, to do what I like to do, and now I am setting up a business in my home, to sell what I make and to teach young girls to sew and embroider,” she said with satisfaction, while waiting for the delivery of new sewing machines for her business.

“I moved to where I could find work because I couldn’t let my 12-year-old daughter go hungry. Then I learned how to sell my harvest and invest the money I earn.” -- Neysi Fernández

She is now a new member of the local Producción Animal 25 Aniversario Cooperative.

The project, carried out by ACSUR Las Segovias, a non-governmental organisation from Spain, and the local Asociación Nacional de Agricultores Pequeños (ANAP – National Association of Small Farmers), with financing from the European Union, provides training and inputs to 24 women, including farmers, craftmakers and rural leaders.

The project, whose formal title is “incorporation of rural female entrepreneurs into local socioeconomic development from a gender perspective”, has helped women who have traditionally been homemakers to generate an income. It is to be completed at the end of the year.

The women involved are in Artemisa, a province near Havana; Camagüey, a province in east-central Cuba, where Florida is located; and the eastern province of Granma.

“In the past, men were seen as the breadwinners and the owners of the land, but women have started to understand what they themselves contribute to the family economy,” Lorena Rodríguez, who works in the area of projects with ACSUR Las Segovia, told IPS.

She said “machismo” and sexism continue to stand in the way of the incorporation of rural women in the labour market.

One of the women involved in the project is Neysi Fernández who, seeking a way to make a living, moved from her hometown of Yateras in the eastern province of Guantánamo to Guanajay in the province of Artemisa, where a family member offered her a piece of land to work.

On the four hectares of land she is planting cassava, malanga (a tuber resembling a sweet potato), beans, maize and plantains.

“I moved to where I could find work because I couldn’t let my 12-year-old daughter go hungry,” the 42-year-old small farmer, who married a manual labourer four years ago, told IPS. “Then I learned how to sell my harvest and invest the money I earn.”

According to social researchers, the problem of access to remunerated work is one of the worst forms of inequality in rural areas in Cuba. Women represent 47 percent of the more than 2.8 million rural inhabitants in this country of 11.2 million people.

The work carried out by the wives and daughters of small farmers – raising livestock, tending family gardens, taking care of the home and raising children – is not recognised or remunerated, speakers said at the third review meeting of the National Action Plan held in 2013 to follow up on the Fourth World Conference on Women in Beijing.

Only 65,993 women belong to ANAP, and they represent just 17 percent of the association’s total membership, according to figures published this year by Cuba’s daily newspaper, Granma.

Women make up 142,300 of the 1.838 million people who work in agriculture, livestock, forestry and fishing in Cuba, according to 2013 data from the national statistics office, ONEI.

The economic reforms undertaken by President Raúl Castro since 2008, with the aim of reviving the country’s flagging economy, have included the distribution of idle land under decree laws 259 of 2008, and 300 of 2012.

The objective is to boost food production in a country where 40 percent of the farmland is now in private hands, according to ONEI’s 2013 statistical yearbook.

But it is still mainly men who have the land, credits and farm machinery, and they remain a majority when it comes to decision-making in rural areas.

Given the lack of affirmative action by the state to boost female participation in rural areas, several civil society organisations and international aid agencies have been working to foster local development with a gender perspective.

With backing from the international relief and development organisation Oxfam, more than 15 women’s collective business enterprises will be operating in 10 municipalities in eastern Cuba by the end of the year. They include a flower shop, beauty salon, laundry, cheese shop, and several tire repair businesses.

With funds from the European Union, the Basque Agency for Development Cooperation and the Japanese Embassy in Cuba, the small businesses have been furnished with equipment and vehicles for transportation. In addition, the participants have taken part in workshops on self-esteem, leadership and personal growth.

According to sociologist Yohanka Valdés, the value of these projects lies in the strengthening of women’s capacity through empowerment and recognition of their rights.

“If an opportunity emerges, men are in a better position to take advantage of it because they don’t have to take care of the family,” the researcher told IPS.

Economist Dayma Echevarría says the female half of the population is at a disadvantage when it comes to the diversification of non-state activities in Cuba.

She says gender stereotypes in Cuba keep women in their role as homemakers and primary caretakers.

In one of the chapters of the book on the Cuban economy, “Miradas a la economía cubana” (Editorial Caminos, 2013), Echevarría says the lack of support services for caretakers is one of the reasons for rural women’s vulnerability when it comes to employment.

The recent process of land distribution has not translated into opportunities for boosting gender equality because it failed to foster active female participation, according to the expert.

At the same time, there are few Cuban women with the resources to set up their own businesses within the current regulatory framework.

Echevarría said Cubans were still waiting for the implementation of regulations that would enable more equitable insertion of women under the new labour conditions while incorporating a gender focus.

Cuba is in 15th place in the Global Gender Gap Report 2013, but in the subindex on economic participation and opportunity it ranks 66th out of the 153 countries studied.