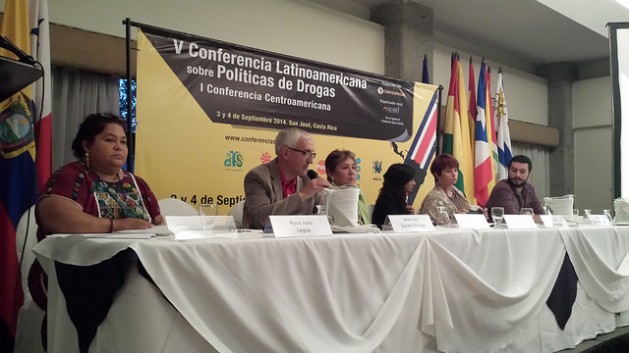 Rosa Julia Leyva, to the left, with other participants in the Drugs and Social Inclusion panel at the Fifth Latin American Conference on Drug Policies, held in San José, Costa Rica. She spent 12 years in prison for smuggling a small stash of heroin in a bag that a friend gave her to carry. Credit: Diego Arguedas Ortiz/IPS

SAN JOSE, Sep 5 2014 (IPS) - Poor young men, slumdwellers and single mothers are hurt the most by anti-drug policies in Latin America, according to representatives of governments, social organisations and multilateral bodies meeting at the Fifth Latin American Conference on Drug Policies.

During the Sept. 3-4 conference held in San José, Costa Rica, activists, experts and decision-makers from throughout the region demanded reforms of these policies, to ease the pressure on vulnerable groups and shift the focus of law enforcement measures to those who benefit the most from the drug trade.

Today things are backwards – the focus is on “the small fish” rather than “the big fish”, Paul Simons, the executive secretary of the Inter-American Drug Abuse Control Commission (CICAD), told IPS.

The proposals set forth during the meeting recommended an overhaul of the legal systems in Latin America, to reduce incarceration and establish sentences proportionate to minor crimes. The participants argued that laws and the justice systems should focus on cracking down on the big interests involved in drug trafficking.

They also recommended that amounts for legal personal possession should be established, along with measures such as the decriminalisation of some drugs or the creation of markets controlled by the state, along the lines of what Uruguay is doing in the case of marijuana.

The current policies give rise to cases like that of Rosa Julia Leyva, an indigenous Mexican woman who now works in the Mexican interior ministry’s National Commission on Security.

Leyva was imprisoned in 1993 for carrying a woven bag with a small package of heroin, which was given to her by a friend who paid her plane ticket in exchange for help with her baggage. It was the first time she had ever left the Petatlán mountains in the southwest state of Guerrero. Until her arrest, she told IPS, she thought she was carrying money or clothes.

At the time, she was the prototype of the women who are constantly thrown into Latin American prisons for drug smuggling: an illiterate 29-year-old, the mother of a five-year-old daughter, sentenced to a quarter century in prison for possession of heroin.

“I’m just a poor woman who went through something very difficult. I had nothing to do with drugs and I never could have imagined that they would give me 25 years for drug trafficking. They made out like I was a big drug smuggler and I didn’t even speak Spanish.” --Rosa Julia Leyva

The Organisation of American States (OAS) reports that 70 percent of the female prison population in the region was incarcerated for drug possession.

“I’m just a poor woman who went through something very difficult,” Leyva says. “I had nothing to do with drugs and I never could have imagined that they would give me 25 years for drug trafficking. They made out like I was a big drug smuggler and I didn’t even speak Spanish.”

“I think the law should be more specific in these things,” said Leyva, who also makes crafts. She managed to get her sentence reduced to 13 years, of which she served just over 12. Now she gives theatre classes in Mexican prisons.

In the world’s most unequal region, the prisons are packed full of poor people, while white collar criminals are much less likely to be brought to justice, said experts participating in the “Drugs and Social Inclusion” panel during the conference.

This imbalance and overcrowding of the prisons could change, they said, if the courts and prison systems made the effort.

“We want to see who is brought before the courts, and look into options for people who are not violent and who have committed minor crimes, as consumers, drug mules [who smuggle small quantities] or people who committed the crime to feed themselves and their families,” Simons told IPS.

“They are the small fish, like bus drivers or mules, who smuggle small quantities without any violence in a region full of contrasts,” said the head of CICAD, which forms part of the OAS. “We want to see if there is a way for these people not to be caught up in the prison cycle.”

In a region where 10 of the most unequal countries in the world are located, “drug policies must be reformulated,” said Yoriko Yasukawa, resident coordinator of the United Nations Development Programme (UNDP) in Costa Rica.

The proportionality of sentences in cases like Leyva’s was a recurrent theme among the experts, who called for a “more just” legal system in line with the real damage caused by people convicted of drug-related crimes.

“Sometimes the punishment is comparable to the penalties for homicide or other serious crimes,” Argentine social worker Graciela Touzé told IPS.

“It is not similar to the damage caused, and the punishment can’t be similar either, although that does not mean that they shouldn’t be held accountable,” added the president of the Intercambios Asociación Civil, an organisation based in Buenos Aires.

During the regional conference, speakers were adamant in their criticism of the social costs of repressive anti-drug policies.

Costa Rica’s minister of public security, Celso Gamboa, explained that the people arrested in his country in the first eight months of 2014 included fishermen, flight attendants and drivers who were drawn into drug smuggling by poverty.

“The blows to drug trafficking structures have focused on the most vulnerable parts, which leads us to conclude that much of the fight against drugs in Costa Rica and the rest of Latin America fuels the criminalisation of poverty,” he said.

“The question is: where are the investigations enabling us to reach the white collar structures and those who hold the real power?” said Gamboa, a former prosecutor from the Caribbean province of Limón, where he was involved in hundreds of drug trafficking cases.

Above and beyond the complicated situation in the prisons, civil society organisations insisted that anti-drug policies are marked by inequality. For that reason, activists said, drug consumers and young people are punished more harshly.

But the different proposals for redressing the imbalance sometimes clash.

Gamboa believes in tackling the drug problem with an economics-based approach that goes after the big fish who hold the real money, while Zara Snapp, of the Mexican Movement for Peace with Justice and Dignity, says the best way to reduce the number of civilian victims of the drug trade is by creating a market in Mexico regulated by the state.

“The inequality does not mean that there isn’t a lot that we can do, because we still have many resources, it’s just that we channel them into the militarisation of the struggle and into law enforcement, rather than towards creating opportunities for the vulnerable populations,” the Mexican activist, who also forms part of the non-governmental Mexican Commission for the Promotion of Human Right, told IPS.

“The only thing that approach does is to create fertile ground for recruitment by organised crime,” she said.

It is poor young men and women who pay the cost. According to the OAS, the prevalence of consumption of “pasta base” or cocaine paste is 1.8 percent overall, but 8.0 percent among young people in poverty.

The stigma surrounding the use of pasta base accentuates their marginalisation and further limits their opportunities, according to the Report on the Drug Problem in the Americas.