UNITED NATIONS, Oct 29 2014 (IPS) - As the world marks the 25th anniversary of the fall of the famous Berlin Wall leading to the reunification of the country and the end of the cold war, a little noted event occurred nearly two decades before the fall that ushered in a trend having profound consequences for the future of Germany as well as for Europe:  German births declined below deaths.

During the 20th century, except for a few years during the two world wars, the annual number of births exceeded deaths in Germany up until 1972. For every year since that fateful date, births have never exceeded deaths (Figure 1). 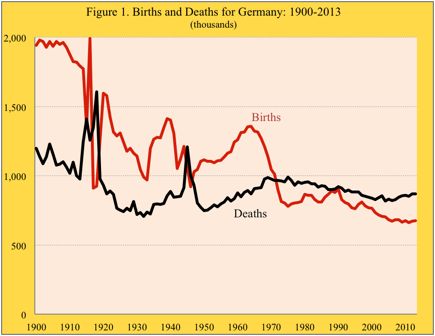 The historic demographic turnaround in Germany was not due to increasing deaths. On the contrary, the numbers of deaths during the 1970s and 1980s were decreasing and German life expectancies at birth increased by several years for both males and females over the period.

Actually, Germany’s demographic turnaround was the result of declining births as the country’s fertility rate fell below the replacement level.

For nearly 40 years Germany’s fertility has hovered around 1.4 births per women, or a third less than the replacement level of about two births per woman.

Despite the sustained negative rate of natural increase, Germany’s population remained close to 80 million largely due to international migration.

While admittedly the future remains uncertain, the likely paths for Germany’s key demographic components over the coming decades appear reasonably evident. First, mortality rates are expected to remain low as well as improve. Consequently, German life expectancies at birth are expected to increase by six years by mid-century, reaching 83 and 88 years for males and females, respectively.

Second, while fertility may increase somewhat from its current level of 1.4 births per woman, among the lowest in Europe, few expect that it will return to the replacement level any time soon. Approximately 20 percent of the women eventually remain childless and few couples are choosing to have more than two children. Recent population projections anticipate fertility likely increasing to 1.6 births by mid-century and 1.8 births by the century’s close.

Recently released figures for 2013 indicate the highest level of immigration to Germany in 20 years, yielding a net immigration of 437,000 or more than double the number of excess deaths over births.

While the future population size of Germany could follow a number of possible scenarios, the overall conclusion of most population projections is the same: a smaller German population in the future. For example, if fertility and life expectancies increased slightly and net migration levels were moderate, Germany’s current population of 83 million would decline to slightly below 73 million by mid-century.

However, if Germany’s current low fertility were to remain unchanged, its projected population in 2050 would be 69 million.

If some how German fertility rose steadily back to the replacement level by 2050, its population size at that time would still be a couple million less than today. Aside from large-scale immigration, Germany’s fertility would need to increase rapidly to avoid a smaller future population.

Even if fertility were to rise instantly and remain at the replacement level of 2.1 births per woman – an unlikely yet instructive scenario – Germany’s population would change little, hovering around 84 million at mid-century.

Germany’s future population is also being impacted by immigration, which is offsetting declines due to negative natural population change as well as the sizeable numbers leaving Germany. If immigration were to cease, the decline in Germany’s population would even be greater than noted above, falling to 67 million by 2050.

In addition to being less populous in the future, Germany’s population will be decidedly older. Germany’s current median age of 46 years – the world’s second highest after Japan – is expected to increase to 51 years by 2050. Also, the proportion of the German population aged 65 years and older is projected to increase from a fifth to more than a third.

Consequently, Germany’s potential support ratio is expected to fall to half its current level by mid-century, declining from about 3 to 1.5 persons aged 20 to 64 years per person 65 years or older.

An evident consequence of Germany’s ageing population is the raising of its retirement age incrementally from 65 to 67 years. Also, the proportion of the population aged 55 to 64 years who are in the work force has risen to 62 percent from 39 percent in 2002.

A further consequence of Germany’s demographics is its perception as a nation. Twenty-five years ago, former Chancellor Helmut Kohl declared that Germany “is not and can never be an immigration country”. Clearly, that is no longer the case.

Germany now hosts nearly 10 million immigrants or 12 percent of its population. Also, recently Germany has become the second most popular immigration destination after the United States, overtaking Canada and Australia.

Only two countries have more immigrants than Germany: Russia and the United States. Most immigrants to Germany come from other European countries, particularly from Italy, Poland, Russia and Turkey.

Despite those demographic changes, Chancellor Angela Merkel has concluded that attempts to build a multicultural society in Germany have “utterly failed.” Nevertheless, recognising Germany’s ageing and declining population, she has also made clear that immigrants are welcome in Germany and the nation needs immigrants, but mainly from other European countries.

The changing demographics also have consequences for the relative population standing of European countries. After the Russian Federation with a population of 144 million, Germany’s population of 83 million is the largest population in Europe, followed by France and the United Kingdom at 63 and 62 million, respectively.

By mid-century, however, differential rates of demographic growth are expected to result in Germany’s population falling to fourth place, below the populations of both France and the United Kingdom.