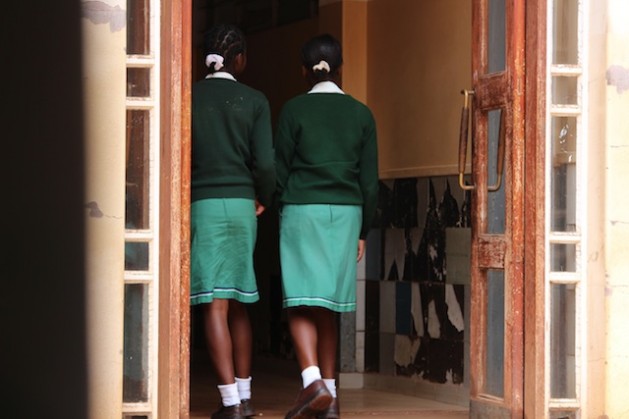 BULAWAYO, Zimbabwe, Oct 1 2014 (IPS) - Pregnant at 15, Samantha Yakubu* is in a fix. The 16-year-old boy she claims was responsible for her pregnancy has refused to accept her version of events, insisting that he was “not the only one who slept with her”.

Now Yakubu has dropped out of school and, like many sexually active youth in Zimbabwe, faces an uncertain future.

The issue of contraceptive use remains controversial and divisive in this country of 13.72 million people.

Parents and educators are agreed on one thing: that levels of sexual activity among high-school students are on the rise. What they do not agree on, however, is how to deal with the corresponding inrcrease in teenage pregnancies.

“Lack of adequate, medically accurate information on puberty leaves young people dependent on uninformed peer sources and unguided Internet searches for information." -- Stewart Muchapera, communications analyst with the UNFPA in Zimbabwe.
While Zimbabwe has made huge gains in some areas of reproductive health, including stemming new HIV infections, according to the Health Ministry, various United Nations agencies have raised concerns about the growing number of adolescent pregnancies, which experts say point to a low use of prophylactics and a dearth of other family planning methods.

According to the U.N. Population Fund (UNFPA), contraceptive use in Zimbabwe stands at 59 percent, one of the highest in sub-Saharan Africa. Still, this is lower than the 68 percent mark that the government pledged to achieve by 2020 at the 2012 London Summit on Family Planning.

A proposal last year by a senior government official to introduce contraceptives into schools, allowing condoms to be distributed free of charge, was met with disbelief and anger among parents, who insisted this was tantamount to promoting promiscuity among learners.

There is still no agreement between parents and educators about the stage at which students can be introduced to sex education.

“The fertility rate among teenage girls aged 15-19 in 2010/11 was 115 per 1,000 girls, a significant increase from 99 per 1,000 girls in 2005/6,” Muchapera tells IPS, adding that geographic location also determines the likelihood of early pregnancy, with girls living in rural areas twice as likely to be affected than their urban counterparts.

The Zimbabwe Demographic and Health Survey (ZDHS) reports that nine out of 10 sexually active girls aged 15 to 19 are in some form of a marriage, and that for two out of three girls who first had sex before age the of 15, sex was forced against their will.

Janet Siziba, a peer educator with the Matabeleland Aids Council, says there is a stigma attached to early pregnancy, with many forced to drop out of school or endure financial hardships after the birth of a child, particularly after the disappearance of an adolescent father.

“You can escape both pregnancy and HIV by increased condom use and, perhaps more importantly, by using other female contraceptives [such as the female condom and oral contraceptives],” Siziba tells IPS.

But with young people getting mixed messages on contraceptives, the trend is unlikely to change anytime soon. In fact, the country’s registrar-general Tobaiwa Mudede has actually warned women against using contraceptives, on the grounds that they cause cancer and are a ploy by developed countries to stem population growth in Africa.

Through its National Adolescent Sexual and Reproductive Health Strategy (ASRH), the Ministry of Health now allows adolescents to access contraceptives at public institutions such as clinics and hospitals, but peer educators are concerned that youth are not too eager to collect contraceptives in full view of the public.

Experts say that conservative attitudes towards contraceptive use could slow down global efforts under the multi-sector Family Planning 2020 (FP2020) initiative, which seeks to increase access to contraception for women and girls between 15 and 49 years of age in developing countries.

According to the Bill and Melinda Gates Foundation–supported FP2020 project, 260 million people from developing countries had access to contraceptives in 2012, and the initiative aims to add 120 million more by the year 2020.