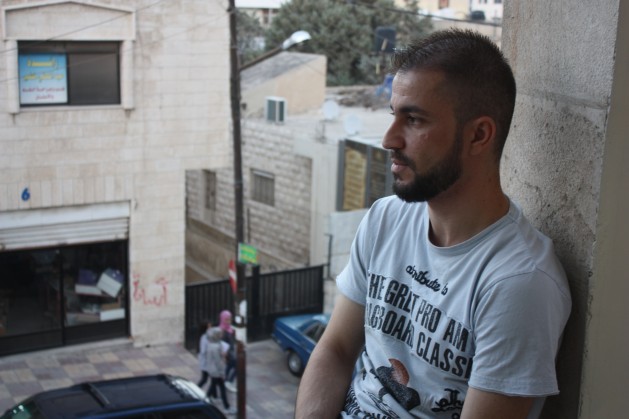 Marvin Nafee, an Iraqi Christian who fled to Jordan to escape the Islamic State, prays for “the safe Mosul from ten years ago where everyone co-existed peacefully”. Credit: Areej Abuqudairi/IPS

AMMAN, Oct 31 2014 (IPS) - Watching videos and pictures on social media of the advance of the Islamic State (IS) inside Syria made it all seem far from reality to Iraqi Marvin Nafee.

Only months later, his home city Mosul fell to the IS in two hours and he and thousands of Christians had to flee. Marvin made his way to Jordan, along with his father, mother and two brothers.

“The Middle East is no longer safe for us. As Christians we have been suffering since 2003 and always feared persecution” – a 60-year-old Iraqi refugee

“There is nothing like peace and safety,” he told IPS from the Latin Church in Marka neighbourhood in Amman, which he has been calling home for the past two months.

In July, the IS  issued an order telling Christians living in Mosul to either convert to Islam, pay tax, or give up their belongings and leave the city. Failure to do so would result in a death penalty, “as a last resort”.

“Mosul is empty of Christians now. Everyone we know has left, except for a group of elderly in a care centre who were forced to convert to Islam,” Marvin said.

Since August, thousands of Iraqis have been streaming to Jordan through Erbil.

Caritas spokesperson Dana Shahin told IPS that 4,000 Iraqi Christians have approached the Caritas office in Jordan since August, and 2000 of them have been placed in churches.

Churches in the capital and the northern cities of Zarqa and Salt have been turned into temporary refugee camps, with families living in the yards and hallways.

In Maraka’s Latin Church, around 85 people share a 7×3 metre room. Children, elderly, men and women sleep on the floor with extra mattresses dividing the room to give them privacy. They use the cafeteria facilities to prepare meals using food items donated by Caritas.

“It was generous of Jordan to offer what it can, but this is not an ideal living situation for anyone,” says a 53-year-old woman, who gave her name as Um George.

Having been stripped of all of their possessions by the IS, most of them arrived in Jordan penniless and carrying little more than what they were wearing. “They [IS] searched everyone, including children, for money,” said Marvin’s 25-year-old brother Ihab. “We gave it all to them for the sake of safety,” he added.

The Islamic Charity Centre Society has provided pre-fabricated caravans to be used by families in the yards of churches, and a few families have been relocated to rental apartments shared by more than one family. Caritas provides basic shelter, food, medical treatment, and clothes. But a durable solution for these families is yet to be found.

“We are still evaluating their needs. Most of these families have fled with almost nothing,” said Andrew Harper, representative of the U.N. Refugee Agency (UNHCR) in Jordan. His organisation registered an average of 120 new Iraqis every day in August and September, with more than 60 percent citing fear of IS as their reason for fleeing Iraq.

Around 11,000 Iraqis have registered with UNHCR this year, bringing the total number of Iraqis in Jordan to 37,067.

Jordan has been home to thousands of Iraqi refugees since 2003, and many of these live in dire conditions, struggling to make ends meet as aid funds dry up.

“Iraqi refugees remain on the margin of donors and institutions,” says Eman Ismaeel, manager of the Iraqi refugee programme at CARE International in Amman.

Unable to work legally, Iraqi families live in the poorest neighbourhoods of East Amman and Zarqa city. They struggle to pay rent and send their children to school.

The new influx of Iraqi refugees has introduced a new challenge for aid agencies operating in resource-poor Jordan, which is already home to more than 618,500 Syrian refugees.

“We have more refugees than we have ever had since the Second World War, but resources are dire,” said Harper. “We are challenged every day, but we hope to get through with international support,” he added.

Most of the newly-arrived Iraqi refugees interviewed by IPS said that they want to be resettled in Western countries. “The Middle East is no longer safe for us,” said 60-year-old Hanna (who declined to give her last name). “As Christians we have been suffering since 2003 and always feared persecution,” she added, noting that she and her daughters had been covering their hair to “avoid harassment”.

But resettlement “in reality is a long process and is based on vulnerability criteria,” said Harper, and thousands of Iraqis in Jordan have been waiting to be resettled in Jordan for years.

Back in Marka, Marvin points to a picture of his house back in Mosul stamped in red with “Property of the Islamic State” and the Arabic letter Nfor Nasara (Christians). A Muslim friend who is still in Mosul sent him the picture. More bad news followed from his friend, who emailed to say that Marvin’s house had been taken over by IS members.

Although he has lost hope that one day he and his family will be able see a glimpse of Iraq again, Marvin still has faith that prayers can bring peace back. “We always pray for the safe Mosul from ten years ago where everyone co-existed peacefully.”