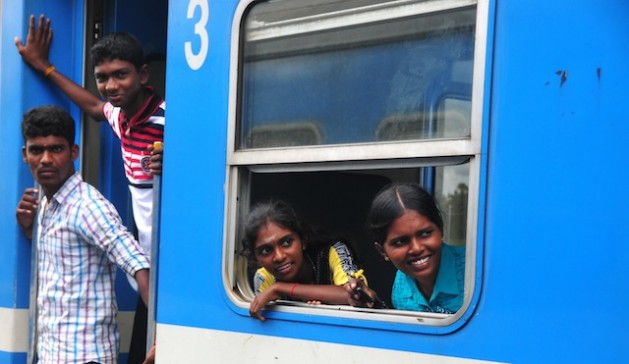 Youth ride on a southbound train on the newly laid northern rail track near Mankulam in the northern Kilinochchi District. Built in 1914 with the final aim of linking Sri Lanka with southern India, operations on the line ceased in 1990 before recommencing in late 2013. Credit: Amantha Perera/IPS

For hours on end, they wait expectantly at the edge of the rails for a track construction engine to pass by; when it nears, they rush to place metal coins on the track and when the trundling vehicle has passed, they run back gleefully to pick up the disfigured money.

This little ritual is just one of many signs that the new line, re-laid here after 24 years, is a big deal all over the Vanni, the northern region of Sri Lanka that bore the brunt of the country’s three-decade-old conflict that ended in May 2009. 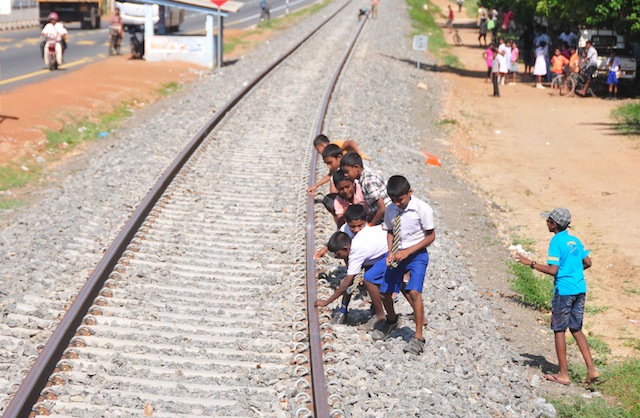 Playful children run to the train track in the village of Kodikaman to collect their coins, which they had placed on the rails to be flattened by passing construction engines. Credit: Amantha Perera/IPS

The last train that plied the line through Kodikaman, some 380 km north of the capital, Colombo, ran on the night of Jun. 13, 1990, when the separatist Liberation Tigers of Tamil Eelam (LTTE) attacked the popular Yal Devi (Jaffna Princess) express.

The Yal Devi had previously been attacked in 1985, also by the Tigers, resulting in reduced train service throughout Sri Lanka’s northern province for almost an entire generation.

So when the first trains to enter the Vanni in over two decades did so in September 2013, school children came out in hordes just to catch a glimpse of the carriages passing through Kilinochichi, the town that was, for over a decade, the Tigers’ de-facto economic and administrative nerve centre. 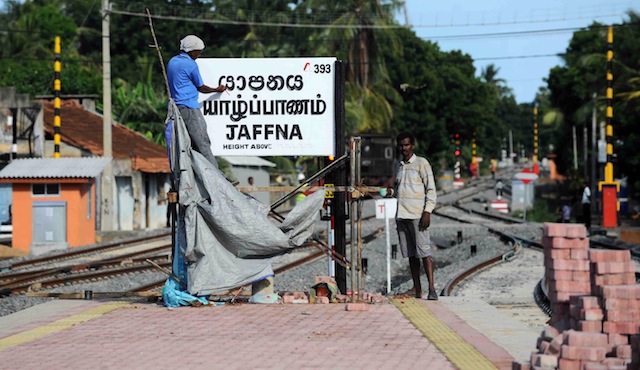 Workers put the final touches on the main railway station in the northern Sri Lankan town of Jaffna, days before its scheduled opening on Oct. 13. Credit: Amantha Perera/IPS

“The entire public here is waiting for this dream to come true,” said S L Gupta, project director for IRCON, the government-owned Indian company – a subsidiary of Indian Railways – that is reconstructing 252 km of train links in the Vanni at a cost of 800 million dollars.

The project got off the ground in February 2011 and large sections have already been completed. Trains now ply up to Madhu Road on the northwestern line and up to Pallai, about 17 km south of Jaffna, on the northern line.

On Oct. 13, Sri Lankan President Mahinda Rajapaksa will officially declare open the track all the way to Jaffna. 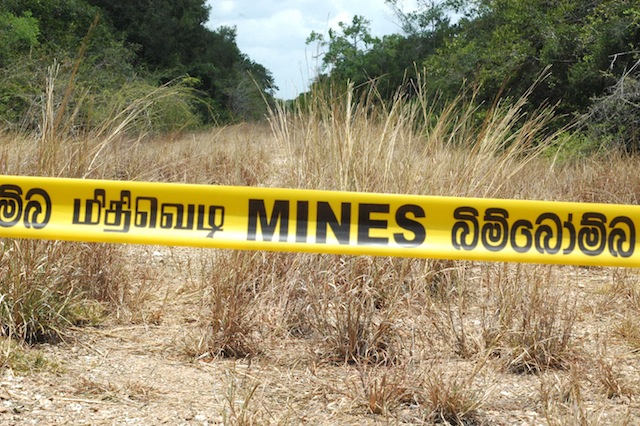 Mine warning signs keep visitors off the cleared jungle path where the northern railway once ran, near the village of Murukandhi, in the Kilinochchi District of Sri Lanka’s Northern Province. Credit: Amantha Perera/IPS

“It will be momentous,” Gupta asserted.

Vadevil Jayakumar, a native of Kilinochchi, agrees with this assessment. He takes the train weekly with his wife, his sister and his young niece.

“It’s cheap, it’s convenient and faster than the bus,” Jayakumar told IPS, riding on the footrest of one of the carriages, his sister and niece occupying the open door at the other end of the train car.

Indeed, a ticket from Colombo all the way up to the Vanni – covering a distance of some 264 km – costs just 180 rupees (about 1.25 dollars). But the novelty of the trains, many say, ends there.

“Very few take the train, they prefer the bus still,” said Nesarathnam Praveen, the 23-year-old stationmaster of the Madhu Road terminus. He says the bulk of his commuters pass through here only when there are festivals at the famous Madhu Church, which attracts thousands from in and outside the province.

Even on the Yal Devi, returning from Colombo on a stifling October afternoon, the bulk of the passengers are government military personnel returning to their posts up north. 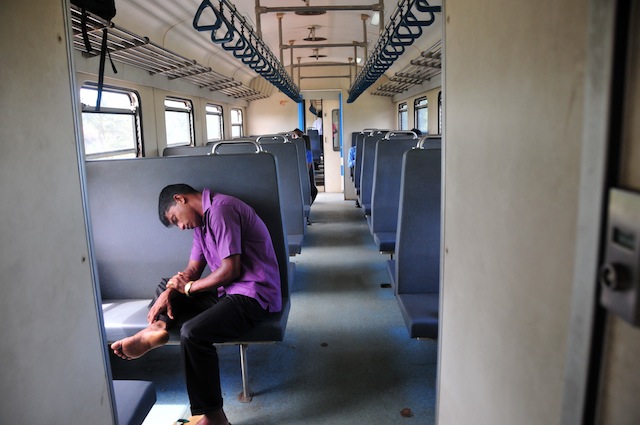 A man sleeps in a virtually empty train car as it travels between Kilinochchi and Pallai. The bulk of the passengers on this train, hailing from the capital Colombo, were returning military personnel. Credit: Amantha Perera/IPS

Part of the problem, passengers say, is that trains here don’t run as regularly as they do elsewhere in the country. In fact, the most frequent carriers on the northwestern line are former road buses that have been converted into rail-friendly vehicles that move in pairs along the track.

Despite their multi-million-dollar price tag, the new rail links are yet to provide the spark needed to jumpstart the Vanni economy, still in the doldrums despite five years of peace and a massive reconstruction effort in the Northern Province exceeding three billion dollars. 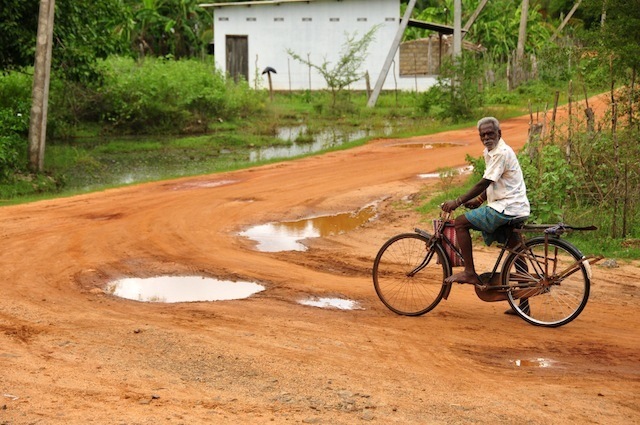 A man on a bicycle watches the Yal Devi pass by near the northern town of Kilinochchi. Despite mega development projects, poverty is still rampant in the region and the bicycle remains one of the main modes of transport. Credit: Amantha Perera/IPS

Poverty is rampant in the region. The poverty headcount in the Mullaitivu District is a national high of 28.8 percent, almost six times the national average of 6.7 percent and 20 times that of the 1.4 percent recorded in the Colombo District.

Other districts in the north are not faring much better: Kilinochchi has a poverty rate of 12.7 percent, Mannar 20.1 percent and Jaffna 8.3 percent.

Only Vavuniya, the southern-most of the five northern districts and the gateway to the rest of the country, is performing well, with a poverty ratio of 3.4 percent.

Unemployment rates follow a similar trend, with Kilinochchi recording a rate of 7.9 percent, nearly double the national average of 4.4 percent, while all districts other than Vavuniya recorded rates higher than the national benchmark.

The primary reason for this, experts say, has been slow job creation. Fishing and agriculture constitute the bulk of the Vanni’s economic activity, but policies aimed at creating markets and bringing in buyers are rare.

Private sector involvement, while on the rise, has not been able to breathe life into an economy repeatedly amputated by the conflict.

Economists blame  a lopsided policy framework, that has poured millions into large infrastructure development without paying adequate attention to revitalising local income generation, for the chronic poverty in the north on

Anushka Wijesinha, economist and policy advisor at the Colombo-based think-tank Institute of Policy Studies, told IPS that if transporting bulk cargo by rail is made cheaper, goods from the Vanni could achieve a more attractive price.

But for the northern railway to become a real purveyor of economic success, more attention, more incentives and more funds need to be directed to the medium- and small-scale Vanni entrepreneur.

“Policies that improve the business climate, access to finance, technology and business skills will be key,” Wijesinha concluded.

Economist Muttukrishna Sarvananthan, who specialises in the northern economy, told IPS that before the conflict erupted, the northern region brought in the highest per-region revenue to the Railways Department. This was likely due to the fact that the Northern Line was the longest in the country, with 83 station stops.

Sarvananthan, who heads the Point Pedro Institute of Development in Jaffna, emphasised that the government needs to come up with an integrated plan to capitalise on cheaper costs made possible by the railway.

“The Government should incentivise private businesses to set up warehouses adjoining the main railway stations in order to spur cargo trade via railroads,” he stated.

“The re-opening of the rail line to the Northern Province provides healthy competition to road transport services, both cargo and passenger, thereby reducing the transport costs to passengers and businesses alike.

“The resulting reduction in the transaction costs of businesses is likely to benefit consumers by the reduction in prices of consumer goods and services,” he concluded.

If no such integrated plans are made, a familiar refrain will echo in the Vanni, with a large infrastructure project leaving a poverty-stricken community in awe, but in reality no better off than they were before.