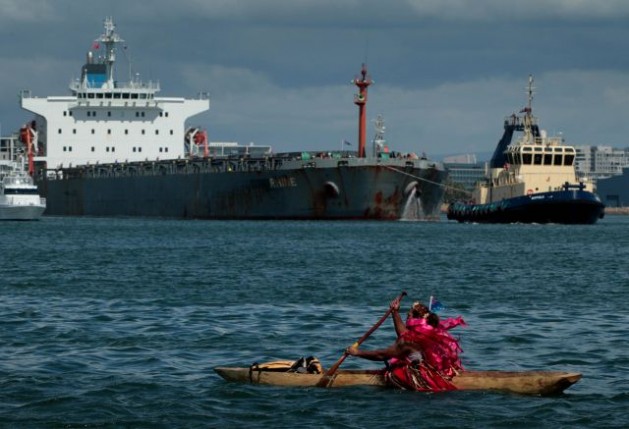 A Pacific Climate Change Warrior paddles into the path of a ship in the world’s biggest coal port to bring attention to the impact of climate change on low-lying islands. Courtesy of Dean Sewell/Oculi for 350.org

UNITED NATIONS, Oct 18 2014 (IPS) - Climate Change Warriors from 12 Pacific Island nations paddled canoes into the world’s largest coal port in Newcastle, Australia, Friday to bring attention to their grave fears about the consequences of climate change on their home countries.

The 30 warriors joined a flotilla of hundreds of Australians in kayaks and on surfboards to delay eight of the 12 ships scheduled to pass through the port during the nine-hour blockade, which was organised with support from the U.S.-based environmental group 350.org.

"Fifteen years ago, when I was going to school, you could walk in a straight line. Now you have to walk in a crooked line because the beach has eroded away." -- Mikaele Maiava

Mikaele Maiava spoke with IPS about why he and his fellow climate change warriors had travelled to Australia: “We want Australia to remember that they are a part of the Pacific. And as a part of the Pacific, we are a family, and having this family means we stay together. We cannot afford, one of the biggest sisters, really destroying everything for the family.

Speaking at the opening of a new coal mine on Oct. 13, Australian Prime Minister Tony Abbott said that “coal is good for humanity.”

Mikaele said that he and his fellow climate warriors were aware that their fight was not just for the Pacific, and that other developing countries were affected by climate change too. 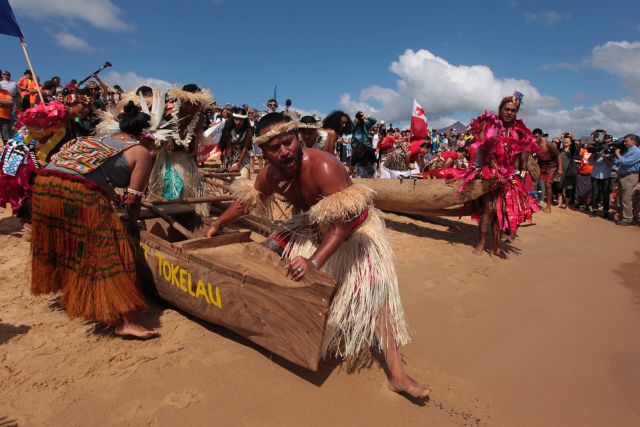 Mikaele described how his home of Tokelau was already seeing the effects of climate change,

“We see these changes of weather patterns and we also see that our food security is threatened. It’s hard for us to build a sustainable future if your soil is not that fertile and it does not grow your crops because of salt intrusion.”

Tokelau’s coastline is also beginning to erode. “We see our coastal lines changing. Fifteen years ago when I was going to school, you could walk in a straight line. Now you have to walk in a crooked line because the beach has eroded away.”

Mikaele said that he and his fellow climate change warriors would not be content unless they stood up for future generations, and did everything possible to change world leaders’ mentality about climate change.

“We are the generation of today, the leaders of tomorrow and we are not blinded by the problem. We can see it with our own eyes, we feel it in our own hearts, and we want the Australian government to realise that. We are not blinded by money we just want to live as peacefully and fight for what matters the most, which is our homes.”

Tokelau became the first country in the world to use 100 percent renewable energy when they switched to solar energy in 2012.

Speaking about the canoes that he and his fellow climate warriors had carved in their home countries and bought to Australia for the protest, he talked about how his family had used canoes for generations,

“Each extended family would have a canoe, and this canoe is the main tool that we used to be able to live, to go fishing, to get coconuts, to take family to the other islands.”

Another climate warrior, Kathy Jetnil-Kijiner, from the Marshall Islands, brought members of the United Nations General Assembly to tears last month with her impassioned poem written to her baby daughter Matafele Peinam,

“No one’s moving, no one’s losing their homeland, no one’s gonna become a climate change refugee. Or should I say, no one else. To the Carteret islanders of Papua New Guinea and to the Taro islanders of Fiji, I take this moment to apologise to you,” she said.

The Pacific Islands Forum describes climate change as the “single greatest threat to the livelihoods, security and well-being of the peoples of the Pacific.”

“Climate change is an immediate and serious threat to sustainable development and poverty eradication in many Pacific Island Countries, and for some their very survival. Yet these countries are amongst the least able to adapt and to respond; and the consequences they face, and already now bear, are significantly disproportionate to their collective miniscule contributions to global emissions,” it says.

Pacific Island leaders have recently stepped up their language, challenging the Australian government to stop delaying action on climate change.

Oxfam Australia’s climate change advocacy coordinator, Dr Simon Bradshaw, told IPS, “Australia is a Pacific country. In opting to dismantle its climate policies, disengage from international negotiations and forge ahead with the expansion of its fossil fuel industry, it is utterly at odds with the rest of the region.”

Dr. Bradshaw added, “Australia’s closest neighbours have consistently identified climate change as their greatest challenge and top priority. So it is inevitable that Australia’s recent actions will impact on its relationship with Pacific Islands.

“A recent poll commissioned by Oxfam showed that 60 percent of Australians thought climate change was having a negative impact on the ability of people in poorer countries to grow and access food, rising to 68 percent among 18 to 34-year-olds,” he said.