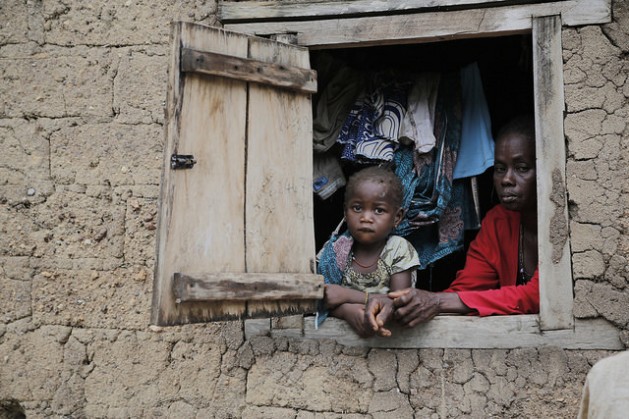 Children in the town of Gueckedou, the epicentre of the ebola outbreak in Guinea. Credit: ©afreecom/Idrissa Soumaré

WASHINGTON, Oct 17 2014 (IPS) - President Barack Obama is under significant pressure to impose a range of restrictions on travellers coming to the United States from West African countries affected by the current Ebola outbreak.

Yet public health experts and development advocates warn that such restrictions would harm the already reeling economies of Ebola-hit countries in the region, and squeeze the international community’s ability to get health workers and goods into these countries.

“If we get this wrong and just hunker down and hide, we will make this problem worse both in West Africa and in the United States.” -- Charles Kenny of the Center for Global Development

“An accelerated mobilisation of personnel and resources is necessary to control the Ebola epidemic in West Africa and care for patients, through the establishment of new Ebola management centres,” Tim Shenk, a press officer with Medecins Sans Frontieres, the humanitarian group that has been at the core of the international response to the epidemic, told IPS.

“For this reason, it is crucial that airlines continue flying to the affected region.”

Calls for halting flights and imposing visa restrictions have been floating around Washington since the virus’s spread caught the world’s attention over the summer. Yet these have strengthened substantially in recent days, following the confirmation of three cases of Ebola in the United States.

The first of those was unknowingly carried by a man from Liberia. He died last week after infecting two of the health workers attending to him, and the case has prompted an intense and at times vitriolic response.

“A temporary ban on travel to the United States from countries afflicted with the virus is something that the president should absolutely consider,” John Boehner, the leader of the U.S. House of Representatives and one of the most powerful figures in Washington, said Wednesday.

In fact there are no direct air connections between the United States and any of the three countries most affected by the current outbreak. Further, it would be extremely complex to impose such a ban in tertiary transit countries.

On the other hand, it would be possible to create additional hurdles for those applying for U.S. visas in West Africa. But this would do nothing to deal with, for instance, the many U.S. passport holders living in these countries, and would likewise be logistically complex.

Nonetheless, Boehner was echoing a clear tide of U.S. support for the imposition of travel restrictions. According to a poll released Tuesday, two-thirds of people in the United States would support “restricting entry” of incoming travellers from Ebola-afflicted countries.

The federal government’s response to Ebola has suddenly become a defining issue in the U.S. midterm elections, slated for next month.

The current Ebola outbreak has now killed more than 4,000 people, almost all in Guinea, Liberia and Sierra Leone. On Thursday, United Nations Secretary-General Ban Ki-moon urged the international community to make available a billion dollars to allow those combating the disease to meet a target of reducing the virus’s transmission rates by the beginning of December.

In the United States, meanwhile, the public support for travel restrictions has risen by six percentage points since just last week. And lawmakers, many of whom are currently in the last stages of political campaigns, are responding.

Though Congress is currently on recess, lawmakers held a rare hearing on Ebola Thursday. By Thursday evening, members of Congress who supported some sort of travel restrictions outnumbered those who didn’t by 56 to 13, according to a list compiled by a Washington newspaper.

While those who do not support a travel ban were all Democratic, the support for such restrictions stretches across both parties.

“I’ve been struck by just how intense this political pressure has become, and the pressure is bipartisan,” J. Stephen Morrison, the director of the Global Health Policy Center at the Center for Strategic and International Studies (CSIS), a Washington think tank, told IPS.

“While the arguments made against travel bans have been solid, they don’t win the day with the public. Further, if the base population carrying the virus continues to grow, the threat won’t ease and neither will this pressure.”

Even as lawmakers increasingly funnel – and perhaps fuel – concern over Ebola in this country, the Obama administration remains adamant that it is not considering any travel restrictions beyond health scans and interviews at international airports.

“Shutting down travel to that area of the world would prevent the expeditious flow of personnel and equipment into the region,” Josh Earnest, the White House press secretary, told journalists Wednesday. “And the only way for us to stop this outbreak and to eliminate any risk from Ebola to the American public is to stop this outbreak at the source.”

Earnest did not reject the possibility completely, however, noting that a travel ban is “not on the table at this point.”

Yet many of those closest to the Ebola response warn that travel restrictions would be not only unfeasible but outright dangerous, exacerbating the outbreak.

“You don’t want to do something that inadvertently accelerates the economic collapse of these countries or impedes the flow of health workers and critically needed commodities,” CSIS’s Morrison says. “Our ability to get ahead of this crisis necessitates the flow, back and forth, of thousands of health-care workers and commodities.”

Indeed, such concerns have already been borne out. African Union aid workers, for instance, were recently delayed for a week getting into Liberia due to travel restrictions imposed in a number of African countries.

“It has been quite challenging over the last several months, because there have been a reduction in commercial flights … a reduction in shipping that comes into the country,” Debra Malac, the U.S. ambassador to Liberia, told journalists Thursday. “[That’s made it] very difficult to get things like food as well as supplies in that are critically needed in order to help address this epidemic.”

U.S. travel restrictions could also pose significant economic risks, both to Ebola-hit countries and Africa as a whole.

“There’s a lot of air traffic between Africa and the U.S. that’s very important for trade and investment, the tourism industry, for the diaspora,” CSIS’s Morrison says. “All of that is reliant on air links, so how do you make sure you’re not kicking the pins out of those economic processes?”

Already there are widespread fears over the financial impacts of Ebola on Guinea, Liberia and Sierra Leone.

Earlier this week, the World Health Organisation warned that the virus now threatens “potential state failure” in these countries. Last week, the World Bank estimated that the epidemic could cost West African countries some 33 billion dollars in gross domestic product.

“If we get this wrong and just hunker down and hide, we will make this problem worse both in West Africa and in the United States,” Charles Kenny, a senior fellow at the Center for Global Development, a think tank here, told IPS.

“Imposing any kind of travel ban would tank the economy of these three countries, and that will have knock-on effects on dealing with the disease – increasing the suffering and the number of people with the disease.”