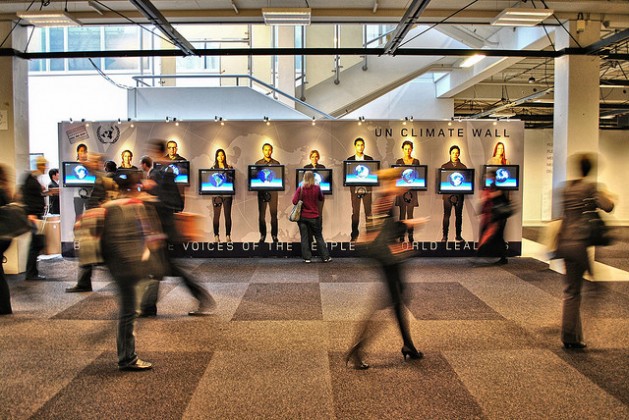 At the G20 summit in Australia, the United States pledged 3 billion dollars and Japan pledged 1.5 billion dollars to the Green Climate Fund (GCF), bringing total donations up to 7.5 billion so far. The GCF, established through the UN Framework Convention on Climate Change, will distribute money to support developing countries in mitigating and adapting to climate change.

"While the figures might sound big, they pale in comparison to the actual needs on the ground and to what developed countries spend in other areas – for instance, the U.S. spends tens of billions of dollars every year on fossil fuel subsidies.” -- Brandon Wu of ActionAid USA

The two surprising announcements “really send a strong signal that both developed and developing countries are serious about getting to an ambitious climate agreement in 2015,” said Alex Doukas, a climate finance expert at the World Resources Institute, a Washington, DC think tank.

The GCF aims to be the central hub for international climate finance in the coming years. At an October meeting in Barbados, the basic practices of the GCF were firmly established and it was opened to funding contributions.

The 7.5 billion dollars that have been committed by 13 countries to the GCF bring it three quarters of the way to its initial 10-billion-dollar goal, to be distributed over the next few years. The gap may be closed on Nov. 20 at a pledging conference in Berlin. Several more countries are expected to announce their contributions, including the United Kingdom and Canada.

The decision-making board of the GCF is split evenly between developed and developing country constituencies.

“For a major, multilateral climate fund, I would say that the governance is much more balanced than previously,” Doukas said. “That’s one of the reasons for the creation of the Green Climate Fund, especially from the perspective of developing countries.”

As IPS has previously noted, the redistributive nature of the GCF acknowledges that the developing countries least responsible for climate change will often face the most severe consequences.

Advocates hope that the United States’ and Japan’s recent contributions will pave the way for more pledges on November 20th and a more robust climate finance system in general.

According to Jan Kowalzig, a climate finance expert at Oxfam Germany, the unofficial 10-billion-dollar goal for the GCF was set by developed countries, but developing countries have asked for at least 15 billion dollars.

The 10-billion-dollar goal is “an absolute minimum floor for what is needed in this initial phase,” he told IPS.

Brandon Wu, a senior policy analyst at ActionAid USA and one of two civil society representatives on the GCF Board, asserts that the climate finance efforts will soon need to be scaled up drastically.

“While the figures might sound big, they pale in comparison to the actual needs on the ground and to what developed countries spend in other areas – for instance, the US spends tens of billions of dollars every year on fossil fuel subsidies,” he told IPS.

The GCF may run into problems if countries attach caveats to their contributions, specifying exactly what types of activities they can be used for.

“Such strings are highly problematic as they run against the consensual spirit of the GCF board operations,” Kowalzig said.

He also warned that some of the contributions may come in the form of loans which need to be paid back instead of from grants.

After the pledging phase, much work remains to be done to establish a global climate finance roadmap towards 2020.

“The Green Climate Fund can and should play a major role,” Kowalzig said, “but the pledges, as important and welcome as they are, are only one component of what developed countries have promised to deliver.”

The other major development of the past week, Obama and Xi’s carbon emissions reduction announcement, also deserves both praise and scrutiny.

In an op-ed in the New York Times, U.S. Secretary of State John Kerry made clear the historic nature of the agreement.

“Two countries regarded for 20 years as the leaders of opposing camps in climate negotiations have come together to find common ground, determined to make lasting progress on an unprecedented global challenge,” he wrote.

While Barack Obama may be committed to cutting greenhouse gas emissions, Congress has expressed reservations. Mitch McConnell, soon to be the Senate majority leader, has called the plan “unrealistic” and complained that it would increase electricity prices and eliminate jobs.

On the Chinese side, Xi’s willingness to act on climate change and peak carbon emissions by 2030 was a substantial transformation from only a few years ago.

Andrew Steer, president and CEO of the World Resources Institute, said in a press release that China’s announcement was “a major development,” but noted that a few years difference in when peak emissions occur could have a huge impact on climate change.

“Analysis shows that China’s emissions should peak before 2030 to limit the worst consequences of climate change,” he said.

Researchers have said that China’s emissions would have peaked in the 2030s anyway, and that a more ambitious goal of 2025 could have been possible.

Still, the agreement indicates a new willingness of the world’s number one and number two biggest carbon emitters to work together constructively, and raises hopes for successful negotiations in December’s COP20 climate change conference in Lima, Peru.

Héla Cheikhrouhou, executive director of the GCF, was unapologetically enthusiastic about the new momentum built in recent days.

“This week’s announcements will be a legacy of U.S. President Obama,” she announced. “It will be seen by generations to come as the game-changing moment that started a scaling-up of global action on climate change, and that enabled the global agreement.”