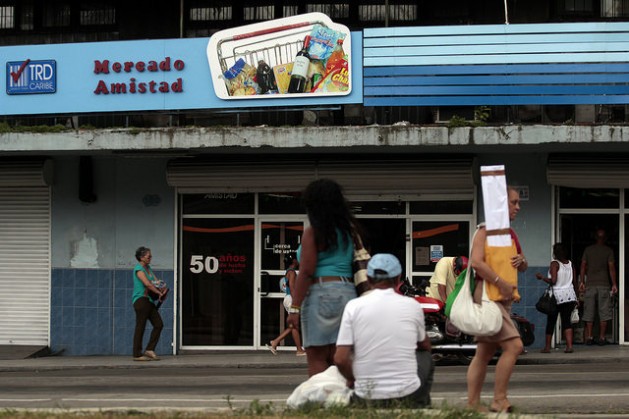 HAVANA, Dec 16 2014 (IPS) - One of the major challenges assumed by President Raúl Castro when he launched a series of reforms in Cuba is improving living standards in a country still suffering from a recession that began over 20 years ago and has undermined the aim of achieving economic and social equality.

Inequality has been growing since the start of the crisis triggered by the break-up of the Soviet Union and East European socialist bloc – Cuba’s main trade and aid partners – in the early 1990s. The “special period” – the euphemistic term used to refer to the lengthy recession – “has even morally affected the concept of inequality,” economist Esteban Morales told IPS.

To ease the recession in the 1990s, the government of Fidel Castro (1959-2008) opened the doors to foreign investment, fomented tourism, legalised the dollar, and created the “foreign currency recovery stores”, among other measures whose economic benefits also came accompanied by greater social inequality.

: “What is annoying is that people with less education and fewer responsibilities earn more than a professional. When I started studying in the 1980s that’s not how things were. People’s salaries stretched much farther.” -- Cuban schoolteacher

However, María Caridad González appreciates the sense of equality that still exists in Cuban society, which she says has made social inclusion possible for her 10-year-old son, who knows that “to do well in life he just has to study and become a professional.”

Since the 1959 revolution, free universal healthcare coverage and education have been important tools for achieving social equality in Cuba.

González, who comes from a family of small farmers, moved to Havana in the mid-1990s. “It was hard at first. There were shortages of everything, but I stayed anyway and got married here. Now there are a lot of stores and farmers’ markets, and what is lacking is money to buy things,” said the 36-year-old, who works in the cleaning service at a company that is partly foreign owned.

Other people are worse off than González, who manages to add to her monthly income working as a domestic in the homes of families she knows, which brings her another 80 CUC – the Cuban peso convertible to dollars – or 1,920 pesos.

That is more than four times the average public sector salary of 470 pesos (19 dollars) a month. “Thanks to my income we survived the months when my husband, who is a cook in the tourism industry, was out of work,” said González.

She is in a much better position than her neighbor, a 55-year-old primary schoolteacher who earns 750 pesos a month and has no source of dollars or other foreign currency – a mainstay for many Cuban families, who receive remittances from relatives abroad or who work in tourism, where they earn tips.

The teacher, who is married and has two adult children aged 20 and 25, told IPS: “What is annoying is that people with less education and fewer responsibilities earn more than a professional. When I started studying in the 1980s that’s not how things were. People’s salaries stretched much farther.”

The inequality gap has widened as the differences in incomes have grown.

Those who only earn a public salary – the state is still by far the biggest employer, despite a reduction in the public payroll as part of the reforms – or who depend on a pension or are on social assistance find it impossible to meet their basic needs. According to statistics from the Centre for Studies of the Cuban Economy, food absorbs between 59 and 75 percent of the family budget in Cuba. However, Cuba’s free universal healthcare and education, social security system, and social assistance for the poor have been preserved in spite of the country’s economic troubles, and were key to Cuba’s ranking in 44th place on the United Nations Development Programme’s (UNDP) Human Development Index (HDI) this year.

The HDI is a composite index that measures average achievement in three basic dimensions of human development: long and healthy life, knowledge and a decent standard of living.

The schoolteacher, who asked to remain anonymous, said “I understand and appreciate that, but it is no less true that the differences in income differentiate us when it comes to putting food on the table or buying clothes.”

Morales agrees with the government’s aim of “equal rights and opportunities” rather than egalitarianism. In his view, the distribution of income based on work is still unequal. “It would be ethical if people received in accordance with what they contributed, and those who needed assistance would receive it through social spending, to balance out the inequalities,” he argued.

The academic defends the idea of subsidising specific people rather than products, which is still being done through the ration card system that distributes a certain quantity of foodstuffs at prices subsidised by the state, to all citizens, regardless of their income.

The system covered the basic dietary needs of families until the 1980s. But that is no longer the case, and Cubans now have to complete their diet with products sold in the hard currency stores and the farmers’ markets, where one pound (450 grams) of pork can cost 40 pesos (1.60 dollars) – the same price fetched by a pound of onions at certain times of the year.

In its 2014-2020 pastoral plan, the Catholic Church complains that broad swathes of society are plagued by “material poverty, the result of wages that are too low to provide a family with decent living standards.”

That situation, it says, impacts semi-skilled workers as well as professionals.

After acknowledging that the expansion of opportunities for self-employment and for setting up cooperatives in non-agricultural sectors of the economy has opened up opportunities for some, the church warns that the current economic reforms “have failed to reactivate the economy in such a way that it benefits the entire population.”

Not all segments of society are in equal conditions to take advantage of the changes that have been ushered in. Researchers like Morales or Mayra Espina say women, people who are not white, and young people are at a disadvantage, whether due to a lack of formal training and education, or of assets and resources for starting up their own businesses.

According to the last official statistics on poverty published in Cuba, from 2004, 20 percent of the urban population was poor. In this Caribbean island nation, 76 percent of the population of 11.2 million lives in towns and cities. Experts worry that the proportion today is even higher, and they say decision-makers need to know the exact percentage in order to properly tailor social policies to the actual situation.

But Espina and other academics say the reforms approved in April 2011 do not put a high enough priority on social aspects, ignore the questions of poverty and inequality, and contain weak measures for guaranteeing equality.