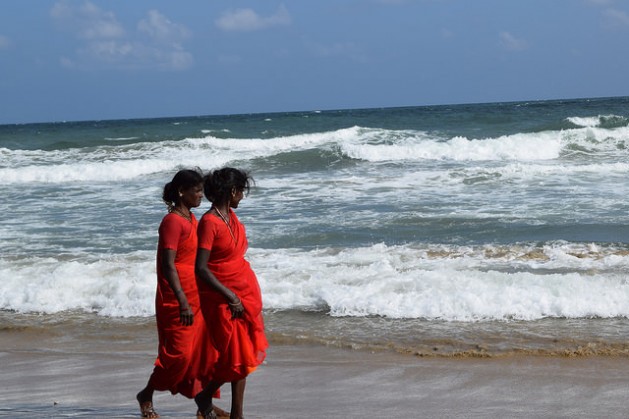 Two fisherwomen walk along the seashore in Nemmeli. The village that saw widespread destruction in the 2004 tsunami and several cyclones since now has a unique community college where locals can learn disaster management. Half the students are women. Credit: Stella Paul/IPS

It was a sleepy Sunday morning when Raja, then a student, saw a wall of seawater moving forward, in seeming slow motion. Terrified, he broke into a run towards the two-storey cyclone shelter that stood at the rear of his village, along an interstate highway.

“This is what being a climate refugee is like.” -- Founder of the "Cyclone College", Ramaswamy Krishnamurthy

Once there, the teenager watched in utter bewilderment as the wall of water hammered his village flat.

“I didn’t know what was happening, why the sea was acting like that,” Raja recalls.

Later, he heard that the seabed had been shaken by an earthquake, triggering a tsunami. It was a new word for Nemmeli, a village of 4,360 people. The tsunami destroyed all the houses that stood by the shore, 141 in Raja’s neighbourhood alone.

A decade later, the cyclone shelter that once saved the lives of Raghu Raja and his fellow villagers is a college that teaches them, among other things,  about natural disasters like tsunamis and how best to survive them.

The state-funded college was established in 2011. One of its primary goals was to build disaster resilience among communities in the vulnerable coastal villages. Affiliated with the University of Madras, the college offers undergraduate degrees in commerce and sciences, including disaster management and disaster risk reduction.

Today a married father of two, Raja, whose education ended after 10th grade, dreams that one day his children will attend this college.

Understanding the dangers that surround them

While Raghu Raja’s dream will take some time to come true, his fellow fisherman Varadaraj Madhavan is already there: two of his three children have attended the “cyclone college”.

His 22-year-old daughter Vijaya Lakshmi has already graduated from the college – the first graduate in Madhavan’s entire clan – and 18-year-old son Dilli Ganesh is expected to follow suit next year.

During her three years of college, Laxmi studied English, Computer Applications and Disaster Management. Among her greatest achievements as a student has been creating a “Hazard Map” of her village. The map, prepared after an extensive study of the village, its shoreline and soil structure, shows the level of vulnerability the village faces.

“This is a real time status,” says Ignatius Prabhakar of SEEDS India, an NGO that trains vulnerable communities in disaster preparedness. “There are different colours indicating different types of sea storms and the levels of threats they pose. The map, meant to be updated every three months, is for the villagers to understand these threats and be prepared.”

There are seven neighbourhoods in Nemmeli and a copy of the hazard map stands at the entrance of each of them. Laxmi, who worked alongside a team of engineering students from Chennai on the mapping project, describes is as a great learning experience.

“I learnt a lot of our village, the environment here. For example, I learnt how disappearance of sand dunes, overfishing and garbage disposal can increase the threats of flooding. I also learnt where everyone should go in time of a disaster and how exactly we should evacuate,” she says.

The young woman is now also a member of the Village Residents Alliance for Disaster Risk Reduction – a community group that actively promotes disaster preparedness.

From cyclone shelter to learning hub

Though highly popular now, it was an uphill task to set up the college, recalls Ramaswamy Krishnamurthy, a professor at the University of Madras and the founder of the college.

To begin with, the state government had asked the college to be operational from the year 2011. It was summer already, but there were no buildings to hold the classes in and no land allocated yet to build one. After several rounds of intense lobbying of local government officials, Krishnamurthy was offered the cyclone shelter to run the college.

The next big step was to convince the villagers to send their children to the college.

“We hired an auto-rickshaw (tuk tuk) and fixed a loudspeaker on top on it. My assistant would drive the vehicle around the neighbourhood all day, calling on the villagers to send their children to the college. I would wait right here, under a tree, waiting for a parent to turn up,” says Krishnamurthy, says who was the principal until recently and is credited for the college’s current popularity and its successful disaster risk reduction programme.

In the first year of the college, 60 students enrolled. After four years, the number has gone up to 411 and half of them are women, says Krishnamurthy.

Sukanya Manikyam, 23, who recently graduated, was one of the first students to enroll. She is now planning to join a post-graduate course. “I would like to teach at a university one day,” she says.

According to Krishnamurthy, since the tsunami, the rate of erosion along the shore has been visibly increasing. The topography of the sea bed has changed, the sand dunes are disappearing and houses are caving in, slowly rendering the villagers homeless and causing internal displacement.

“This is what being a climate refugee is like,” says Krishnamurthy.

As the danger of displacement from the advancing sea grows greater, so does this fishing community’s need for alternative livelihoods. The ‘cyclone college’ is catering to this need, providing knowledge and information that can help residents find new jobs and build new lives.

Tilak Mani, a 60-year-old villager, is optimistic about the future. “Ten years ago, the tsunami had left all of us in tears. Today, our children have the skills to steer us towards safety in such a disaster.”