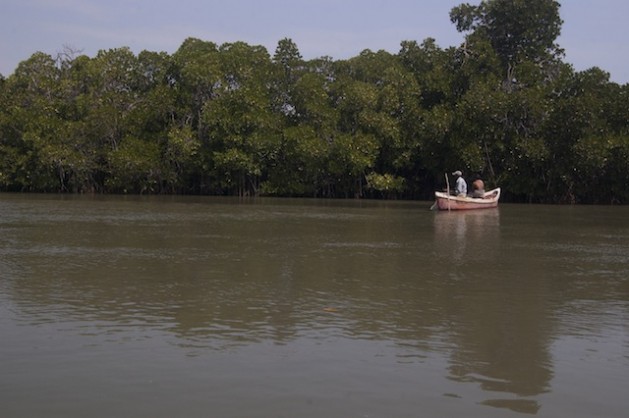 An Irula couple fishes in the creeks of the Pichavaram Mangrove Forest in Tamil Nadu. Credit: Malini Shankar/IPS

PICHAVARAM, India, Nov 13 2014 (IPS) - When the Asian tsunami washed over several Indian Ocean Rim countries on Boxing Day 2004, it left a trail of destruction in its wake, including a death toll that touched 230,000.

Millions lost their jobs, food security and traditional livelihoods and many have spent the last decade trying to pick up the pieces of their lives. But for a small tribe in southern India, the tsunami didn’t bring devastation; instead, it brought hope.

Numbering some 25,000 people, the Irulas have long inhabited the Nilgiri Mountains in the states of Tamil Nadu and Kerala, and have traditionally earned a living by ridding the farmland of rats and snakes, often supplementing their meagre income by working as daily wage agricultural labourers in the fields.

“If we were not included in the [Scheduled Tribes] List we would never have benefited from [development] schemes. We would have remained hunter-gatherers, eating rats and hunting snakes." -- Nagamuthu, an Irula tribesman and tsunami survivors
Now, on the eve of the 10-year anniversary of the tsunami, the Irulas in Tamil Nadu are a living example of how sustainable disaster management can alleviate poverty, while simultaneously preserving an ancient way of life.

Prior to 2004, the Irula people laboured under extremely exploitative conditions, earning no more than 3,000 rupees (about 50 dollars) each month. Nutrition levels were poor, and the community suffered from inadequate housing and sanitation facilities.

But when the giant waves receded and NGOs and aid workers flocked to India’s southern coast to rebuild the flattened, sodden landscape, the Irulas received more than just a hand-out.

They were finally included on the government’s List of Scheduled Tribes, largely thanks to the efforts of a government official named G.S. Bedi from the tsunami-ravaged coastal district of Cuddalore in Tamil Nadu.

Inclusion on the list enabled the community to become legal beneficiaries of state-sponsored developmental schemes like the Forest Rights Act and other sustainable fisheries initiatives, thereby improving their access to better housing, and bringing greater food and livelihood security.

More importantly, community members say, the post-tsunami period has marked a kind of revival among Irulas, who are availing themselves of sustainable livelihood schemes to conserve their environment while also increasing their wages.

Under the aegis of the M S Swaminathan Research Foundation (MSSRF), Irulas are now part of a major livelihood scheme that has boosted monthly earnings seven-fold, to roughly 21,000 rupees or about 350 dollars in the Pichavaram Mangrove Forest of Tamil Nadu where their traditional homes are located.

Some 180 Irula families are directly benefitting from training programmes and subsidies granted to their tribal cooperatives, also known as self-help groups.

Members of the tribe are sharpening their skills at fishing, sustainable aquaculture and crab fattening, gradually moving further and further away from a life of veritable servitude to big landowners.

Perhaps most importantly, Irulas are incorporating mangrove protection and conservation into their daily lives, a step they see as necessary to the long-term survival of the entire community.

Indeed, it was the Pichavaram Mangrove Forest, located close to the town of Chidambaram in Tamil Nadu, that spared the community massive loss of life during the tsunami, protecting some 4,500 Irulas, or 900 families, from the full impact of the waves.

Snuggled between the Vellar estuary in the north and Coleroon estuary in the south, the Pichavaram forest spans some 1,100 hectares, its complex root system and inter-tidal ecosystem offering a sturdy barrier against seawater intrusion, waves and flooding.

According to statistics provided by Dr. Sivakumar, a marine biologist with the MSSRF in Chennai, the unlucky few who perished in the tsunami were those who were caught outside of the ecosystem’s protective embrace – some seven people from the Kannagi Nagar and Pillumedu villages, as well as 64 people who were stranded on the MGR Thittu, both located on sandbars devoid of mangroves.

The experience opened many tribal members’ eyes to the inestimable value of mangroves and their own vulnerability to the vagaries of the sea, sparking a grassroots-level conservation effort under the provisions of India’s Forest Rights Act.

“Until we were enlisted in the Scheduled Tribes List we did not know our rights, we were neither successful as hunter-gatherers nor as daily wage agricultural labourers,” says 55-year-old Pichakanna, an Irula tribal man who has happily exchanged agricultural employment for fishing and aquaculture activities that allow him to participate in mangrove conservation efforts in Tamil Nadu.

His salary now comes from prawn farming in the biodiverse mangrove forests, he tells IPS.

Dr. M. S. Swaminathan, chairman of the MSSRF, believes that “by conserving mangrove forests [we are] protecting the most productive coastal ecosystem that guarantees […] livelihood and ecological security.

“Bioshields are an indispensable part of Disaster Risk Resilience,” he adds.

This union between job creation and disaster management has been a stroke of unprecedented good fortune for the Irula people.

Thirty-three-year-old Nagamuthu, an Irula member whose parents – hailing from the Pichavaram forests – survived the tsunami, tells IPS, “If we were not included in the [Scheduled Tribes] List we would never have benefited from [development] schemes. We would have remained hunter-gatherers, eating rats and hunting snakes.

“Now we have developed a mangrove plantation on forest land granted to us by the government, and the Forest Rights Act has also given us fishing rights in the Protected Area of the Pichavaram Mangroves.”

Such developments are crucial at a time when mangroves are disappearing fast. According to a new study by the United Nations Environment Programme (UNEP), “mangroves are being destroyed at a rate three to five times greater than the average rates of forest loss.”

By 2050, South Asia could lose as much as 35 percent of its mangroves that existed in 2000. Emissions resulting from such losses make up about a fifth of deforestation-related global carbon emissions, the report says.

Irulas now harvest minor forest produce from the rich waters around the mangroves, such as clusters of natural pearl oysters, which are very high in protein, for their own consumption.

“We have also learnt the skill of crab trapping, and we have installed crab fattening devices close to our homes deep in the mangrove creeks,” Nagamuthu tells IPS. “This has helped us carve out a sustainable livelihood.”

Tribe members have also been taught to dig canals in the eco-friendly ‘fish bone’ pattern that helps bring tidal creeks directly to their doorstep, where they can catch fresh fish for breakfast.

This, in turn, has improved livelihood security. Coupled with the acquisition of new and improved equipment – such as nets, boats, oars, engines, hooks and traps – many fisher families have completely turned their lives around.

Residents of villagers such as Killai, Pillumedu, Kannaginagar, Kalaingar, Vadakku, T.S. Pettai, and Pichavaram have now created a community fund that gathers 30 percent of each families’ monthly income; the savings have been used to construct a village temple, a school and drinking water facilities for 900 families from some seven villages.

Pichakanna, who is now the village elder for the newly established MGR Nagar Township, tells IPS proudly that the community fund has also helped establish an ‘early warning helpline’, which uses voice SMS technology to inform fisherfolk about wave height and wind direction, as well as provide six-hourly weather forecasts and early warnings of approaching cyclones.

A voice SMS broadcast aimed at women also passes on information about health and hygiene, maternity benefits and minimum wages.

While heads of states and development experts fly around the world to discuss the post-2015 ‘sustainable development’ agenda, here in Pichavaram, a forgotten tribe is already practicing a new way of life – and they are pointing the way forward to a sustainable future.