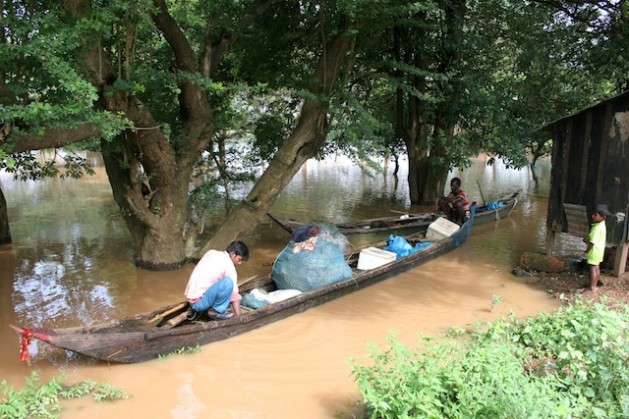 The loss of mangroves affects the poorest among India’s coastal population. These traditional fishermen steer their boat and belongings to safer areas after the 2013 Cyclone Phailin brought heavy floods in it wake. Credit: Manipadma Jena/IPS

ATHENS, Oct 15 2014 (IPS) - As the cyclonic storm Hudhud ripped through India’s eastern state of Andhra Pradesh, home to two million people, at a land speed of over 190 kilometres per hour on Sunday, it destroyed electricity and telephone infrastructure, damaged the airport, and laid waste to thousands of thatched houses, as well as rice fields, banana plantations and sugarcane crops throughout the state.

It is typhoon season here in Asia.

In Japan, still reeling from the impact of Typhoon Phanfone, Typhoon Vongfong brought another round of torrential rainfall and vicious winds this past weekend, continuing into Monday, and adding to the long list of damages that countries in this part of the world are now calculating.

In India alone, the government has pledged 163 million dollars in disaster relief, but officials say even this tidy sum may not be sufficient to get the state back on its feet. And for the families of the 24 deceased in Andhra Pradesh and and the eastern state of Odissa, no amount of money can compensate for their loss.

"If all the carbon stock held by mangroves were to be released into the atmosphere as CO2, the resulting emissions would be the equivalent of travelling 26 million km by car, 650 times around the world." -- United Nations Environment Programme (UNEP)
The ongoing calamity stirs memories of the deadly Typhoon Haiyan that claimed 6,000 lives in the Philippines almost exactly a year ago.

While these tropical storms cannot be stopped in their tracks, there is a natural defense system against their more savage impacts: mangroves. And experts fear their tremendous value is being woefully under-appreciated, to tragic effect, all around the world.

For those currently gathered in Pyeongchang, South Korea, for the 12th Conference of the Parties to the Convention on Biological Diversity (COP 12), this very issue has been a topic of discussion, as delegates assess progress on the Strategic Plan for Biodiversity 2011-2020, and its 20 Aichi Targets, agreed upon at a meeting in Nagoya, Japan, three years ago.

One of the goals accepted by the international community was to improve and restore resilience of ecosystems important for adaptation to and mitigation of climate change. On this front, according to the recently released Global Biodiversity Outlook 4 (GBO-4), efforts have been lacking, with “trends […] moving in the wrong direction”, and the state of marine ecosystems falling “far short of their potential to provide for human needs through a wide variety of services including food provision, recreation, coastal protection and carbon storage.”

Nowhere is this more visible than in the preservation of mangrove forests, with a single hectare storing up to 1,000 tonnes of carbon on average, the highest per unit of area of any land or marine ecosystem, according to the U.N. Environment Programme (UNEP).

Their ability to store vast stocks of CO2 makes mangroves a crucial component of national and global efforts to combat climate change and protect against climate-induced disasters. Yet, experts say, they are not getting the attention and care they deserve.

Mangroves, a generic term for trees and shrubs of varying heights that thrive in saline coastal sediment habitats, are found in 123 countries and cover 152,000 square kilometers the world over.

Over 100 million people live within 10 km of large mangrove forests, benefiting from a variety of goods and services such as fisheries and forest products, clean water and protection against erosion and extreme weather events.

Mangroves provide ecosystem services worth 33,000 to 57,000 dollars per hectare per year, says a UNEP study entitled ‘The Importance of Mangroves: A Call to Action’ launched recently at the 16th Global Meeting of the Regional Seas Conventions and Actions Plans (RSCAP) held in Athens from Sep. 29-Oct. 1.

The report found that mangroves “are being destroyed at a rate three to five times greater than the average rates of forest loss”. Emissions resulting from such losses make up approximately a fifth of deforestation-related global carbon emissions, the report added, causing economic losses of between six and 42 billion dollars per year.

Besides human activity, climate change poses a serious threat to these complex ecosystems, with predicted losses of mangrove forests of between 10 and 20 percent by 2100, according to the UNEP.

The situation is particularly grave in South Asia, which by 2050 could lose 35 percent of the mangroves that existed in 2000. In the period running from 2000-2050, ecosystem service losses from the destruction of mangroves will average two billion dollars a year.

With their complex root system acting as a kind of natural wall against storm surges, seawater intrusion, floods and typhoons, mangroves act as a buffer for vulnerable communities, and also guard against excessive damage caused by natural disasters.

This time last year, for instance, Cyclone Phailin – one of the strongest tropical storms ever to make landfall in India – damaged 364,000 houses, affected eight million people and killed 53.

In October 1999, the devastating Odisha Cyclone touched landfall wind speeds of 260 kilometer per hour, and took the lives of no fewer than 8,500 people, while wrecking two million homes and leaving behind damages to the tune of two billion dollars according to official figures.

A mangrove impact study conducted in the aftermath of this storm, the strongest ever recorded in the Indian Ocean, found that the village to incur the lowest loss per household was protected by mangroves.

Scientists have found that mangroves can reduce wave height and energy by 13 to 66 percent, and surges by 50 cm for every kilometre, as they pass through the trees and exposed roots.

Speaking to IPS on the sidelines of the recently concluded RSCAP meeting, Jacqueline Alder, head of the freshwater and marine ecosystems branch at the UNEP’s Division of Environmental Policy Implementation, explained that a recent cost-benefit analysis in the South Pacific Island state of Fiji found a much higher financial success rate for planting mangroves than building a six-foot-high seawall.

Having worked in countries with high mangrove cover – from India and the Philippines, to Indonesia and Papua New Guinea – Alder believes that “many policy makers are not aware of mangroves’ multiple benefits. They better understand the commercial value of timber from traditional forests, and hence accord it more importance.”

“Regenerating a hectare of mangroves costs a high 7,500 dollars and is a dicey undertaking,” Jagannath Chatterjee of the Regional Centre for Development Cooperation (RCDC), currently working closely with coastal communities to regenerate mangroves in Odisha, one of India’s most cyclone-prone states, told IPS.

He blamed the destruction of the remaining mangrove forests on the “timber mafia”, alleging that cash crops are being planted in mangrove land.

With global warming rising at an alarming rate, the importance of mangroves in climate regulation cannot be ignored much longer.

If all the carbon stock held by mangroves were to be released into the atmosphere as CO2, the resulting emissions would be the equivalent of travelling 26 million km by car, 650 times around the world, according to calculations by the UNEP.