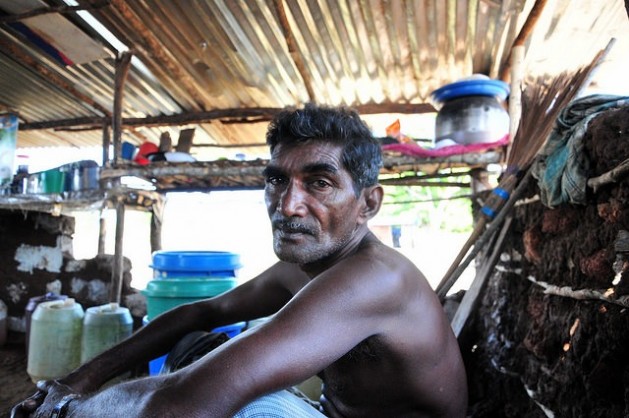 COLOMBO, Jan 9 2015 (IPS) - When the initial results started trickling in a little after midnight on Jan. 9, it still wasn’t clear exactly which way the country would swing: had Sri Lanka’s 15 million eligible voters thrown in their lot with incumbent President Mahinda Rajapaksa for a third term? Or would the desire for change put common opposition candidate Maithripala Sirisena at the helm?

It seemed close at first, with the bulk of the Sinhalase masses in the southern and central districts of Hambantota and Ratnapura polling in favour of Rajapaksa and his United People’s Freedom Alliance (UPFA).

But when newscasters began reading out the final tally of votes from the Tamil and Muslim-majority Northern and Eastern Provinces, it became clear that this was no repeat of the 2010 presidential race.

“This year the Tamil people seemed to have taken an oath for change." -- Dr. Jeyasingham, a senior lecturer at the Eastern University of Sri Lanka in Batticaloa
Symbolised by a swan, the ‘rainbow coalition’ National Democratic Front (NDF) swept the 12 electoral divisions in the northern Jaffna district with 253,574 votes, roughly 74.42 percent of the largely Tamil electorate.

The Tamil-majority northern Vanni district saw a landslide win for the NDF, with majority votes in the Mannar, Mullaitivu and Vavuniya polling divisions bringing in 78.47 percent of that region’s total ballots, while the eastern Batticaloa district also voted overwhelmingly in favour of the opposition, bringing Sirisena 81.62 percent of the total.

By six a.m., as daylight crept over the island, longtime President Rajapaksa had accepted defeat, and the new leader was making plans for a swearing-in ceremony at the Independence Square in Colombo.

Despite both candidates hailing from rural Sinhala communities and campaigning largely on a platform of promises to the Sinhala masses, experts say it was the minorities who decided this election.

“This year the Tamil people seemed to have taken an oath for change,” said Dr. Jeyasingham, a senior lecturer at the Eastern University of Sri Lanka in Batticaloa. “People in the North and East voted early – always a sign that change is in the air.

“Today, one thing is clear,” he told IPS, “and that is: minority votes decided this president. Tamils and Muslims [who account for 15 and nine percent of the population, respectively] are an important part of this democratic system and they had enough grievances to vote against the existing government.”

Few could predict with certainty the outcome of the polls.

Since coming to power in 2005, Rajapaksa has enjoyed widespread popular support, bolstered by his decisive defeat of the separatist Liberation Tigers of Tamil Eelam (LTTE) in May 2009, which brought an end to Sri Lanka’s 26-year-long civil conflict.

Riding on the war victory, Rajapaksa proceeded to consolidate his position by appointing his flesh and blood to prominent political posts. His three brothers serve, respectively, as the minister of economic development, the defence secretary and the speaker of parliament.

He also embarked on ambitious infrastructure projects, including the construction of major highways and reconstruction of the rail-line linking southern Sri Lanka with the north.

Still, experts say he neglected crucial issues, including delivering on promises to the minority Tamil population to allow them greater political autonomy, initiating a meaningful reconciliation process in the aftermath of the bloody conflict, and ensuring the independence of democratic institutions such as parliament and the judiciary.

Faced with a surprise challenger in the form of his one-time health minister and party secretary Sirisena, Rajapaksa fell back on his post-war rhetoric, ‘defeating terrorism’ in Sri Lanka being the regime’s greatest claim to fame.

Unfortunately for him, the public did not bite. Ironically, the lack of efforts to reconcile with the people of the north and east – who bore the brunt of the final stages of the war for which both the government and the LTTE stand accused of war crimes – proved to be the nail in his coffin.

“They engaged in land grabs [in the North], got the army involved in the economy, from buying and selling vegetables to running hotels, [and] engaged in human rights violations, in which they were getting away with impunity.”

Grassroots activists on the ground in the North and East have long called attention to wounds left untreated for too long. Many thousands still live with trauma, while others say there was never formal recognition of civilians’ suffering in a battle that claimed between 8,000 and 40,000 lives.

“[People in the North] were not even allowed to mourn their kith and kin,” Jeyasingham asserted. “Burial grounds were demolished. These are all things people have been keeping inside but they couldn’t raise their voices because of state oppression.”

And while press releases boasted of rapid rehabilitation and development in the former war zone, the majority of residents here struggled to find three square meals a day. Unemployment in the Northern Province stands at 5.2 percent, with the Kilinochchi District boasting the highest unemployment rate in the island, at 7.9 percent.

Poverty is also widespread, with government data pointing to a 28.8-percent poverty headcount in the Mullaitivu District, six times the national rate of 6.7 percent. In Mannar, the poverty rate is 20.1 percent, while Jaffna and Kilinochchi each nurse poverty headcounts of 8.3 percent and 12.7 percent, respectively.

“Even government servants struggle to survive on a 30-day basic salary,” Jeyasingham said. “This was clear from the postal votes in the North – it appears almost all public servants had voted against the government.”

Seen against this backdrop, many felt that Rajapaksa’s pre-election appeal to Tamil voters in the North to choose “the known devil” over the “unknown angel” to be in poor taste.

In Muslim-majority areas, too, it was plain where minorities stood.

A spate of violent attacks against Muslim communities in the last year – including a deadly riot in the southern town of Aluthgama that left eight people dead, 80 injured, and several shops in smoldering ruins after being torched by Sinhalese mobs – had many fearing for the future of religious and ethnic plurality in the country.

Public sentiment soured further at what many perceived to be indifference on the part of the government to attacks on Muslim shops and businesses, while tolerance towards the hard-line Buddhist monk-led Bodu Bala Sena (Buddhist Task Force, or BBS), widely believed to be instigators of the inter-religious tensions, pushed many Muslim communities away from the Rajapaksa regime.

It is yet to be seen how the new president will do justice to the huge voter turnout in the North and East. Sirisena’s 100-day work programme promises equality and an end to religious intolerance, Saravanamuttu said, but some political observers fear he may renege on these pledges in favour of placating the Sinhala vote-base.

As for the minorities, they have put their shoulders to the wheel of democracy and forced open the space to air their grievances. They can only hope they will be heard.