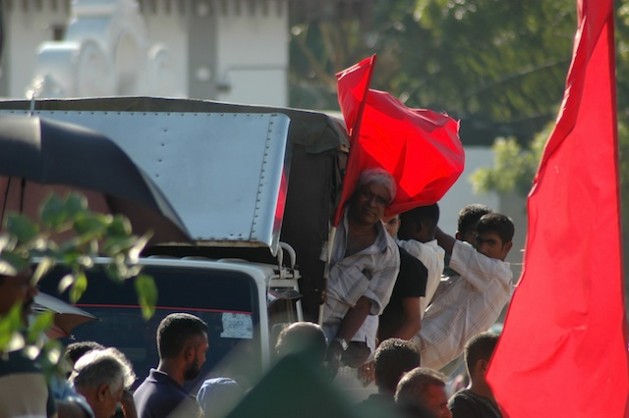 Sri Lanka is gripped by election fever, but the impoverished majority fears that the presidential race will not ease their financial hardships. Credit: Amantha Perera/IPS

COLOMBO, Nov 28 2014 (IPS) - Priyantha Wakvitta is used to seeing his adopted city, Colombo, transform into a landscape of bright sparkling lights and window dressing towards the end of the year.

This year, he says, he is having a double dose of visual stimulation, with publicity materials for the January Presidential Election competing with Christmas décor at every turn.

Though the presidential race could shape up to be a close one, there is no competition over which event will take Colombo by storm: political propaganda is drowning out the festive mood on every street corner.

“[Politicians] are spending millions just to get their faces all over the city, while I am struggling to keep my family fed and my children in school." -- Priyantha Wakvitta, a 50-year-old bread seller in Sri Lanka's capital, Colombo
Four days after the elections were announced on Nov. 21, at least 1,800 cutouts of the incumbent president, Mahinda Rajapaksa, had been deployed within the limits of the Colombo Municipality, according to national election monitors with the Campaign for Free and Fair Elections (CaFFE).

Head of the United People’s Freedom Alliance (UPFA), Rajapaksa has enjoyed massive support around the country for his role in decimating the separatist Liberation Tigers of Tamil Eelam, thus bringing an end to nearly three decades of civil war in 2009.

But as the post-war years revealed themselves as a time of hardship of a very different nature – economic rather than political – his popularity has waned.

His main challenger in the presidential race, Maithripala Sirisena, was until recently the general secretary of Rajapaksa’s own political party, the Sri Lanka Freedom Party (SLFP).

Last week Sirisena stepped out of government and into the role of Rajapaksa’s contender as the common opposition candidate.

The election is turning out to be a keen contest; already there have been eight defections from the ruling coalition’s United People’s Freedom Alliance (UPFA), while the powerful nationalist party, the Jathika Hela Urumaya, once the government’s staunch ally, has declared its opposition to the Rajapaksas.

The poster campaign around the capital city and throughout the country is a bid to win hearts and minds, but the beaming cutouts of politicians have left people like Wakvitta at best annoyed, at worst disgusted.

“They are spending millions just to get their faces all over the city, while I am struggling to keep my family fed and my children in school,” said the 50-year-old father of two, originally from the southern district of Galle, but self employed in the capital for the last decade.

Wakvitta is an enterprising man. He runs his own small bakery in a Colombo suburb and makes a living by distributing bread to households. He used to make a profit of around 30,000 rupees, or roughly 250 dollars, a month. But that figure has been going down steadily over the last year.

He tried to branch out to a small vegetable business earlier this year, but burnt his hands and lost his 100,000-rupee investment, the equivalent of about 700 dollars, no small sum in a country where the average annual income is about 550,000 rupees or 4,100 dollars.

“People don’t have money, they are finding it hard to make ends meet,” Wakvitta said.

Though Sri Lanka has maintained an impressive economic growth rate of 7.5 percent and the Rajapaksa government has a string of high-profile infrastructure projects under its belt, including a new seaport and airport, low-income earners say they are struggling to survive.

The national poverty rate is 6.7 percent but most rural areas report higher figures. In Wakvitta’s native Galle District it is 9.9 percent, in the south-central district of Moneragala it is 20.8 percent and in Rathnapura, capital of the southwestern Sabaragamuwa Province, it is 10.4 percent, according to government data.

The problems the poor face are multi-faceted; while wages have remained static, basic commodities have quietly increased in price. Most significant among them has been the upward trend in the cost of rice, a dietary staple here.

Fueled by an 11-month drought that has caused a loss of almost a third of the planted area, the 2014 rice harvest is expected to be at least 20 percent less than last year’s four million metric tons, and a six-year low.

Rice prices have risen 33 percent according to the World Food Programme (WFP), and vegetable and fish prices have also shown periodic upward movement primarily due to inclement weather.

Cognizant of the hardships faced by the Sri Lankan masses, political parties across the spectrum frequently use the election run-up to promise the earth to the average voter – from subsidies to assistance packages – pledging to make life easier for those who form the majority of the electorate.

But Ajith Dissanayake, who is from the southern Galle District and makes a living from paddy cultivation, says that token gestures will not do.

“Election handouts will not work, there needs to be some kind of concerted plan to help the poor,” he told IPS.

In the northern regions of the country, where the population is still trying to shake off the residual nightmare of nearly 30 years of civil war, the situation is even worse.

The conflict ended in May 2009, and since then the government has injected over three billion dollars into the reconstruction effort in the Northern Province, largely for major infrastructure projects.

But the region is mired in abject poverty. The Mullaithivu District, which witnessed the last bloody battles in the protracted conflict between the Sri Lankan armed forces and the LTTE over five years ago, is the poorest in the nation, with a poverty ratio of 28.3 percent.

The adjoining Kilinochchi District has a recorded poverty headcount of 12.7 percent.

“It is very difficult, it is like we are fighting another conflict: this time with poverty,” said Thiyagarasa Chandirakumar, a 38-year-old disabled father of two from Oddusuddan, a small village located deep inside Mullaithivu.

He told IPS that despite new electrification programmes, many in his village are still waiting for the supply to light up their homes.

“Most of us don’t have the money to get new connections, we don’t even have money sometimes to take a bus,” explained Chandirakumar, who is confined to a wheelchair due to a wartime injury.

Both Wakvitta and Chandirakumar have simple requests from the candidates standing for the highest office in the country: “Make sure our lives are better off than they were before,” Wakvitta said.

That request, however, is unlikely to be realised any time soon. News of the snap election, coupled with the surprise announcement this past week of a common opposition candidate, has thrown the country into a period of uncertainly, at least in the short term.

Two days after elections were announced, the Colombo Stock Market took a nose-dive, with the All Share Price Index falling by 2.3 percent on Monday, Nov. 24 – the worst slide since August 2013.

Analysts say that investors are likely to hold off for the time being, with long-term policy measures also taking a back seat to what promises to be a fierce contest.

“Investors – whether local or foreign – like certainty,” Anushka Wijesinha, an economist with the national think-tank the Institute for Policy Studies, told IPS.

“Policy and political certainty have been established fairly well over the last few years and any disruption to this would no doubt be viewed negatively by investors. So, the recent political developments will be watched closely,” he added.

Wijesinha also said that elections should be more about long term policies than about handouts aimed at wining votes.

“This calls for a shift from the heavy focus on subsidies, welfare payments, and other generous transfers for rural populations – which may help alleviate poverty in the short term – to improving skills, productivity and access to new economic opportunities, which help raise living standards on a more sustained basis,” he said.

Despite the end of the war ushering in renewed hopes of development, income disparities have stubbornly persisted. According to government data, the country’s richest 20 percent still enjoy close to half of the nation’s income, while the poorest 20 percent only share five percent of national wealth among them.

For those like Wakvitta and Chandirakumar, the future looks bleak, with or without elections. Both know for sure that in the short term nothing much will change for the better.

“Hopefully whoever becomes the next president will take the bold steps needed to help people like me,” Wakvitta said as he sped away on his motorbike, looking for his next customer.