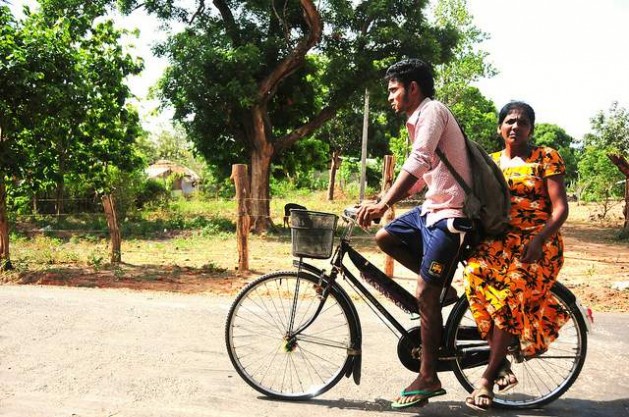 In Sri Lanka’s poverty-stricken Northern Province, residents say they must stretch the few resources they have in order to survive. Credit: Amantha Perera/IPS

ODDUSUDDAN, Sri Lanka, Aug 24 2014 (IPS) - In this dust bowl of a village deep inside Sri Lanka’s former conflict zone, locals will sometimes ask visitors to rub their palms on the ground and watch their skin immediately take on a dark bronze hue, proof of the fertility of the soil.

Village lore in Oddusuddan, located in the Mullaitivu district, some 338 km north of the capital Colombo, has it that the land is so fertile, anything will grow here. But Mashewari Vellupillai, a 53-year-old single mother, knows that rich farmland alone is not enough to ensure a viable future.

Thirty years of civil war in the Northern Province, where the separatist Liberation Tigers of Tamil Eelam (LTTE) were defeated by government forces in May 2009, are not easily forgotten, and five years of peace have not yet resulted in prosperity for many residents in this former battleground.

“You have to do things on your own otherwise there will be no money." -- Velupillai Selvarathnam, a former lorry driver from Mullaitivu
Schemes to provide relief and employment opportunities for civilians and rehabilitated combatants are few and far between, and several villagers tell IPS that survival here is dependent on creative thinking to make the most of the few income generation options available.

At least 30 percent of the population in the province derives their income from agriculture or related areas, and a 10-month-old drought is wrecking havoc on farmers who tend to focus on a single crop at a time.

After taking a 50,000-rupee (384-dollar) financial hit following a failed harvest last year, Vellupillai has diversified the two-acre plot that surrounds her half-built house and planted everything from onions and bananas to cassava, aubergines and tobacco.

In addition, she has leased out her two acres of paddy land, and hires workers intermittently to see to its harvest.

Vellupilla’s most profitable crop is tobacco; a single, good-quality leaf fetches about 10 rupees (0.77 dollars), giving her an income of about 10,000 rupees (about 76 dollars) monthly.

“I can’t take a chance by depending on one source of income, I have to be sure that I have alternatives,” she tells IPS, citing cases of villagers here falling victim to a buyers’ market, as was the case in 2011 when most Oddusuddan residents grew aubergines and were forced to part with their yields for dirt cheap prices as buyers from Vavuniya Town, 60 km south, manipulated the market.

Over 400,000 people like Vellupillai have returned to the north after fleeing the last days of fighting between armed forces and the LTTE.

Since then, the government has poured over three billion dollars into massive infrastructure projects in the region, including rail-links, new roads and electrification schemes.

But despite such impressive figures, life in general remains hard. Poverty is rampant according to the latest government figures released for the first quarter of this year.

Four of the five districts that make up the province recorded rates higher than the national figure of 6.7 percent.

Three of them – Kilinochchi, Mannar and Mullaittivu – recorded poverty rates of 12.7 percent, 20.1 percent and 28.8 percent respectively, according to the latest government poverty head count released in April. Experts say this comes as no surprise, since these districts were hit hardest by the war, and are suffering the worst of its long-term impacts.

Unemployment also remains above national levels. There are no official figures for full unemployment rates in the Northern Province, but in the two districts where figures are available – Kilinochchi at 9.3 percent and Mannar at 8.1 percent – they were over twice the national rate of four percent.

Economists working in the region feel that unemployment could be as high 30 percent in some parts of the province.

A dearth of proper housing adds to the troubles of the north, with only 41,000 out of a required 143,000 houses being handed over to returning residents, while some 10,500 homes are still under construction.

According to UN Habitat, initial funding was for 83,000 units, including those already built, but no funds are available for the remaining 60,000 homes.

“Those who can make the situation work for them, or use what they have in them […] will fare better,” Sellamuththu Srinivasan, the additional district secretary for the Kilinochchi District, told IPS.

That is precisely what Velupillai Selvarathnam, a former lorry driver from Mullaitivu, has done.

Since the war’s end, he rents a small vehicle and commutes between Colombo and his hometown, covering a distance of over 300 km each week to bring ready-made garments from the capital to his small shop close to the town of Puthukkudiyiruppu.

That is good money, especially if it is constant in a district that is one of the poorest five in the country and where the average monthly income is less than 4,000 rupees (about 30 dollars).

Selvarathnam, who has a deep scar on the side of his chest running down to his abdomen caused by a shell injury, tells IPS, “You have to do things on your own otherwise there will be no money.” His next aim is to travel to India to purchase garments in bulk, so that he can cut down on costs even more.

Like him, Velvarasa Sithadevi, another resident of Oddusudan has her hands full. She has to take care of a 25-year-old son who suffers from shellshock and a husband who is yet to recover from his wartime injuries.

When the family received a 25,000-rupee (192-dollar) grant from the U.N. Refugee Agency upon returning to their home village in 2011, Sithadevi invested the money in setting up a small shop. “We live in the back room, that is enough for us,” she told IPS.

Sithadevi is a good cook, and sells food products in her roadside shop. “It is a good business, especially when there are people working on roads and other construction [sites],” she stated, adding that she makes about 4,000 rupees (30 dollars) a day.

But for every single individual success story, there are thousands of others unable to break out of the suffocating cycle of poverty in the region.

Public official Srinivasan said that if assistance were to increase, the overall situation would improve. That, however, is unlikely to happen any time soon.

“The next option is to attract private sector investment […]. We are talking with companies in the south, there is some progress, but we need more companies to come in,” he stressed.