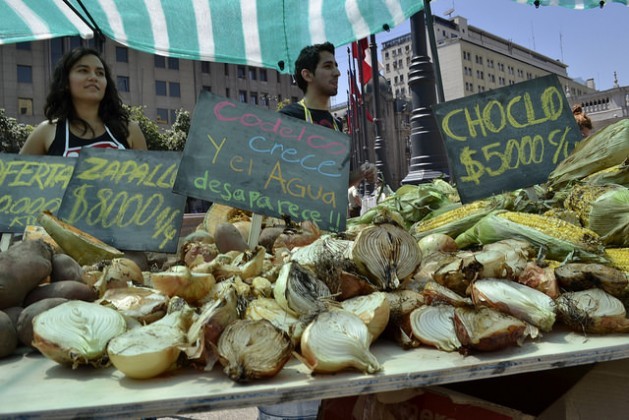 A display of what the harvest of fruit and vegetables would be like without the water from the glaciers, in the Jan. 23, 2015 Fair Without Glaciers organised by Greenpeace in Santiago’s Plaza de la Constitución. Credit: Marianela Jarroud/IPS

SANTIAGO, Feb 4 2015 (IPS) - Chile’s more than 3,000 glaciers are one of the largest reserves of freshwater in South America. But they are under constant threat by the mining industry and major infrastructure projects, environmentalists and experts warn.

The lack of legislation to protect them allowed the global environmental watchdog Greenpeace to create the Glacier Republic in March 2014 – a virtual country created on 23,000 sq km of glaciers in the Chilean Andes, which already has over 165,000 citizens and 40 embassies spread around the world.

“The Glacier Republic emerged in response to a need, because the glaciers in this country aren’t protected,” the executive director of Greenpeace Chile, Matías Asún, told Tierramérica.

A glacier is a huge mass of ice and snow that forms where snow in the wintertime gathers faster than it melts in the summer and flows slowly over an area of land. Most of the world’s freshwater — 69 percent — is locked away in glaciers and ice caps.

“These are strategic reserves of water that contribute in a significant manner during periods of drought and are found not only in the high mountains but also in the south of the country,” Asún explained.

“Many glaciers have been buried and conserve important reserves of water,” he added. “These supply water to the river basins, and not only the most basic human activities but also agriculture and the economy of the country depend on the basins.”

Chile, a mining country whose main source of wealth is copper, has 82 percent of South America’s glaciers, according to Greenpeace. However, most of them have visibly retreated due to the impact of climate change and large-scale mining activities.

Addressing the Chilean legislature in 2014, glaciologist Alexander Brenning, from the University of Waterloo, Ontario said the magnitude of interventions on glaciers in Chile was unparalleled in the world, and urged that the cumulative effects be assessed.

“The experts are emphatic: Chile has one of the worst records in the world in terms of destruction of glaciers,” Asún said. “This is the sad situation that forced us to found the Glacier Republic.”

“Because the glaciers were in no man’s land, we used that legal vacuum to found the Glacier Republic. We took possession of the entire surface area of glaciers in Chile and declared ourselves an independent republic,” he added.

The Glacier Republic, created as an awareness-raising campaign, was founded on the basis of the Convention on Rights and Duties of States, better known as the Montevideo Convention after the city where it was signed in 1933. The first article of the convention establishes four requisites for declaring the creation of a state: a permanent population, a defined territory, a government, and the capacity to enter into relations with other states.

The aim of the Glacier Republic is to push for what the citizens describe as a “five-star” law on glaciers, which would guarantee the total protection of Chile’s glaciers. The activists want protection of the glaciers as a national asset for public use to be introduced in the constitution.

They also argue that the law should establish that “the glaciers represent strategic reserves of water in a solid state,” and that it should include a legal definition of glaciers and descriptions of the different kinds of glaciers and their ecosystems, and specify what kinds of activities are permitted and prohibited in each ecosystem.

In addition, the idea is to establish in the law a grace period and specific timeframe for activities currently carried out in protected or potentially protected areas to adapt to the new law.

In May 2014, lawmakers from the self-described “glacier caucus”, which includes the former student leader and current Communist legislator Camila Vallejo, introduced a draft law in Congress to create a legal framework to protect the country’s glaciers.

The current legislation allows activities like mining or the construction of infrastructure to affect a glacier, if the impact is spelled out in the environmental impact assessment and compensated for in some way.

In August, Congress agreed to try to move towards passage of a new law. But the draft law, which has drawn criticism from different sides, has not yet been approved.

Chilean glaciologist Cedomir Marangunic, who works with different technologies to save and create new glaciers, told Tierramérica that he believes certain well-regulated activities, such as tourism or development projects, can be allowed in the areas of the glaciers, unless prohibiting all human activity is indispensable for the survival of a specific glacier.

But he said glaciers, especially the ones located on privately owned territory, should be in the public domain by law.

Marangunic, a geologist at the University of Chile with a PhD in glaciology from Ohio State University in the U.S., said that although “some mining” hurts glaciers, “the pollution caused by large cities like Santiago or the smoke from the burning of grasslands and forests” also damage them.

But for the Diaguita Community of Huasco Valley in the arid northern region of Atacama, where the Canadian company Barrick Gold’s Pascua Lama gold and silver mine is located, there is no room for doubt.

“Glaciers are the reservoirs of water that we have had for thousands of years. And today, in times of drought, it is the glaciers that keep us alive and supplied with water,” the indigenous community’s spokesman, Sebastián Cruz, told Tierramérica.

Huasco Valley, in the Atacama desert, the driest in the world, runs across the Andes mountains to the sea and is fed by water from the glaciers, added the representative of the Diaguita native community, who live in that vulnerable ecosystem.

Far from living up to the commitment expressed in the environmental impact study, the Pascua Lama gold mine has destroyed “nearly 99 percent of the Esperanza glacier and the Toro 1 and 2 glaciers,” Cruz said.

The Diaguita community argues that a new law on glaciers must guarantee protection for certain conservation areas and must ban any extractive or mining activities in the glaciers and the surrounding landscape.

Socialist President Michelle Bachelet promised to protect the glaciers, in a May 2014 speech to the nation. But since then she has not referred publicly to the issue. A group of legislators from the governing Nueva Mayoría have backed the draft law.

The citizens of the Glacier Republic promise they won’t back down until a strong law on glaciers is passed.

“For the time being, the glaciers belong to the Glacier Republic, and we will be in a dispute with the Chilean state until we see a determined commitment to a real law,” Asún said.