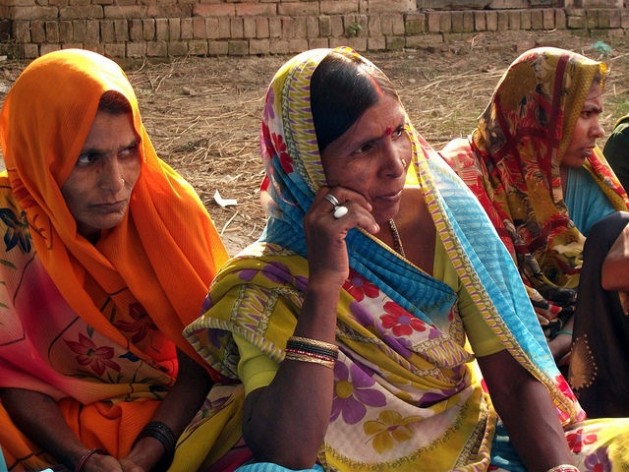 Government data indicates that 40 percent of all Indian women have experienced domestic violence, but activists believe the figure is closer to 84 percent. Credit: Stella Paul/IPS

MUMBAI, Feb 27 2015 (IPS) - “One time my husband started slapping me hard on the face because I had not cooked the rice to his satisfaction,” Suruchi* told IPS. “He hit me so hard that my infant daughter fell from my arms to the ground.”

For 20 years 47-year-old Suruchi, a resident of India’s coastal megacity Mumbai, faced physical and verbal abuse within the walls of her home. Her husband would often lock her out of their apartment through the night and one day even tried to strangle her.

“I had hoped all along that by obeying [my husband] things would eventually get better. While recovering in hospital I understood [...] that I owed it to myself and my children to walk out.” -- a domestic violence survivor in Mumbai
“I never knew what would set him off – it could be talking to a neighbour or looking out of the window. I would get ready for work in the morning and he would suddenly announce that I had to stay home all day.”

Suruchi had no access to her earnings as she was expected to hand her salary over to her in-laws. “On the rare occasion that I spoke out, I would get beaten up.” Her parents sensed that she was unhappy but Suruchi never told them the full story.

She was just 20 when she got married, she told IPS, and the constant abuse has left a profound impact on her and her children, especially her son who is anxious and largely uncommunicative.

It was only after she suffered a nervous breakdown following an especially violent assault that she finally acted.

“I had hoped all along that by obeying him things would eventually get better. While recovering in hospital I understood that my attitude had fuelled the abuse and that I owed it to myself and my children to walk out.”

Today Suruchi has put the past behind her. She lives independently and is pursuing a degree in law. However, her story is all too common in millions of homes across India.

Considering that women comprise over 48 percent of India’s population of 1.2 billion people, this means that hundreds of millions of people are living a nightmare in what is considered the world’s largest democracy.

However many experts believe that a 2003 survey conducted by a non-profit and supported by the Planning Commission of India that threw up a figure of 84 percent paints a more accurate picture.

“It tells us that many cases are going unreported,” says Rashmi Anand, a domestic violence survivor who runs a free legal aid and counseling service for victims in the capital, New Delhi, in collaboration with the police.

Interestingly, figures for domestic violence reported in crime statistics in many states are significantly higher than those that find their way into national-level databases.

An abundance of violence, too few solutions

In a 2013 study by the New Delhi-based think tank National Council for Applied Economic Research, over half of the married women surveyed said that they would be beaten up for going out of the house without permission (54 percent); not cooking properly (35 percent) and inadequate dowry payments (36 percent).

Studies also indicate that economic and social gains have put women at far greater risk in a deeply patriarchal country like India.

A 2014 report in Population and Development Review, a peer reviewed journal, shows that women who are more educated than their husbands are at higher risk of domestic violence as men see in it a way to re-assert their power and control over their wives.

In 1983 domestic violence was recognised as a criminal offence under Section 498-A of the Indian Penal Code. However only in 2005 was a separate civil law to deal with the specifics of domestic violence introduced.

Among other things, the law defines domestic violence and widens the scope to verbal, economic and emotional violence. It also takes into account a woman’s need for financial support and protects her from being thrown out of her home and provides for monetary relief and temporary custody of children.

Since it came into force, activists say there has been a gradual rise in the number of women seeking help.

“Earlier women would seek legal help only when they were thrown out of their marital homes”, says New Delhi-based lawyer C.P Nautiyal, who counsels victims of domestic violence.

“Most women believe that suffering verbal abuse or being slapped by their husbands is expected behaviour. Since the law came into being there is greater awareness regarding domestic violence.”

However, there is still considerable stigma attached to being divorced and this prevents many women from reaching out.

“Economically women in India have made great progress but not so much when it comes to personal growth,” says Anand. “The attitude remains skewed when it comes to relationships. A woman continues to be defined by marriage and this cuts across all classes.”

“There is a lot of pressure to stay married,” she tells IPS. “I have found that even highly placed women don’t like to reveal that they are divorced or separated. It’s like being raped, they will hide it as much as possible.”

Experts say that it is women from under-educated or underprivileged backgrounds who are reaching out for help in greater numbers. “Those who come from the upper classes are generally more reluctant to walk out as they stand to lose social status or a certain lifestyle,” Agnes says.

However it is precisely those women who are reaching out in greater numbers that the system is failing the most.

Most keenly felt is the lack of adequate government-run shelters. Barring the southern state of Kerala where shelter homes for domestic violence victims have been set up across 12 districts, authorities in other states have been neglectful.

“I am constantly looking for places where I can send impoverished, battered women to stay,” says Anand. Of the five shelters for women in crisis in the capital New Delhi, only two are functional. Even these can accommodate just 30 women each, and not for more than a month.

“Women are kept like prisoners there,” Agnes tells IPS about the shelters. “They can’t leave, not even to go to their places of work. Children above seven cannot stay with their mothers. Only those who are utterly destitute and desperate consider staying there.”

Another critical need is for fast-track courts to ensure cases get heard rapidly. The Indian legal system is notoriously slow and cases drag on for years, even decades.

However tougher laws alone cannot stem the tide of domestic violence as long as attitudes stay rooted in patriarchy.

The last government study done in 2006, the National Family Health Survey (NFHS), revealed that over 51 percent of Indian men didn’t think it wrong to assault their wives. More shockingly, 54 percent of the women themselves felt such violence was justified on certain grounds.

Activists say such biases are reflected every time a victim of domestic violence comes seeking help.

“We see it on the part of the police, NGOs, stakeholders and religious authorities,” points out Agnes. “The protection officer is supposed to collect evidence, file an order and take the victim to court. Instead the tactic is to tell her, ‘He slapped you a few times that’s all. Don’t make a big deal and sort it out’, and she is sent back to the hellhole.

“We have to stop this current approach of putting a Band-Aid on a gaping, bleeding wound [if we want] change to come about,” she stressed.