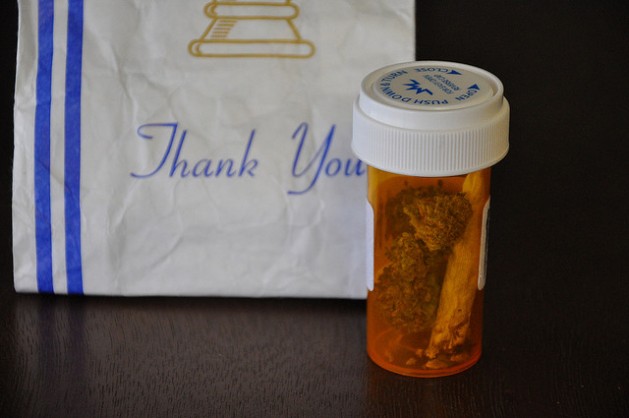 Medical marijuana from a dispensary in California. Credit: David Trawin/cc by 2.0

New Yorkers spoke out about limitations to the draft regulations of the Compassionate Care Act, which should introduce medical marijuana to the state early next year.

“I have stage four prostate cancer, so I have access, but I’m trying to broaden this for those who aren’t included. I’m concerned about veterans with post traumatic stress, victims of agent orange, traumatic brain injury from IEDs, and the effects of depleted uranium poisoning." -- Bill Gilson

At a public forum held Tuesday in the Bronx, concerns were raised about the proposed regulations, including access for low income patients, and the small number of illnesses which qualify for the treatment.

“The Department of Health can create incentives for industry,” said Julie Netherland of the Drug Policy Alliance, a drug-reform advocacy organisation that worked with legislators during negotiations.

“One of the things they could weigh as criteria for selecting companies who will produce the strains would be their plan to support low-income patients,” said Netherland.

The bill was signed into law last July, but the programme will likely be implemented in New York State in January 2016. This will be nearly two decades after medical marijuana was first introduced to the United States, with an initiative in California to allow medical cannabis in 1996.

Some 23 U.S. states and the District of Columbia have legalised cannabis for medical use, and four allow its recreational use.

The commissioner of health for New York State, Howard Zucker, has the power to include any number of conditions as he sees fit.

To pass the bill, legislators were forced to drastically narrow the eligibility criteria, according to the Alliance.

In the bill’s original form, marijuana was to be prescribed at a physician’s discretion. Partway through negotiations, it was reduced to 25 conditions, then in the final days before being passed, it was cut to just 10.

Those with anxiety, post-traumatic stress disorder and rheumatoid arthritis would be ineligible for the treatment.

Bill Gilson, president of the New York City chapter of Veterans for Peace, told IPS, “I have stage four prostate cancer, so I have access, but I’m trying to broaden this for those who aren’t included. I’m concerned about veterans with post-traumatic stress, victims of Agent Orange, traumatic brain injury from IEDs (improvised explosive devices), and the effects of depleted uranium poisoning.

“The Department of Health has to broaden the eligibility conditions,” he said.

There is no requirement that insurance cover medical marijuana, raising concerns that the treatment will be inaccessible to low-income groups.

Also under the regulations, as patients are not allowed to smoke the drug, they will be using vaporisers, which range in cost, and a registration fee is needed in order to receive a patient identification card.

The Drug Policy Alliance is calling on the department of health to make companies who want to produce the marijuana come up with a plan to support those with lower incomes who need the treatment.

Another option could be for the state government to divert some of the significant tax money to support those in need. Medicaid will not provide for the treatment.

The small scale of the proposed programme was also criticised. There will be only five producers of the drug and 20 dispensaries across the whole state.

Many see the regulations as a step toward full legalisation of marijuana in the state, including New York City Council member Mark Levine, who told IPS, “I’m really excited, but there are many limitations we need to address. I see this legislation as a step towards taxation and regulation.”

Limitations have also been placed on the delivery method the treatment will take – only oils and extracts are allowed, no smoking.

As the 45-day public comment period comes to a close on February 13th, those with concerns are encouraged to submit testimony on the New York State Department of Health website.

Marijuana is still illegal under federal law, although four states have now legalised it for recreational use, and 23 states and the District of Columbia have enacted medical marijuana laws.

Helen Redmond, a clinical social worker for the NGO Community Access, told IPS, “The exciting thing is, for the people who I work with, medical marijuana will help. Some people with mental illness have symptoms that are very distressing, for example, hearing voices, anxiety.

“Marijuana lowers the anxiety that they feel, and can boost a sense of wellbeing. It’s a beautiful thing. There are few side effects.

“Having a registration fee is problematic,” she added. “Also oils and extracts cost more to produce compared to having plant material – people can’t afford that. There are so many people in New York who are at poverty level or below. People who need medicine, their lives matter.”