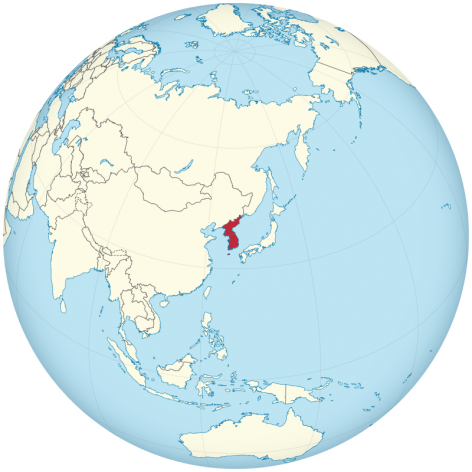 The Koreas on the globe. Credit: TUBS/ Licensed under CC BY-SA 3.0 via Wikimedia Commons

SEOUL, Feb 18 2015 (IPS) - The two Koreas are an odd match – both are talking about possible dialogue but both have different ideas of the conditions, and that difference comes from the 62-year-old division following the 1950-53 Korean War.

During this time, North Korea has become a nuclear threat – estimated to possess up to ten nuclear weapons out of the 16,300 worldwide (compared with Russia’s 8,000 and the 7,300 in the United States) according to the Ploughshares Fund’s report on world nuclear stockpiles – and South Korea has become the world’s major economic success story.

In a national broadcast on Jan. 16, South Korean president Park Geun Hye presented her vision for reunification by using the Korean word ‘daebak‘ (meaning ‘great success’ or ‘jackpot’). “If the two Koreas are united, the reunited Korea will be a daebak not only for Korea but also for the whole world,” she said.

Since she became leader of the South Korea’s conservative ruling party in 2013, Park has been referring to a new world that would come from a unified Korea. Her argument has been that if the two Koreas are reunited, the world could be politically less dangerous – free from the North Korea’s nuclear threat – and a united Korea could be economically more prosperous by combining the South’s economic and cultural power and the North’s natural resources and discipline.

Denuclearisation has been set as a key condition for daebak to come about. At a Feb. 9 forum with high-ranking South Korean officials, President Park said that “North Korea should show sincerity in denuclearisation efforts if it is to successfully lead its on-going economic projects. No matter how good are the programmes we may have in order to help North Korea, we cannot do so as long as North Korea does not give up its nuclear programme.”

However, observers have said North Korea has no reason to give up its nuclear weapons as long as it depends on its nuclear capability as a bargaining chip for political survival.  “Nuclear capabilities are the North’s only military leverage to maintain its regime as it confronts the South’s economic power,” said Moon Sung Muk of the Korea Research Institute of Strategies (KRIS).

In fact, there are few signs of changes. North Korea has conducted a series of rocket launches, as well as three nuclear tests – all in defiance of the U.S. sanctions that are partially drying up channels for North Korea’s weapons trade.

Amid recent escalating tension between Washington and Pyeongyang over additional sanctions, activities at the 5-megawatt Yongbyon reactor in North Korea which produces nuclear bomb fuel are being closely watched to monitor whether the North may restart the reactor.

In the meantime, South Korea has been denying the official supply of food and fertilisers to North Korea under the South Korean conservative regimes that started in 2008.

During the liberal regime of 2004-2007, South Korea was the biggest donor of food and fertilisers to North Korea.

Then there appeared to be a glimmer of hope when North Korea’s enigmatic young leader Kim Jong Un presented a rare gesture of reconciliation towards South Korea in his 2015 New Year’s speech broadcast on Korean Central Television on Jan. 1.

“North and South should no longer waste time and efforts in (trying to resolve) meaningless disputes and insignificant problems,” he said. “Instead, we both should write a new history of both Koreas … There should be dialogue between two Koreas so that we can re-bridge the bond that was cut off and bring about breakthrough changes.”

In his speech, the North Korean leader even went as far as suggesting a ‘highest-level meeting’ with the South Korean president. “If the South is in a position to improve inter-Korean relations through dialogue, we can resume high-level contacts. Also, depending on some circumstances and atmospheres, there is no reason we cannot have the highest-level meeting (with the South).”

In South Korea, hopes for possible inter-Korean talks have been subdued. “What North Korea wants from dialogue with the South is not to talk about nuclear or human rights, but to have the South resume economic aid,” said Lee Yun Gol, director of the state-run North Korea Strategic Information Centre (NKSIS).

The government in Seoul remains cautious about Pyongyang’s peace initiatives. “We are seeing little hope for any rosy future in inter-Korean relationships in the near future, although we are working on how to prepare for the vision of ‘daebak‘,” said Ryu Gil Jae, South Korean reunification minister, in a Feb. 4 press conference.

North Korean observers have said that economic difficulties have been pushing the North Korean government to relax its tight state control over farm private ownership. North Korean farmers can now sell some of their products in markets nationwide, in a gradual shift towards privatised markets.

Further, according to Chinese diplomatic academic publication ‘Segye Jisik’ (세계 지식), quoted by the South Korean news agency Yonhap News, the North Korean economy has improved since its new leader took office in 2012. From a 1.08 million ton deficit in stocks to feed the 20 million North Koreans in 2011, the deficit now stands at 340,000 tons.

According to observers, this report, if true, could send the signal that if North Korea is economically better off, it may be politically willing to reduce its dependence on the nuclear card in any bargaining process with South Korea.

U.S. sanctions have been used in the attempt to force North Korea to denuclearise, thus restricting North Korea’s trade, and the U.S. government levied new sanctions against North Korea on Jan. 2 this year in response to a cyberattack against Sony Pictures Entertainment. The FBI accused North Korea of the attack in apparent retaliation for the film, The Interview, a comedy about the assassination of North Korean leader Kim Jong Un.

But, while sanctions may work in troubling ordinary North Koreans concerned with meeting basic food needs, they have little impact on the North Korean government. “North Korea’s trade with China has become more prosperous and most of North Korea’s deals with foreign partners are behind-the-scene deals,” said Hong Hyun Ik, senior researcher at the Sejong Research Institute.

And, in response to the threat that it may be referred to the International Criminal Court (ICC), on the basis of U.N. findings on human rights, Kim Jong Un reiterated: “Our thought and regime will never be shaken.”

“The Seoul government knows that the pace of getting closer to the North should be constrained by U.N. or U.S. moves,” Moon added.