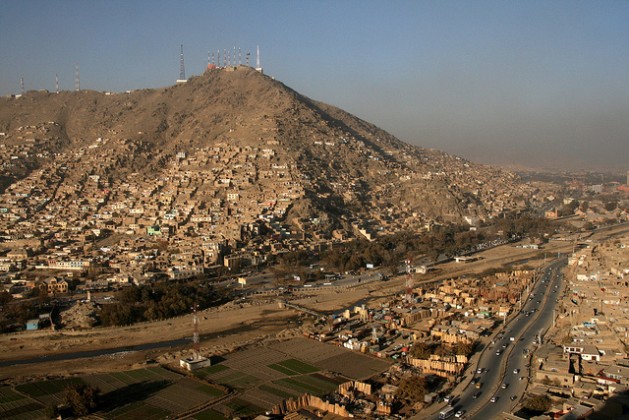 UNITED NATIONS, Mar 27 2015 (IPS) - First the centre of the silk route, then the epicenter of bloody conflicts, Afghanistan’s history can be charted through many diverse chapters, the most recent of which opened with the election of President Ashraf Ghani in September 2014.

Having inherited a country pockmarked with the scars of over a decade of occupation by U.S. troops – including one million unemployed youth and a flourishing opium trade – the former finance minister has entered the ring at a low point for his country.

“Our goal is to become a transit country for transport, power transmissions, gas pipelines and fiber optics.” -- Ashraf Ghani, president of Afghanistan
Afghanistan ranks near the bottom of Transparency International’s most recent Corruption Perceptions Index (CPI), tailed only by North Korea, Somalia and Sudan.

A full 36 percent of its population of 30.5 million people lives in poverty, while spillover pressures from war-torn neighbours like Pakistan threaten to plunge this land-locked nation back into the throes of religious extremism.

But under this sheen of distress, the seeds of Afghanistan’s future are slumbering: vast metal and mineral deposits, ample water resources and huge tracts of farmland have investors casting keen eyes from all directions.

Citing an internal Pentagon memo in 2010, the New York Times referred to Afghanistan as the “Saudi Arabia of Lithium”, an essential ingredient in the production of batteries and related goods.

The country is poised to become the world’s largest producer of copper and iron in the next decade. According to some estimates, untapped mineral reserves could amount to about a trillion dollars.

Perhaps more importantly Afghanistan’s landmass represents prime geopolitical real estate, acting as the gateway between Asia and Europe. As the government begins the slow process of re-building a nation from the scraps of war, it is looking first and foremost to its immediate neighbours, for the hand of friendship and mutual economic benefit.

Speaking of his development plans at the New York-based Council on Foreign Relations (CFR) Thursday, Ghani emphasised the role that the Caucasus, as well as Pakistan and China, can play in the country’s transformation.

“In the next 25 years, Asia is going to become the world’s largest continental economy,” Ghani stressed. “What happened in the U.S. in 1869 when the continental railroad was integrated is very likely to happen in Asia in the next 25 years. Without Afghanistan, Central Asia, South Asia, East Asia and West Asia will not be connected.

“Our goal is to become a transit country,” he said, “for transport, power transmissions, gas pipelines and fiber optics.”

Ghani added that the bulk of what Afghanistan hopes to produce in the coming decade would be heavy stuff, requiring a robust rail network in order to create economies of scale.

Roads, too, will be vital to the country’s revival, and here the Asian Development Bank (ADB) has already begun laying the groundwork. Just last month the financial institution and the Afghan government signed grant agreements worth 130 million dollars, “[To] finance a new road link that will open up an east-west trade corridor with Tajikistan and beyond.”

Thomas Panella, ADB’s country director for Afghanistan, told IPS, “ADB-funded projects in transport and energy infrastructure promote regional economic cooperation through increased connectivity. To date under the Central Asia Regional Economic Cooperation (CAREC) programme, 2.6 billion dollars have been invested in transport, trade, and energy projects, of which 15 are ongoing and 10 have been completed.

“In the transport sector,” he added, “six projects are ongoing and eight projects have been completed, including the 75-km railway project connecting Hairatan bordering Uzbekistan and Mazar-e-Sharif of Afghanistan.”

Afghanistan’s transport sector accounted for 22 percent of the nation’s gross domestic product (GDP) during the U.S. occupation, a contribution driven primarily by the presence of foreign troops.

Now the sector has slumped, but financial assistance from the likes of the ADB is likely to set it back on track. At last count, on Dec. 31, 2013, the development bank had sunk 1.9 billion dollars into efforts to construct or upgrade some 1,500 km of regional and national roads, and a further 31 million to revamp four regional airports in Afghanistan, which have since seen a two-fold increase in usage.

China too has stepped up to the plate – having already acquired a stake in one of the country’s most critical copper mines and invested in the oil sector – promising 330 million dollars in aid and grants, which Ghani said he intends to use exclusively to beef up infrastructure and “improve feasibility.”

Both India and China, the former through private companies and the latter through state-owned corporations, have made “significant” contributions to the fledgling economy, Ghani said, adding that the Gulf states and Azerbaijan also form part of the ‘consortium approach’ that he has adopted as Afghanistan’s roadmap out of the doldrums.

But in an environment that until very recently could only be described as a war economy, with a poor track record of sharing wealth equally – be it aid, or private contracts – the road through the forest of extractive initiatives and mega-infrastructure projects promises to be a bumpy one.

According to Anand Gopal, an expert on Afghan politics and award-winning author of ‘No Good Men Among the Living’, “There is a widespread notion that only a very powerful fraction of the local elite and international community benefitted from the [flow] of foreign aid.”

“If you go to look at schools,” he told IPS, “or into clinics that were funded by the international community, you can see these institutions are in a state of disrepair, you can see that local warlords have taken a cut, have even been empowered by this aid, which helped them build a base of support.”

Although the aid flow has now dried up, the system that allowed it to be siphoned off to line the pockets of strongmen and political elites will not be easily dismantled.

“When you have a state that is unable to raise its own revenue and is utterly reliant on foreign aid to make these projects viable […] the straightforward thing to do would be to nationalise natural resources and use them as a base of revenue to develop the economy, the expertise of local communities and the endogenous ability of the Afghan state to survive.”

Instead what happens is that this tremendous potential falls off into hands of contracts to the Chinese and others. “It’s a very neoliberal idea,” he added, “to privatise everything and hope that the benefits will trickle down.

“But as we’ve seen all over the world, it doesn’t trickle down. In fact, the people who are supposed to be helped aren’t the ones to get help and a lot of other people get enriched in the process.”

Indeed, attempts to stimulate growth and close the wealth gap by pouring money into the extractives sector or large-scale development – particularly in formerly conflict-ridden countries – has had disastrous consequences worldwide, from Papua New Guinea, to Colombia, to Chad.

Rather than reducing poverty and empowering local communities, mining and infrastructure projects have impoverished indigenous people, fueled gender-based violence, and paved the way for the concentration of wealth in fewer and fewer hands.

A far more meaningful approach, Gopal suggested, would be to directly fund local communities in ways that don’t immediately give rise to an army of middlemen.

It remains to be seen how the country’s plans to shake off the cloak of foreign occupation and decades of instability will unfold. But it is clear that Afghanistan is fast becoming the new playground – and possibly the next battleground – of emerging players in the global economy.