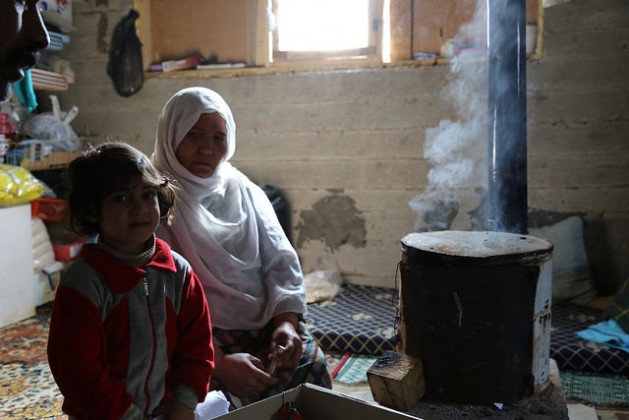 According to the United Nations, nearly two-thirds of all Syrians are now estimated to be living in extreme poverty. Credit: European Commission DG ECHO/CC-BY-ND-2.0

UNITED NATIONS, Mar 27 2015 (IPS) - A cash-strapped United Nations, which is struggling to reach out to millions of Syrian refugees with food, medicine and shelter, is desperately in need of funds.

The current status on humanitarian aid looks bleak: an appeal for 2.9 billion dollars for Syria’s Response Plan has generated only about nine percent of funding, and Syria’s Regional Refugee and Resilience Plan’s appeal for 4.5 billion dollars is only six percent funded, according to a statement released by the Security Council Thursday.

“Today, a Syrian's life expectancy is estimated to be 20 years less than when the conflict started. Unemployment is around 58 percent, up from around 10 percent in 2010; and nearly two-thirds of all Syrians are now estimated to be living in extreme poverty." -- Under-Secretary-General for Humanitarian Affairs Valerie Amos
Still, the United Nations is hoping for a more vibrant response from the international community at a pledging conference for humanitarian aid to Syria, scheduled to take place in Kuwait next week.

Secretary-General Ban Ki-moon says the Syrian people feel increasingly abandoned by the world as they enter the fifth year of a war that has torn their country apart and claimed the lives of over 200,000 civilians.

The pledging conference, scheduled to take place Mar. 31, “is an opportunity to raise some of the resources required to maintain our life-saving work. I encourage governments to give generously,” the U.N. chief said.

According to the United Nations, the devastating five-year old military conflict in Syria has also triggered “the greatest refugee crisis in modern times.”

Over half of Syria’s pre-war population — some 12.2 million people — and the more than 3.9 million Syrian refugees arriving in countries such as Lebanon, Turkey, Jordan and Egypt, “are in desperate need of humanitarian assistance”.

For the third consecutive year, the pledging conference is being hosted by the government of Kuwait, which has taken a significant role in alleviating the humanitarian crisis in Syria.

The conference will be chaired by the U.N. secretary-general, and hosted by the Emir of Kuwait, Sheikh Sabah Al-Ahmad Al-Jaber Al-Sabah.

Asked about the rate of delivery, a spokesman for the Kuwaiti Mission to the United Nations told IPS that Kuwait had delivered 100 percent of pledges to U.N. agencies, funds and programmes, plus international NGOs such as the International Committee of the Red Cross (ICRC).

Asked about next week’s conference, he said more than 78 countries and 40 mostly international organisations are expected to participate.

U.N. Deputy Spokesperson Farhan Haq said a very big part of Ban’s message next week would be: “As long as the crisis in Syria is not solved, you’re going to see millions of Syrians travelling to other countries in the region, and that has a tremendous effect on the livelihoods and the services and the way of life for people in all of the countries in the region.”

“So, we need to solve the problem in Syria, but we also need to give support to these countries at this time of need.”

Addressing the Security Council Thursday, Under-Secretary-General for Humanitarian Affairs Valerie Amos said civilians continue to bear the brunt of the conflict in Syria, which she described as “characterised by breathtaking levels of savagery.”

She said the secretary-general has submitted report after report highlighting the failure of the warring parties to meet their basic minimum legal obligations.

Amos pointed out indiscriminate aerial bombings, including the use of barrel bombs, car bombs, mortar attacks, unguided rockets and the use of other explosive devices in populated areas, are the hallmarks of this conflict.

“I have previously reported on the worsening socio-economic situation in the country, which has eroded the development gains made over a generation.

“Today, a Syrian’s life expectancy is estimated to be 20 years less than when the conflict started. Unemployment is around 58 percent, up from around 10 percent in 2010; and nearly two-thirds of all Syrians are now estimated to be living in extreme poverty,” she told the Council.

The inability of this Council and countries with influence over the different parties at war in Syria to agree on the elements for a political solution in the country means that the humanitarian consequences will continue to be dire for millions of Syrians, she warned.

Children are particularly badly affected with 5.6 million children now in need of assistance. Well over two million children are out of school. A quarter of Syria’s schools have been damaged, destroyed or taken over for shelter. It will take billions of dollars to repair damaged schools and restore the education system, Amos said.