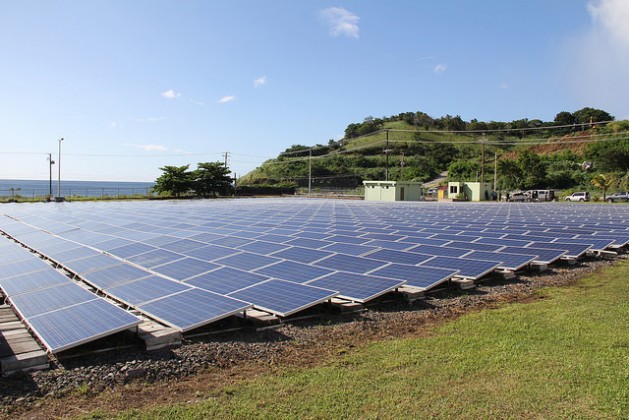 ST. JOHN, Antigua, Mar 26 2015 (IPS) - Richard Huber is chief of the Sustainable Communities, Hazard Risk, and Climate Change Section of the Department of Sustainable Development of the Organisation of American States (OAS). Its objective? Foster resilient, more sustainable cities – reducing, for example, consumption of water and energy – while simultaneously improving the quality of life and the participation of the community.

On a recent visit to Antigua, IPS correspondent Desmond Brown sat down with Huber to discuss renewable energy and energy efficiency. Excerpts from the interview follow.

Q: What is a sustainable country?

A: A sustainable country is a country that is significantly trying to limit its CO2 emissions. For example, Costa Rica is trying to become the first zero emissions country, and they are doing that by having a majority of their power from renewable sources, most notably hydroelectric but also wind and solar and biofuels.

So a sustainable country in the element of energy efficiency and renewable energy would be a country that is planting lots of trees to sequester carbon, looking after its coral reefs and its mangrove ecosystems, its critical ecosystems through a national parks and protected areas progamme and being very, very energy efficient with a view towards, let’s say by 2020, being a country that has zero carbon emissions.

Q: How can small island states in the Caribbean be sustainable environmentally?

A: The first thing you would want to do is to have a very strong national parks and protected areas programme, as we are working on right now through the Northeast Management Marine Area as well as Cades Bay in the south, two very large parks which would encompass almost 40 percent of the marine environment.

Second of all, be highly energy efficient. Try to encourage driving hybrid cars, fuel efficient cars and have a very good sustainable transport programme. Public transportation actually is a great poverty alleviation equaliser, helping the poor get to work in comfort and quickly. So be energy efficient, protect your biodiversity would be the two key things towards being a sustainable country.

Q: What examples of environmental sustainability have you observed during your visit to Antigua?

A: I’ve been travelling around with Ruth Spencer, who is the consultant who’s working on having up to 10 solar power photovoltaic electricity programmes in community centres, in churches and other outreach facilities. We went to the Precision Project the other day which not only has 19 kilowatts of photovoltaic, which I think is more electricity than they need, and they are further adding back to the grid. So that is less than zero carbon because they are actually producing more electricity than they use.

There is [also] tremendous opportunity for Antigua to grow all its crops [using hydroponics]. The problem with, for example, the tourism industry is that they depend on supply being there when they need it so that is the kind of thing that hydroponics and some of these new technologies in more efficient agriculture and sustainable agriculture could give. The idea would be to make Antigua and Barbuda food sufficient by the year 2020.

Q: Could you give me examples of OAS projects in the Caribbean on this topic?

A: This is the second phase of the sustainable communities in Central America and the Caribbean Project. So the first one we had 14 projects and this one we have 10 projects. So let me give you a couple of examples in the Caribbean. In Dominican Republic we are supporting hydroelectric power, mini hydro plants and also training and outreach on showing the people who live along river basins that they could have a mini hydro powering the community.

Another project which is very interesting is the Grenada project whereby 90 percent of the poultry in Grenada was imported. The reason it’s imported is because the cost of feed is so expensive. So there was a project where the local sanitary landfill gave the project land and the person is going by the fish market and picking up all the fish waste which was thrown into the bay earlier but he is now picking that up and taking it to the sanitary landfill where he has a plant where he cooks the fish waste and other waste and turns it into poultry feed.

So now instead of being 90 percent of the poultry being imported it’s now down to 70 percent and not only that, his energy source is used engine oil.

Q: What advice would you give to Caribbean countries on the subject of renewable energy and energy efficiency?

A: The first thing that needs to happen is there needs to be an enabling environment created on order to introduce renewables, in this case mostly solar and wind. Right around this site here in Jabberwock Beach there are four historic windmills which are now in ruins, but the fact of the matter is there is a lot of wind that blew here traditionally and still blows and so these ridges along here and along the beach would be excellent sites for having wind power.

Also lots of land for example around the airport, a tremendous amount of sun and land which has high security where you could begin to have solar panels. We’re beginning to have solar panel projects in the United States which are 150 megawatts which I think is more than all of Antigua and Barbuda uses.

So these larger plants particularly in areas which have security already established, like around the airport you can introduce larger scale photovoltaic projects that would feed into the grid and over time you begin to phase out the diesel generation system that supplies 100 percent or almost 99 percent of Antigua and Barbuda’s power today.

You can watch the full interview below:

Q&A from IPS News on Vimeo.