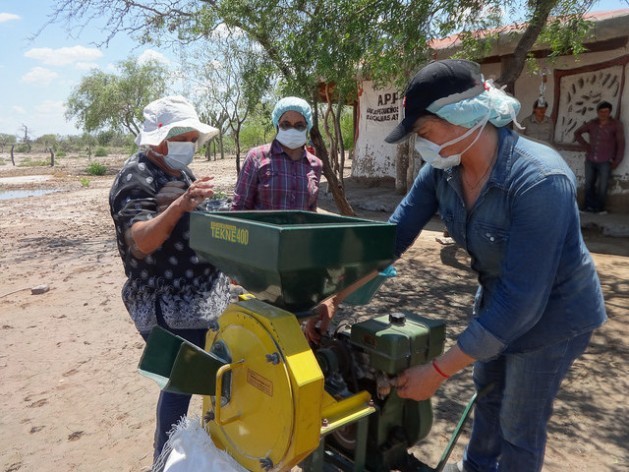 Small farmers make carob powder, thanks to the support of an Argentine government project to boost family agriculture, in the rural village of Guanaco Sombriana in the northern province of Santiago del Estero. Credit: Fabiana Frayssinet/IPS

BUENOS AIRES, Mar 12 2015 (IPS) - Industrial soy production continues to expand in Argentina, pushing small farmers out of the countryside and replacing other crops and cattle. It presents a challenge in a country where 70 percent of the food consumed comes from family farms, but which also needs the foreign exchange brought in by what has been dubbed “green gold”.

In 2013, exports of soybeans, soybean meal, and soybean oil brought in 23.2 billion dollars, representing 26 percent of the country’s total sales abroad, according to the business chamber that represents producers of grains and cereals, the Cámara de la Industria Aceitera-Centro de Exportadores de Cereales.

That makes transgenic soybeans Argentina’s main source of foreign currency. And the soybean production chain accounts for 5.5 percent of GDP and 10 percent of tax revenue.

“Above and beyond the questions of taxes or added value, without a doubt soy is the biggest contributor in the chain of oilseed production, in exports and in the surplus of dollars that it brings the economy,” economist Luciano Cohan told IPS.

“Without the dollars brought in by soy, the economy of the country would have to make a tremendous adjustment,” added the author of “El aporte de la cadena de soja a la economía argentina” (“The soybean chain’s contribution to the Argentine economy”).

Soy, which covers 31 million hectares, is Argentina’s leading crop. In 1990, there were only 4.8 million hectares of soy, according to the Asociación de la Cadena de la Soja (ACSOJA), the soy industry association.

Cohan said the expansion began in 1996, when genetically modified soy began to be planted, and it picked up speed in 2008, when producers began to grow soy to the detriment of other crops like wheat, after a crisis in rural areas due to a conflict between agribusiness and the centre-left government.

“Due to several reasons (GM) soy can be seen as a less risky crop than other activities,” he said. “For example, it is much cheaper to produce soy than maize, beef or dairy products, and it is a crop that has fewer regulatory risks.”

“’Soyisation’ in terms of monoculture is not a positive thing,” agronomist and academic Carlos Toledo told IPS. “But if producers don’t see better conditions for planting other crops, and if soy brings in the best tax revenue for the state, we find ourselves in a vicious circle that is very dangerous for the sustainability of our production systems.”

“The growth in the surface area covered by soy and by transgenic commodities in general has meant the displacement of local farmers and an increase in cattle raised in feedlots,” Carlos Vicente, a member of GRAIN, a Barcelona-based international organisation dedicated to global agricultural issues, told IPS.

As an example of the impact, he said thousands of small dairy farms had closed down. “In the (eastern) province of Buenos Aires alone, 300 shut down,” he said.

“This means production is stagnant and concentrated in the hands of large producers, who are now acting as an oligopoly,” he added. 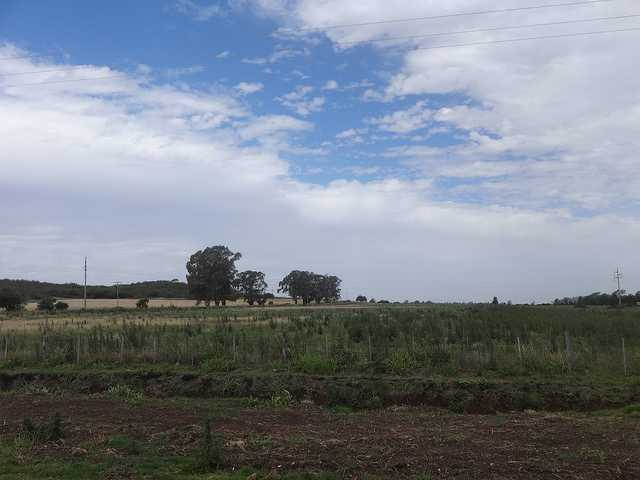 Land that has been deforested in the central Argentine province of Córdoba, as a result of the expansion of transgenic soy. Credit: Fabiana Frayssinet/IPS

A study by Miguel Teubal, a researcher at Argentina’s National Scientific and Technical Research Council (CONICET), reports that between 1997 and 2005, soy production rose by nearly 20 million tons, while the sunflower harvest fell by two million tons and rice fell by 0.5 million.

In the central province of Córdoba alone, the increase in soy production led to a shrinking of the number of head of cattle by 17 percent. The production of fruit and vegetables around the big cities also went down, “driving up the prices of widely-consumed basic products like tomatoes and potatoes,” the report said.

Soybean production has also led to greater concentration of land ownership, while driving up the value of land, GRAIN said. In 2010, more than 50 percent of soybean cultivation was controlled by just three percent of producers.

“That led to an unprecedented rural exodus: by 2007, more than 200,000 small farmers and rural workers and their families had left the countryside,” Vicente said.

“Soy is important as a source of income to finance social plans,” he said. “But the big paradox is that those plans will have to cover the basic needs of those who have been driven out of the countryside by this model of production.”

Toledo, the agronomist, said: “I have seen the exodus of many farmers from the dairy and beef-producing area, who did not necessarily first shift to ‘the soy model’. They moved to cities because their productive activities were not supporting them and they saw no future for their families.”

According to the United Nations Food and Agriculture Organisation (FAO), 14.4 percent of the territory in Argentina – nearly one hectare per capita – is still available for cultivation.

The question, he stated, is whether “small and medium-sized farmers are being provided with better conditions for diversifying their production.”

To strengthen family farms, in 2008 the government of Cristina Fernández created what is now called the Secretariat of Family Agriculture and Rural Development.

And on Jan. 20, a law was passed on “historic reparations for family agriculture to build a new rural reality in Argentina”, which says family farms are “of public interest” due to their contribution to food security and sovereignty.

Figures from the government’s National Registry of Family Agriculture indicate that the sector represents 20 percent of agricultural GDP, 20 percent of the country’s farmland, 65 percent of farmers, and 53 percent of rural employment. It also provides 70 percent of the food consumed in this country of 42 million people.

But 66 percent of farming families live in poverty, FAO reported.

The aims of the Secretariat include curbing the rural exodus, creating one million farms for some five million people.

“We need 50 years of investment in the agricultural sector to recover what has been destroyed,” said the head of the Secretariat, Emilio Pérsico.

But Pérsico added: “the issue is not soy, it’s agribusiness.”

“The most important conflicts we have aren’t with soy,” he said. “In Santiago (del Estero) we have problems with cattle farmers, in Río Negro with alfalfa producers, in Misiones with pine exporters, and in Mendoza with wine producers.”

“The possibilities of producing more or of owning our own land are disappearing….small farmers have been driven away by the rich, as if we were dogs; they have us cornered,” he told IPS.

To turn that process around, Vicente said, efforts are needed to combat other critical problems, such as the monopoly exercised by the multinational agrochemical corporations that produce genetically modified seeds, and the way they are “displacing and contaminating other crops.”

“These agrochemicals and transgenic seeds destroy the soil,” Fernández said. “We are worried that even though we have land, in the future we won’t be able to grow anything.”