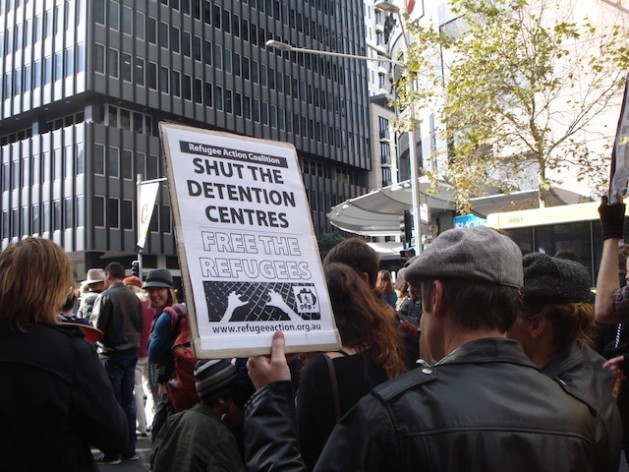 CANBERRA, Australia, Mar 11 2015 (IPS) - As conflicts in the Middle East and elsewhere pushed the number of refugees to 13 million last year, the international community is struggling to shoulder the humanitarian responsibility of protecting those fleeing violence and persecution in their homelands.

But in Australia – a wealthy nation, far from major war zones, whose 23 million people enjoy a per-capita GDP of 67,458 dollars – the government has implemented ruthless policies for the roughly one percent of global asylum seekers who hope to find refuge on its shores.

“[Australians] are being systematically conditioned into accepting the cruel treatment of others as necessary and inevitable.” -- Australian writer and social ecologist Isobel Blackthorn
Why, in a country boasting of prosperity and peace, are asylum seekers demonised for seeking safety and freedom? Why have policies resulting in degrading human treatment, amounting to torture, as recently found by the United Nations Special Rapporteur on Torture, been implemented with so little public resistance in Australia?

Last year Australia received 4,589 asylum applications compared to 29,009 in France and 51,289 in the United States. Over 37 years Australia received a total of 69,445 asylum seekers, only slightly higher than the 67,400 Germany received during the first six months of last year.

Immigration is a contentious issue in many countries, but Australia is the only one to indefinitely incarcerate asylum seekers in immigration detention centres on arrival.

Those who arrive by sea are transferred to offshore detention centres in the developing Pacific Island states of Nauru and Papua New Guinea. They are refused resettlement in Australia, even if assessed as refugees. More than a year ago the government began turning asylum-seeker boats back at sea.

“There is no greater deterrent to protecting our borders and stopping boats coming to Australia than by stopping the boats physically […],” Scott Morrison, then Minister for Immigration, said to media this past November.

This is necessary to stop people drowning at sea, the government argues, despite the policy threatening the lives of vulnerable people and violating the principle of non- refoulement laid out in the 1954 U.N. convention referring to the status of refugees.

In a report submitted to the U.N. Human Rights Council Monday, Juan Mendez, the U.N.’s special rapporteur on torture, concluded that Australia’s “Migration and Maritime Powers Legislation Amendment, which has passed both the house and the Senate of Australia at this point, violates the [Convention Against Torture, or CAT] because it allows for the arbitrary detention and refugee determination at sea, without access to lawyers.”

Mendez’s report also found that the indefinite detention of asylum seekers on Papua New Guinea’s Manus Island, together with reports of ill-treatment and outbreaks of violence, constituted a violation of the human right “to be free from torture or cruel, inhuman or degrading treatment, as provided by articles 1 and 16 of the [Convention Against Torture].”

In a statement published on Mar. 9, Daniel Web, director of legal advocacy at the Melbourne-based Human Rights Law Center, said, “Under international law, Australia can’t lock people up incommunicado on a boat somewhere in the middle of the ocean. Nor can we return people to a place where they face the risk of being tortured. Yet these are precisely the powers the Government has sought to give itself through recent amendments to its maritime law.”

Australia’s mandatory and prolonged immigration detention policies are also “in clear violation of international human rights law”, including the Convention on the Rights of the Child, the Australian Human Rights Commission (AHRC) recently reported.

Refugee assessments were suspended more than two years ago to remove advantage to those arriving by irregular means. By mid-2014, approximately 3,624 asylum seekers, including 699 children, were in detention centres.

Long confinement on average for 413 days in harsh living conditions were key factors in 34 percent of children and 30 percent of adults being diagnosed with serious mental disorders. There were 1,149 recorded incidents of serious assault, including sexual abuse, in detention centres, and 128 of children self-harming, the AHRC found.

The government’s recent announcement that children below 10 years will be released into community detention with bridging visas won’t apply to those who arrived before Jul. 19, 2013.

There is recognition by Australian legal and policy experts that “critical to any asylum policy is not whether it deters, but whether the needs of those seeking protection are met.” Organisations such as the Asylum Seeker Resource Centre and Refugee Action Coalition also provide refugee advocacy and support.

But a 2010 public survey revealed more than 60 percent of respondents accepted the government’s hard-line stance.

Conditioning the public to accept cruelty

For some experts, even more disturbing than the policies themselves is public acceptance of routine ill treatment of refugees.

“Australia has fought its ideological war with as much moral insanity as would be found in a dictatorship,” the Australian writer and social ecologist, Isobel Blackthorn, wrote in the National Forum last year.

“We are being systematically conditioned into accepting the cruel treatment of others as necessary and inevitable.”

Professor Nick Haslam, head of Melbourne University’s School of Psychological Sciences, told IPS, “Activists have been quick to criticise successive governments while letting the general public off the hook.”

Official references to asylum seekers as “illegals”, suggesting criminality – despite the United Nations High Commissioner for Refugees (UNHCR) stating clearly that “seeking asylum is not illegal and respecting the right to seek asylum includes provision of humane reception” – have not been sufficiently challenged.

There has been little public resistance to the electoral point-scoring of politicians who ignore the ‘push’ factors, such as global conflict, and regale the ‘pull’ factors, that the good life in Australia is attracting an invasion. This theory ignores the fact that the vast majority of asylum seekers head to Europe and the United States.

According to Blackthorn, “Many in Australian society adopt without question the views and falsehoods promulgated by politicians and the media that set out to inflate our sense of entitlement in ‘the lucky country’.”

In the 1990s, Robert Manne, Emeritus Professor at Melbourne’s La Trobe University, identified a “new complacency” in Australia following the demise of communism, when many western leaders believed their actions were now beyond reproach.

Complacency and parochialism have been exacerbated by geographical isolation and two decades of uninterrupted economic prosperity due to the mineral resources boom.

“Lacking a history that makes it easy to imagine the kind of desperation borne of political oppression and fear, many Australians are genuinely disturbed by the disorderly nature of the refugee scramble for safety,” Manne stated.

Haslam told IPS that public indifference is “driven primarily by the perception that asylum seekers are undeserving opportunists who are seeking entry to the country in an unfair manner” and that many are economic migrants, rather than in need of protection.

In reality, more than 88 percent of asylum seekers between 2008 and 2013 were found to be legitimate refugees.

Blackthorn suggests that the “asylum seeker issue feeds a nationalism that comes dangerously close to the far right”, adding that if the public doesn’t collectively use its democratic right to demand change of their government it is possible that “Australia will fall foul of the sorts of extremisms that have led to so many fleeing their homelands.”