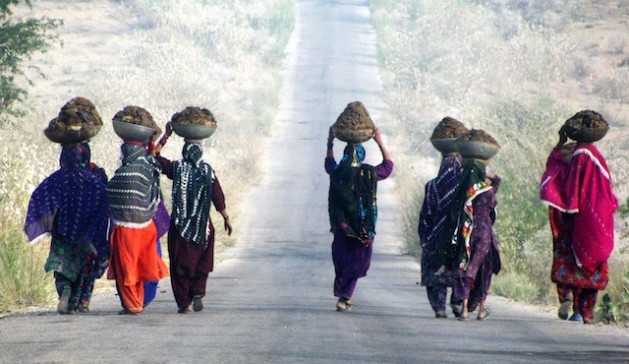 Women in Pakistan fare worse than all their neighbours in terms of resilience to climate change. Credit: Ali Mansoor/IPS

KARACHI, Mar 17 2015 (IPS) - When a group of women in the remote village of Sadhuraks in Pakistan’s Thar Desert, some 800 km from the port city of Karachi, were asked if they would want to be born a woman in their next life, the answer from each was a resounding ‘no’.

They have every reason to be unhappy with their gender, mostly because of the unequal division of labour between men and women in this vast and arid region that forms a natural boundary between India and Pakistan.

"South Asian countries need to realise the tremendous capacity for leadership women have in planning for and responding to disasters." -- David Line, managing editor of The Economist Intelligence Unit
“A woman’s work is never done,” one woman says.

“She works in the fields as well as the home, fetches water, eats less,” adds another.

Others say women are compelled to perform manual labour even while pregnant, and some lament they cannot take care of themselves, with so many others to look after.

While this mantra rings true for millions of impoverished women around the world, it takes on a whole new meaning in Tharparkar, one of 23 districts that comprise Pakistan’s Sindh Province, which has been ranked by the World Food Programme (WFP) as the most food insecure region of the country.

But a scheme to include women in adaptation and mitigation efforts is gaining ground in this drought-struck region, where the simple act of moving from one day to the next has become a life-and-death struggle for many.

Over 500 infant deaths were reported last year, the third consecutive drought year for the region. Malnutrition and hunger are rampant, while thousands of families cannot find water.

In its 2013 report, the State of Food Security, the Sustainable Development Policy Institute (SDPI) listed Tharparkar as the region with the country’s highest caloric deficit, a by-product of what it labels a “chronic” food crisis, prompted by climate change.

Of the 1.5 million people spread out over 2,300 villages in an area spanning 22,000 square km, the women are bearing the brunt of this slow and recurring disaster.

Tanveer Arif who heads the NGO Society for Conservation and Protection of Environment (SCOPE) tells IPS that women not only have to look after the children, they are also forced to fill a labour gap caused by an exodus of men migrating to urban areas in search of jobs.

With their husbands gone, women must also tend to the livestock, fetch water from distant sources when their household wells run dry, care for the elderly, and keep up the tradition of subsistence farming – a near impossible task in a drought-prone region that is primed to become hotter and drier by 2030, according to the Pakistan Meteorological Department.

The promise of harder times ahead has been a wakeup call for local communities and policymakers alike that building resilience is the only defense against a rising death toll.

Women here are painfully aware that they need to learn how to store surplus food, identify drought-resilient crops and wean themselves off agriculture as a sole means of survival, thinking that has been borne out in recent studies on the region.

The answer presented itself in the form of a small, thorny tree called the mukul myrrh, which produces a gum resin that is widely used for a range of cosmetic and medicinal purposes, known here as guggal.

Until recently, the plant was close to extinction, and sparked conservation efforts to keep the species alive in the face of ruthless extraction – 40 kg of the gum resin fetches anything from 196 to 392 dollars.

Today, those very efforts are doubling up as adaptation and resiliency strategies among the women of Tharparkar. 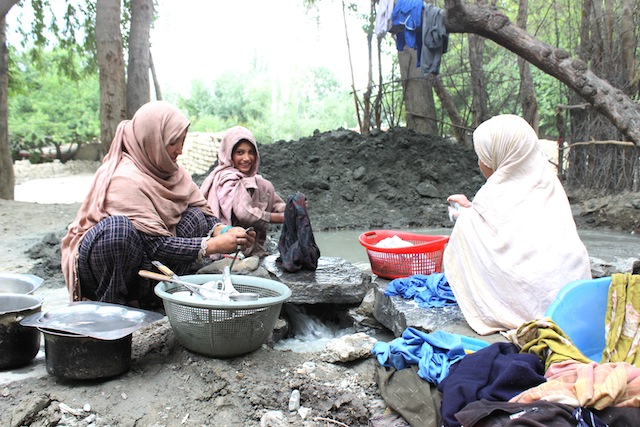 It began in 2013, when SCOPE launched a project with support from the Scottish government to involve women in conservation. Today, some 2,000 women across Tharparkar are growing guggal gum trees; it has brought nutrition, a better income and food security to all their families.

“For the first time in so many years, we did not migrate […] in search of a livelihood,” 35-year-old Resham Wirdho, a mother of seven, tells IPS over the phone from Sadhuraks.

She says her family gets 100 rupees (about 0.98 dollars) from the NGO for every plant she raises successfully. With 500 plants on her one-acre plot of land, she makes about 49 dollars each month. Combining this with her husband’s earnings of about 68 dollars a month as a farmhand, they no longer have to worry where the next meal will come from.

They used some of their excess income to plant crops in their backyard. “This year for the first time, instead of feeding my children dried vegetables, I fed them fresh ones,” she says enthusiastically.

For the past year, they have not had to buy groceries on credit from the village store. They are also able to send the eldest of their seven kids to college. 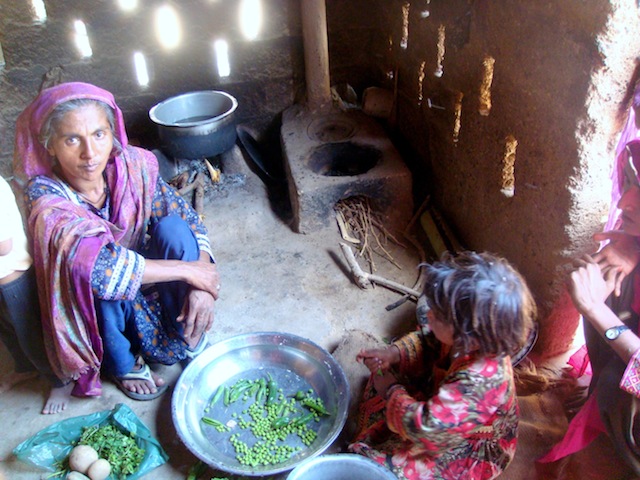 Women in Pakistan’s drought-struck Tharparkar District are shouldering the burden of a long dry spell that is wreaking havoc across the desert region. Credit: Zofeen Ebrahim/IPS

Wirdho says it is a gift that keeps on giving. In the next three years, each of the trees they planted will fetch at least five dollars, amounting to net earnings of 2,450 dollars – a princely sum for families in this area who typically earn between 78 and 98 dollars monthly.

And finally, the balance of power between Wirdho and her husband is shifting. “He is more respectful and not only helps me water and take care of the plants, but with the housework as well – something he never did before,” she confesses.

Lessons from Pakistan for South Asia

The success of a single scheme in a Pakistani desert holds seeds of knowledge for the entire region, where experts have long been pushing for a gendered approach to sustainable development.

With 2015 poised to be a watershed year – including several scheduled international conferences on climate change, many believe the time is ripe to reduce women’s vulnerability by including them in planning and policies.

Such a move is badly needed in South Asia, home to 1.6 billion people, where women comprise the majority of the roughly 660 million people living on less than 1.25 dollars a day. They also account for 50 percent of the agricultural labour force, thus are susceptible to changes in climate and ecosystems.

The region is highly prone to natural disasters, and with the population projected to hit 2.2 billion by 2050 experts fear the outcome of even minor natural disasters on the most vulnerable sectors of society, such as the women.

A recent report by The Economist’s Intelligence Unit (EIU), ‘The South Asia Women’s Resilience Index’, concluded, “South Asian countries largely fail to consider the rights of women to be included in their disaster risk reduction (DRR) and resilience-building efforts.”

Using Japan – with a per capita relief budget 200 times that of India, Pakistan or Bangladesh – as a benchmark, the index measured women’s vulnerability to natural calamities, economic shifts and conflict.

On all four categories considered by the EIU in measuring women’s resiliency – economic, infrastructural, institutional and social – Pakistan scored near the bottom. On indicators such as relief budgets and women’s access to employment and finance, it lagged behind all its neighbours.

According to David Line, managing editor of The Economist Intelligence Unit, “South Asian countries need to realise the tremendous capacity for leadership women have in planning for and responding to disasters. They are at the ‘front line’ and have intimate knowledge of their communities. Wider recognition of this could greatly reduce disaster risk and improve the resilience of these communities.”

And if further proof is needed, just talk to the women of Tharparkar.