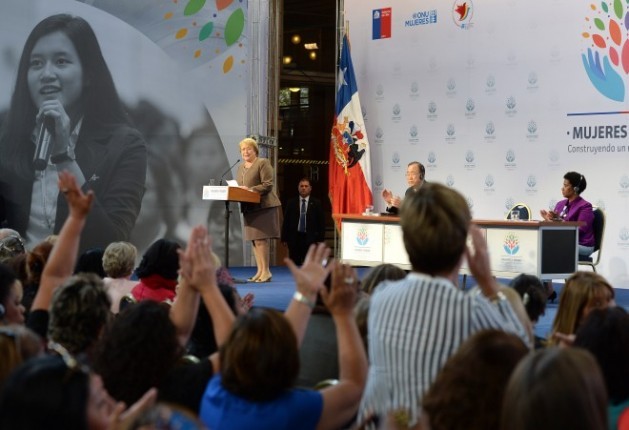 SANTIAGO, Mar 3 2015 (IPS) - Women leaders from every continent, brought together by U.N. Women and the Chilean government, demanded that gender equality be a cross-cutting target in the post-2015 development agenda. Only that way, they say, can the enormous inequality gap that still affects women and children around the world be closed.

“We celebrate that there has been progress in these last twenty years (since the Fourth World Conference on Women in Beijing) in this area…and the evidence is all the people around who came, shared their experiences, the good, the bad, the struggle ahead, the challenges ahead,” U.N. Women Deputy Executive Director Lakshmi Puri told IPS.

“At the current pace of change, it will take 81 years to achieve gender parity in the workplace, more than 75 years to reach equal remuneration between men and women for work of equal value, and more than 30 years to reach gender balance in decision-making.” – Santiago Call to Action

“Similarly health: you want women leaders in the health sector. Just as they need to have a voice in the design of the health sector and services,” said Puri, from India. “Women in the media is another critical area – you need voice, participation and leadership for women in the media, otherwise you will never get past the inequality and the negative stereotyping of women and their role in the media.”

The high-level event, “Women in power and decision-making: Building a different world”, held Feb.27-28 in the Chilean capital, assessed the advances made towards gender equality in the last 20 years and what still needs to be done.

One example raised at the meeting was the failure to reach the goal on gender balance in leadership positions.

The participants also discussed the route forward, towards the Sustainable Development Goals, for the period 2015-2030, designed to close gaps, build more resilient societies, and move towards sustainable prosperity for all.

The SDGs will replace the eight Millennium Development Goals (MDGs), which set out the international community’s collective development and anti-poverty targets for the 2000-2015 period.

The women leaders meeting in Santiago demanded that gender equality be mainstreamed into the 17 projected SDGs to prevent the progress from being slow and uneven, as it has been in the last 20 years in the case of the Beijing Platform for Action agreed at the Fourth World Conference on Women in September 1995. 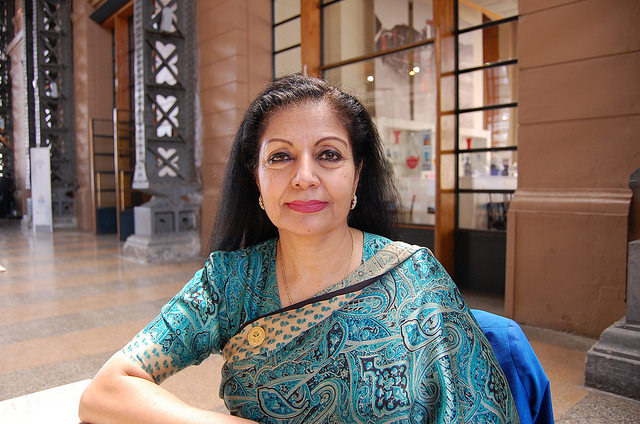 “At the current pace of change, it will take 81 years to achieve gender parity in the workplace, more than 75 years to reach equal remuneration between men and women for work of equal value, and more than 30 years to reach gender balance in decision-making,” reads the Call to Action document produced by the conference in Santiago, part of the activities marking the 20 years since Beijing.

Puri pointed out that in the future SDGs, number five will promote “gender equality and empowerment of women and girls.”

But she said it is equally important for “the other SDGS to have gender-sensitive targets and indicators that capture on one hand the impacts and needs of women, and that also capture the agency of women,” she said.

“How can you get health for all without health for women and by women and for women; similarly how can you get education for all, and sustainable energy for all. So all of those SDGs are intimately related to this, to the realisation and achievement of the gender equality goal.”

“I was looking at an IPS article about the gender goal which said it is not a wish-list but a to-do list, so then I used it for the call to action (in Santiago),” she said.

The Santiago call to action calls for a renewed political commitment to close remaining gaps and to guarantee full implementation of the 12 critical areas of the Beijing Platform for Action by 2020.

This includes balanced representation of women and men in all international decision-making processes, including the Post-2015 Development Agenda, the SDGs, financing for development and climate change processes.

It also includes the empowerment of women, the realisation of human rights of women and girls, and an end to gender inequality by 2030 and to the funding gap on gender equality, as well as the matching of commitments with means of implementation.

The executive director of Oxfam International, Winnie Byanyima of Uganda, told IPS that in the post-2015 agenda, “gender equality should be measured in all the goals, in other words, each goal must be measured for how it is achieved for men and for women, in different ethnic groups, in cities, in rural areas….so that we will know that each sustainable development goal has been achieved not only for men but also for women, not only for boys but also for girls, rather than averages.”

She stressed that “the technical groups working within…the United Nations must make sure that they select standards and indicators that are going to be measurable in a gender disaggregated way so that all countries are able to collect gender disaggregated data to enable monitoring progress for men and women.”

In the conference’s closing event, Chilean President Michelle Bachelet said that “for those of us who have taken part in this gathering, it is not possible to think of a successful development agenda that does not have at its heart the central aim of achieving equality between boys and girls, and men and women.”

“We need the banner of equality to wave soon in all nations, and we must be optimistic, because we have a real possibility to make every place on earth more humane, more just, more dignified, for each person who lives there,” she said.